Last night, we went to an awesome election party hosted by Oscar-winning movie producer (and Halston owner!) Harvey Weinstein. Besides Obama’s victory, a highlight was the moment I took this picture of MrB and our friends Norm and Jane. Look who was lurking in the background. 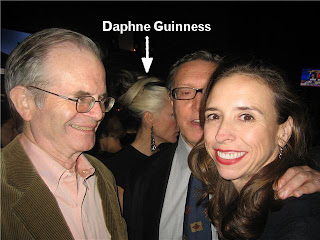 My Ossie Clark dress received good reviews at the party (Jane just emailed me saying I should consider wearing the dress “every day”) and is now officially one of my favorite clothing items as well as a “lucky” dress. I wanted to get a closer shot of it than in last night’s post, but posing with a squirmy Gigi was not easy. That dog is all over you like white on rice until you bring out a camera, and then she’s running for cover under the bed. She also does this thing where she goes up to people on the street, wagging her tail, and when they try to pet her she ducks away from them. 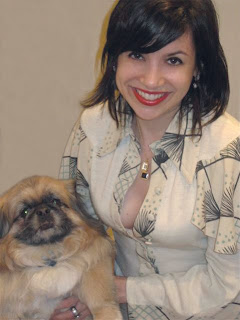 My lucky Ossie dress and crazy dog.
I’m wearing my new Clemence Necklace.
As a small-business owner, the first thing I thought of when I saw Michelle Obama on TV was, “Who is the lucky bitch who designed her dress and how fast is that going to sell out?” The first place I saw any information was on Red Carpet Fashion Awards. Gorgeous blogger Fashion Critic had a hunch that it was by Narciso Rodriguez and my friend Cheryl Tan at the Wall Street Journal has confirmed that. Damn! That Narciso might have some business challenges, but he sure gets his dresses on the right people at the right moments. First Carolyn Bessette‘s wedding to JFK Jr. and now Michelle Obama on election night. 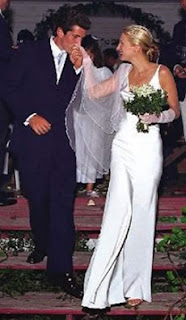 Isn’t it a shame that Ms. Obama wasn’t wearing my beautiful Boleyn Necklace? 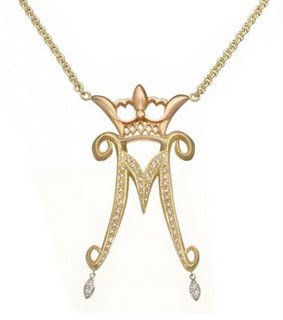 Michelle, call me! I’ll give you a good deal!

Note: Thanks to ENC for prettifying my photos.

UPDATED TO ADD: The New York Times noted a funny exchange between Harvey and MrB. Scroll down to New York Parties Like Ohio.

You might also like
Olivia Colman's Dress; Week in Review
What Wendy Wore: Ossie Clark at Lincoln Center
Throwback Thursday: Pre-Camera-Phone Selfie
Previous Post: « Calling My Name
Next Post: What Kind of Fruit Are You? »