In March, when Rihanna and Eminem announced the dates for their joint, three-city Monster Tour, I wasn’t sure what tickets to get.  It would be practical to get seated tickets, but in huge venues like New Jersey’s MetLife Stadium, which has over 80,000 seats, even the best seats are fairly far away from the stage. I thought maybe I’d want to brave general admission for a spot on the floor, similar to what my sister and I did in 2011 at Lollapalooza. That experience was harrowing, but unforgettable. I was sure I could cope with the early arrival and day-long wait necessary for a great standing spot in GA, but would I be able to recruit a friend to accompany me? Under pressure when tickets went on sale for the August tour dates, I decided to not decide: I got seated tickets for Saturday’s show and GA/standing tickets for Sunday. After all, I had months to figure out a plan and sell the extra tickets.

Time flies, as it does, and even though I couldn’t think of any ardent Eminem or Rihanna fans among my friends and the concert weekend was looming, I couldn’t bear to sell those floor tickets. Between the time the tickets went on sale and the show dates, I purchased tickets for and attended an Eminem solo show at the 90,000-seat Wembley Stadium in London. I had great seats for that but still felt so far away. I kept looking at the people right in front of the stage and thinking, “I wish I were there.”  Finally, with mere days to go, I turned to my gorgeous and generous friend Jen. My birthday is in December, but Jen often treats me to a celebratory concert or play in the spring. That timing is just our tradition. Back in March, I had shyly mentioned that the best gift would be her company at the Monster Tour, but I hadn’t want to force the issue. She definitely didn’t fall into the ardent fan category and it seemed too much to ask. But, last week, I decided to throw myself on her mercy and she cheerfully said yes, because that’s the kind of person she is.

Therefore, on Saturday, I used the seated tickets with MrB.  We wound up getting there shortly after doors opened because we weren’t sure how challenging it would be to get on one of the buses running between Port Authority and the stadium. (It wasn’t challenging at all, either getting there or getting back. Great service!) 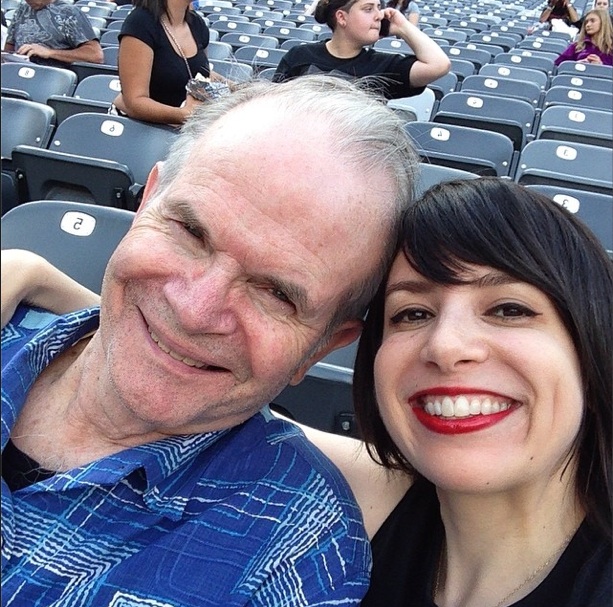 When I posted this photo on Instagram I pointed out that you can’t judge a book by its cover: This man was attending his THIRD Eminem show.

If you’re ever going to a music event at MetLife, you can’t do much better than seats in the second row of section 142 on the side of the stage. (Well, you could do the first row!) The front of that section is as close as you can get without being on the floor. When we arrived in 142 on Saturday, only the diehard, front-of-the-stage people were in position, so I got to study the set-up. I noticed that it seemed very civilized and I was encouraged. 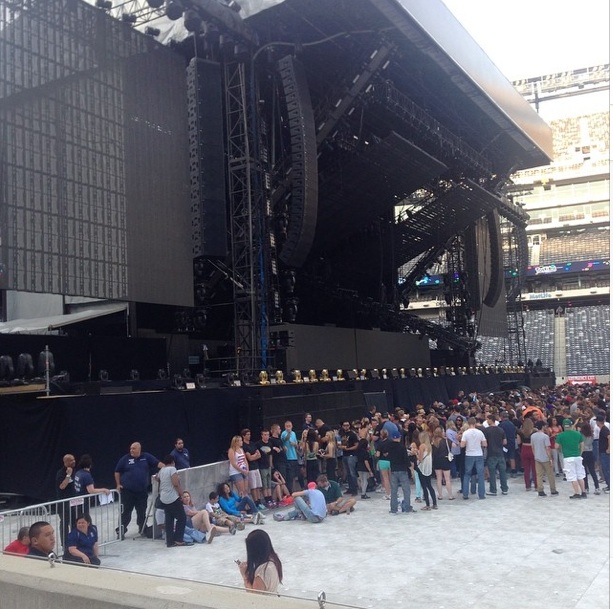 Here are the first 10 minutes of the show from section 142.

That’s actor Michael Imperioli — Christopher Moltisanti on The Sopranos — in the video clip that kicks off the show. Whenever I see him, I remember the conversation his character had with his girlfriend Adriana (Drea de Matteo) about his dream of leaving the Mafia to become a male model. LOL.

After Saturday night, I would have been kicking myself if I’d gotten rid of the floor tickets, because I couldn’t wait to see it all again, closer up. I had learned some valuable lessons from my Lollapalooza experience, so I was back at the stadium on Sunday at 10 a.m. on the dot, when the line was officially open. That’s when I learned that if you’re really dedicated, you hop the fence at 6 a.m. before security gets there. Dammit! 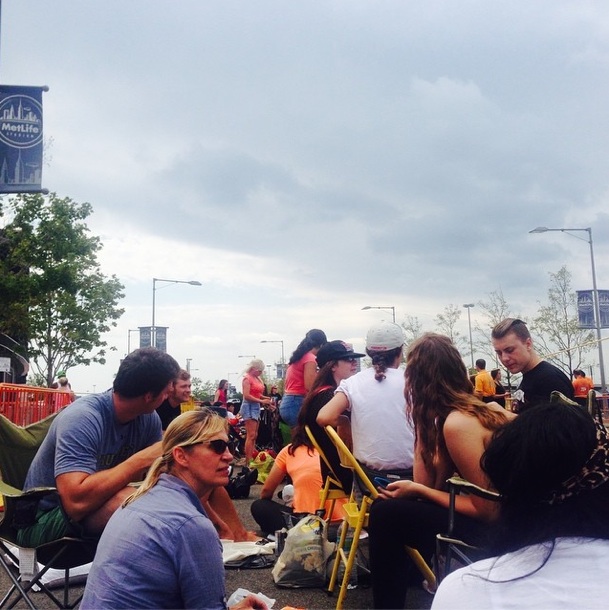 People who drove were able to bring chairs and put them back in their cars before the show.

There still weren’t many people in front of me — maybe 50 — and I made a few friends by inviting people to share a drugstore tablecloth I brought along to sit on. One of those new friends was Jessie, a veteran of general-admission concerts, who got on line shortly before me. I offered her some Goldfish pretzels and, in return, she gave me helpful tips while I was waiting for Jen to arrive. For instance, bringing an umbrella for shade is better than just wearing a hat. I was interested to learn that Jessie usually went to GA shows alone. I found that idea a lot less scary after being there for a little while because the MetLife crowd was much friendlier than the one at Lollapalooza. (Though I guess you can’t predict these things because Jessie told me that the most violent crowd she was ever in was the audience for … emo songstress Lana Del Rey.) In fact, the whole Monster Tour experience was a breeze compared to Lollapalooza, where we had to run to the field in front of the stage and wait standing up, defending our spots constantly, for 9 1/2 hours. It did get ferociously hot on the asphalt in front of MetLife but we had occasional cloud cover and at least most of our waiting was done outside the stadium where we could sit, visit a misting tent and buy cold drinks from vendors. Jen and I shared a giant cherry-flavored Italian ice. 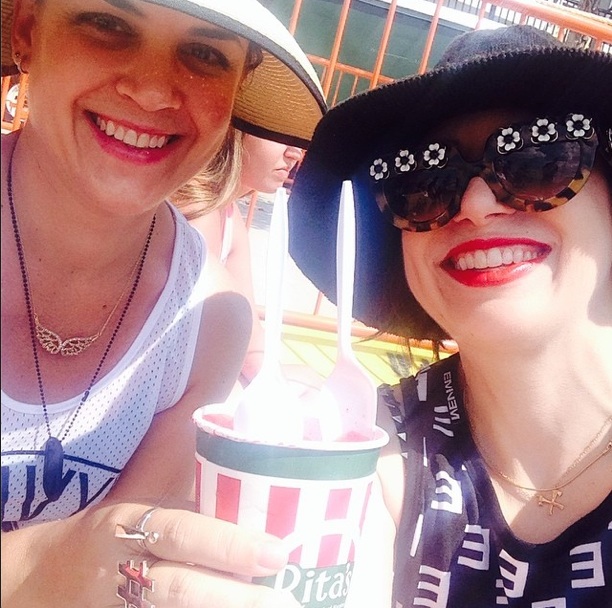 Eating this helped alleviate the heat.

“This is so much worse than I expected,” moaned a gal named Michelle, as she wilted in the heat on a corner of my tablecloth. Meanwhile, I kept saying to Jen, “This is so much easier than I expected!” I decided misting tents and Italian ices were my new favorite things. Despite all the time we had, I never took a full outfit photo, but in the photo above you can see my Prada sunglasses from 2013; the hat I wore to Lollapalooza in 2011; the denim Current/Elliott shorts I got this summer; and the Eminem t-shirt I got at Wembley in July. I also wore the Prada sneakers I wore to Lollapalooza. Those really work well for long days. I kept the jewelry minimal: Skylar Grey double-ax necklace; middle finger and sign of the horns emoji earrings; and letter rings for my left hand. 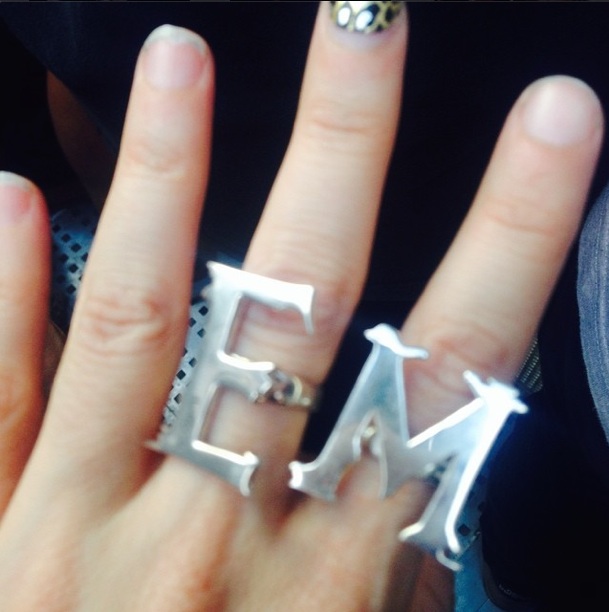 I would have worn “Ri” on my other hand, except I was all out of “R” rings! 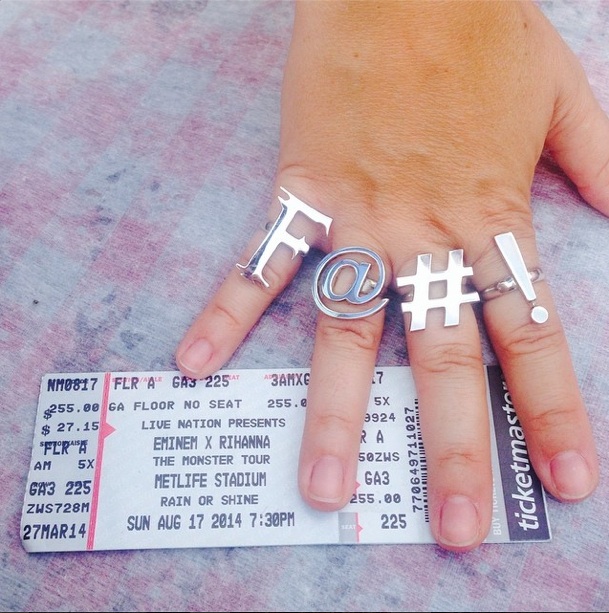 We were told we would get wristbands at 5 p.m. so shortly before that, everyone went to put their stuff in their cars or kicked things they weren’t keeping to the curb — the latter category included my drugstore tablecloth. (Important piece of advice for anyone who wants to attempt this sort of thing: Make sure you’re bringing nothing in except your money, phone and camera to make going through security as quick as possible. No bag, no nothing!) We got the wristbands and immediately bunched up in order to move a few inches forward, even though the keepers of the line told us, “Don’t bunch up!” 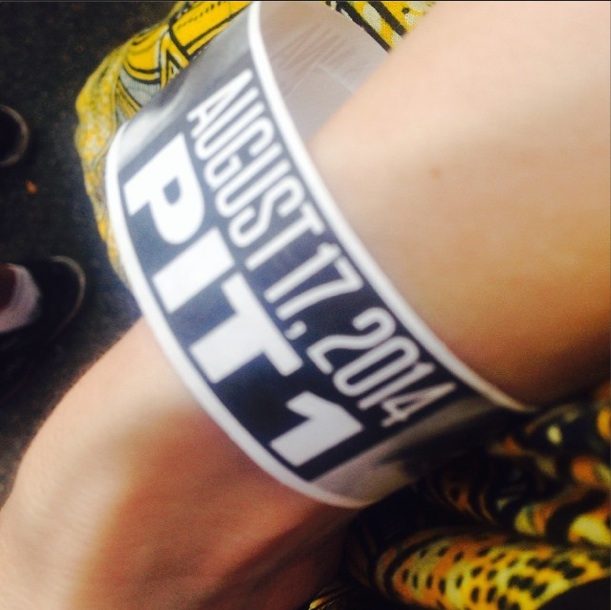 This made it official.

Then security came by with a big rope and pulled it across the line right in back of Jen. They were dividing the crowd into segments in order to keep the entry controlled and we just squeaked into the first group. Woot! We raced through security and ran to the next checkpoint, with me holding Jen’s hand tightly. I wish I took video of what happened next. I saw someone else doing it, so maybe I’ll find it online. A number of security people stretched out a big rope. We all bunched up behind the rope and then security slowly walked backward, keeping everyone behind the rope and trying to prevent the running that can lead to disaster. The security folks had a tough time, stopping frequently to shout at the people in the back — we were only about three or four deep — for “pushing.” But we weren’t! It was the people in the front who were having trouble controlling their urge to run. Finally, the main security guy, who was very red in the face, warned us one more time that anyone who ran would be thrown out, then screamed “DROP THE ROPE!” at his colleagues. Everyone walked a few steps and then ran like hell. Jen and I landed second row, center. 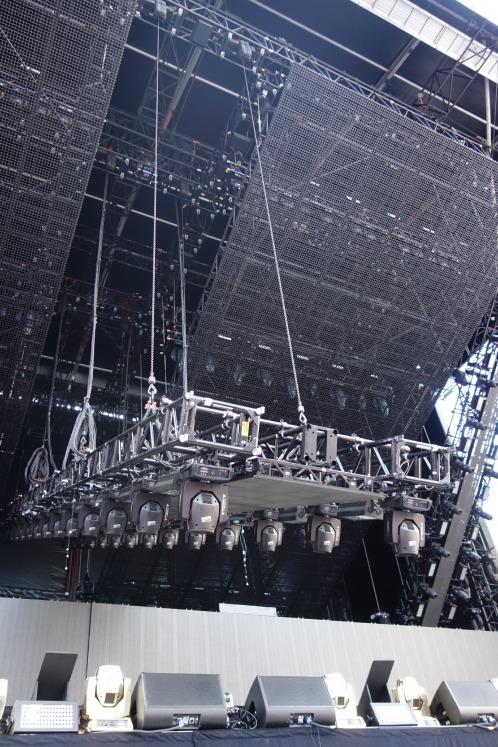 The stage from our spot.

We were so pleased with ourselves. 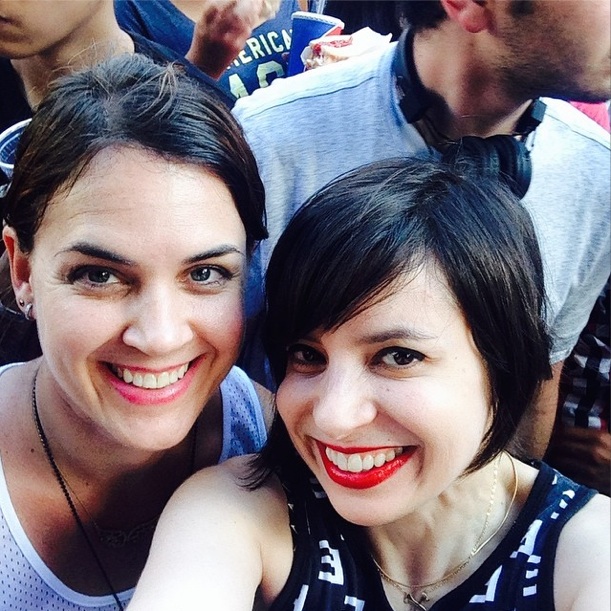 We were mere feet away from Eminem’s most notorious real-life Stan, Zolt. You know you’ve gotten a good spot when you’re near the No. 1 obsessed fan. 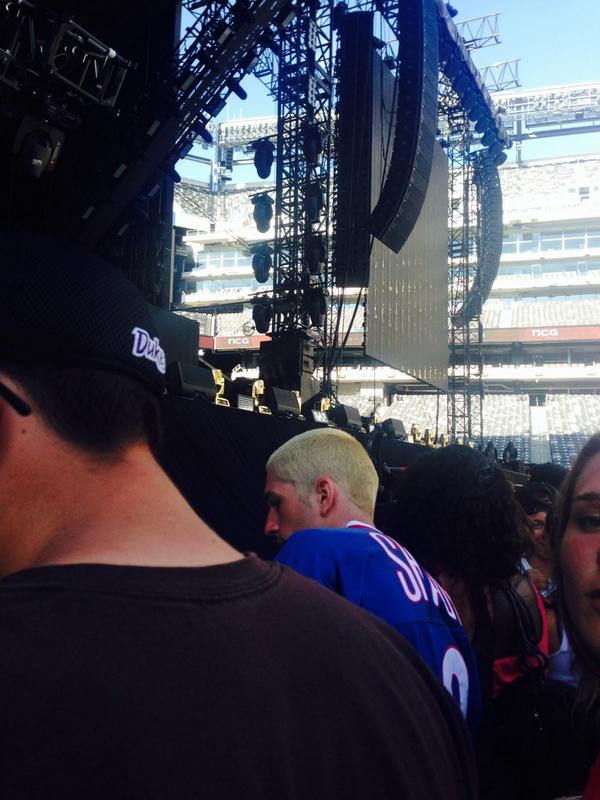 This guy lives his life as Em. I’m serious.

All day, a bunch of camera guys from Eminem’s Shady Films were filming and interviewing people for a “project about Eminem’s fans,” but I suspect anything that comes out of this is largely going to be about Zolt.  He was talking to the camera people for ages while on line. 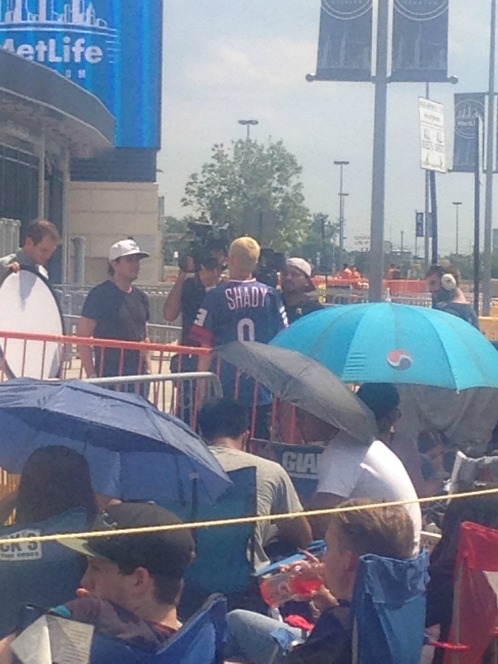 Zolt with his camera crew outside the stadium.

During the show, there was a single camera guy focused on Zolt for nearly the entire concert. A producer even handed him a bottle of water like he was the on-camera “talent.” I wonder if this is a strategic move: Make a guy feel like the star he wants to be, and you won’t receive an invitation to join his Catcher in the Rye book club.

Anyway, we were in position by 6 p.m. Despite the open-air stadium, we were now out of the sun. The last couple of hours before the show started shortly after 8 p.m. continued to be heavenly compared to Lollapalooza. Drink vendors were stationed between the stage and the front row selling Gatorade and water. You could also slip out of the crowd, walk over to a beer/wine stand on the side of the floor, and get back to your spot. LUXURY! Jen and I shared a beer and a water and waited for the show to start … and I’ll wait for my next post to write about the concert itself.

UPDATED SATURDAY, AUG. 23, TO ADD: Here is my post about the concert.