This is my last post on this year’s Oscars, or at least I hope so. I didn’t mean to make this into a series that goes on too long, like The Walking Dead. In case you missed my other Academy Awards-related posts, here they are:

There’s also an interesting story from the Hollywood Reporter, which in 2017 ran an article by Laurie Brookins that explained how celebrities are paid big bucks to wear brands on the red carpet (no wonder the ones who can’t even manage a free dress are angry!). Vincent Boucher has a 2019 update in the same publication, reporting that a single red-carpet look could be worth $200,000 or more to the person wearing it. Read the article and then ask me again, “Why don’t you get lots of celebrities to wear your jewelry?!” and by “ask me again,” I mean don’t ask me that ever again.

Anyway, the big story of the 2019 Oscars — and I mean literally big — was Lady Gaga’s priceless loaner necklace from Tiffany.

The centerpiece of the necklace was the Tiffany diamond — a specially faceted, 128.54-carat yellow diamond that has only been worn in public twice before, neither time on the red carpet. According to Tiffany’s website, “Mary Whitehouse wore a lavish necklace set with the diamond for the 1957 Tiffany Ball in Newport, Rhode Island; and Audrey Hepburn wore a Jean Schlumberger necklace of diamond ribbons surrounding the diamond in publicity photographs for the 1961 film Breakfast at Tiffany’s.” To celebrate Tiffany’s 175th anniversary in 2012, the yellow diamond was set in a necklace of white diamonds totaling over 100 carats. Jewelry expert Marion Fasel of The Adventurine says what Gaga wore on Oscar night was based on the 2012 design but customized to fit her. FYI: Wearing a substantial necklace like this is different from putting on a chain that has a pendant on it. This kind of necklace has to be articulated to move with the body.

Obviously, it was a huge coup for Gaga to get to wear this. The fact she already had a relationship with the brand — having done its first Super Bowl commercial in 2017 — paved the way, but it was also an acknowledgement of her current A Star Is Born star power and the confidence Tiffany had in Gaga winning an Oscar for her song “Shallow.” As Olivia Colman and her stylist discovered, when you’re hot in Hollywood, you’re hot in fashion too. Special shout-out to Gaga for wearing her Tiffany with long, leather gloves for her red-carpet arrival; leather gloves for special occasions always make me think of my designing friend Stacy Lomman in her 2010 New Year’s Eve outfit.

In other red-carpet jewelry news, man brooches are going strong, making me hope I’ll get another commission for one soon. Holla at me with your man brooch requests! 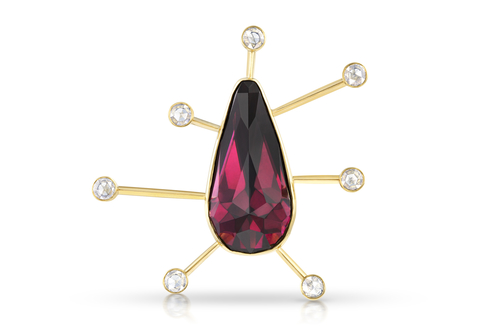 My favorite jewelry look of the night — my Best Dressed/Wear What You Want jewelry choice — was worn by Hannah Beachler, who won the Oscar for production design for Black Panther. Douriean Fletcher, the jeweler for the movie, made Beachler a face chain and ear cuff befitting Black Panther‘s Wakanda style.

Speaking of Black Panther style, Beachler’s colleague, Ruth Carter, won an Oscar for the movie’s costume design. Beachler and Carter were the first two black women to win their categories — Beachler was the first black person even nominated in her category. Both of them gave moving speeches; if you missed them, you can watch them here.