In 1993, Walmart and Kmart refused to stock Nirvana’s In Utero CD due to depictions of fetuses in a collage on the back cover and the title of the song “Rape Me.”  Geffen, the band’s label, initially declined to make any changes, but with discount stores responsible for nearly a quarter of all record sales, In Utero‘s nearly twice-platinum sales proved to be disappointing compared to the five-million-album sales of Nirvana’s previous album, Nevermind.  According to Entertainment Weekly, Geffen’s marketing staff re-approached the band in early 1994 and got the three members to agree to remove the fetus images and change the song title printed on the cover to “Waif Me.” (The actual recording wasn’t changed.)

Original art on the left, Walmart art on the right. Arrows point to song title.

Nirvana’s spokeswoman, Janet Billig, spun the capitulation by noting that Nirvana members Kurt Cobain and Krist Novoselic grew up in Aberdeen, Wash., where “the only place they were able to get their music was Wal-Mart and Kmart.” She said, “They really want to make their music available to kids who don’t have the opportunity to go to mom-and-pop stores. They feel strongly enough to make some alterations.”  Hmm. I’m sure they had some other strong feelings too, considering that Cobain wrote “Corporate Magazines Still Suck” on a t-shirt and wore it for a Rolling Stone cover shoot in 1992. That wasn’t the only time he made a statement like that. I still have a worse-for-wear 1994 Nirvana t-shirt that has this on the back. 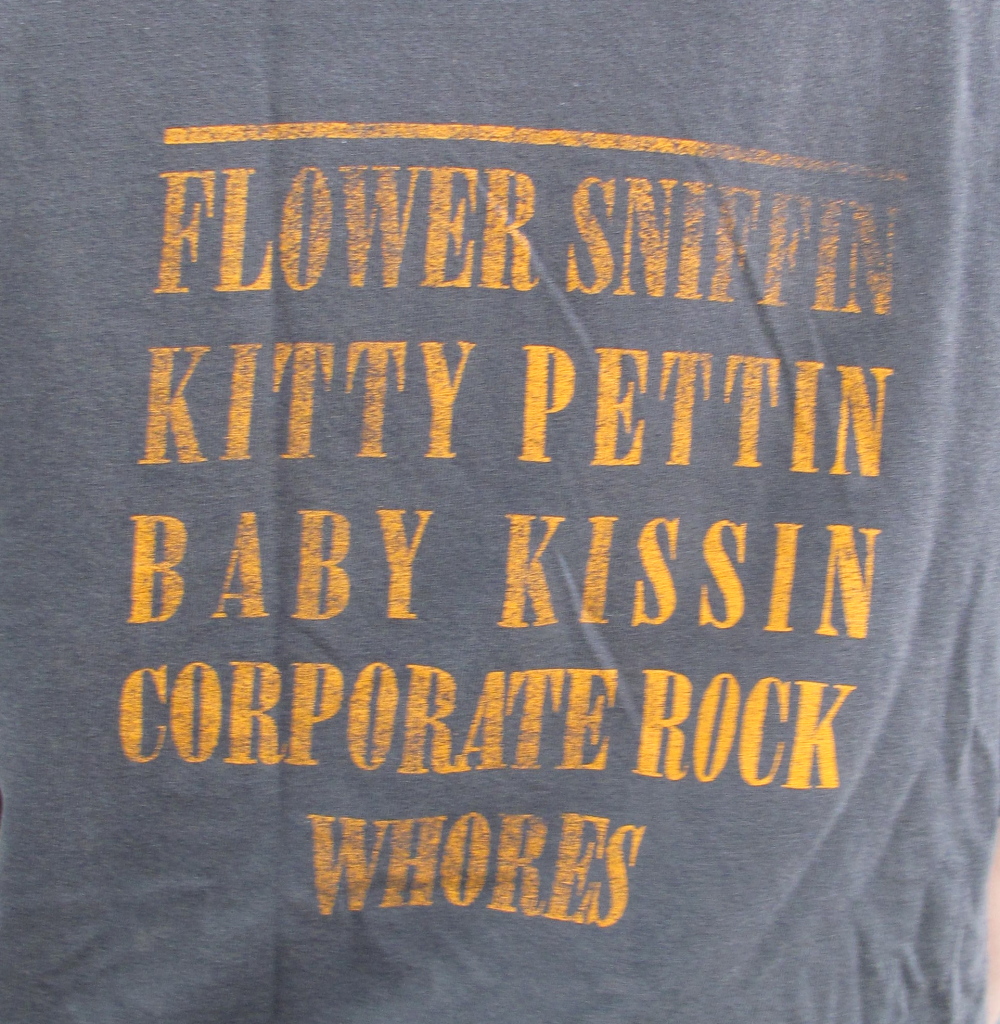 Eerily, the Entertainment Weekly issue with the Walmart story was dated April 8, 1994 — which turned out to be the day that Kurt Cobain was discovered dead of suicide from a shotgun he had a friend buy for him, not from a Walmart, but from Stan’s Gun Shop in Seattle, Wash.  (The EW story on his death was in the April 22, 1994, issue.)

Two years later, the “Waif Me” song title was used as an example in a Nov. 12, 1996, New York Times story by Neil Strauss called “Wal-Mart’s CD Standards Are Changing Pop Music.” The article said that Walmart was the number one seller of music in the country and that it, combined with other cost-cutting chains, “are forcing independent retailers out of business, making unaltered music and videos harder to find. In Charlotte [North Carolina], 8 of 13 independent record stores have gone out of business in the last year.” White Zombie, another band on the Geffen label, “very reluctantly” caved to Walmart’s demand for changes to its album for the same reason Nirvana did; as the band’s manager told the Times, singer Rob Zombie ”comes from a small town in Massachusetts and the only place he could ever buy records was Wal-Mart.”

You know who had the guts to tell Walmart to go fuck itself — sales be damned — when Kurt Cobain and Rob Zombie did not? Sheryl Crow.

“Wal-Mart recently chose not to carry Sheryl Crow’s new album because of a lyric that accused the chain of selling guns to children. (Wal-Mart carries rifles, knives, handcuffs and handgun ammunition, though it says that nothing is sold in violation of Government regulations.) A spokesman for the record label that Ms. Crow records for, A&M, said the chain asked the company to change the offending lyric not just on copies sold in Wal-Mart but in all copies. (Mr. Ingram of Wal-Mart denied this, saying no attempt at negotiation was made with the label.) Ms. Crow decided not to remove the lyric. In the end, said Al Cafaro, the chairman of A&M, she sacrificed 10 percent of her sales.”

The lyrics in question were in the song “Love Is a Good Thing,” which was co-written with Tad Wadhams:

“Watch out sister,
watch out brother,
Watch our children as they kill each other
with a gun they bought at the Wal-Mart discount stores.”

Like Cobain and Zombie, Crow grew up “in the heart of Wal-Mart country” in Missouri, as a Sept. 10, 1996, Los Angeles Times story pointed out, adding that Crow was worried her sister wouldn’t be able to buy her new album because of Walmart’s monopoly on music sales. In that article, a Walmart spokesman “characterized the lyrics as an unfair attack on the Bentonville, Ark.-based chain, which he said has strict policies prohibiting the sale of guns to minors. He said the company believes that the song insults Wal-Mart employees, many of whom are involved in charities for children.” Framing it as moral issue, the spokesman said, “Selling a record implying behavior that is against all we stand for is something we just could not profit from.” Profiting from guns and ammunition, of course, was another matter.

All of this is on my mind because today — more than 20 years after Walmart refused to sell a record that called out the chain for selling guns and a month after more than 20 people were shot to death in an El Paso, Texas, Walmart — the company decided to cut back on selling actual guns and ammunition after its current stock is sold out. CNN reported:

“The company, America’s largest retailer, said it will stop selling handgun ammunition and ‘short-barrel rifle ammunition,’such as the .223 caliber and 5.56 caliber, that can also be used on assault-style weapons after selling all of its current inventory. Walmart will also stop selling handguns in Alaska, the only state where it still sells handguns. And Walmart will request that customers no longer openly carry guns into its 4,700 US stores, or its Sam’s Club stores, in states that allow open carry.”

I’m know I’m not the only one who thinks that this is driven by fears about potential liability costs. That would be par for the course, seeing as Wal-Mart stopped selling handguns in its stores in 1994 — making them available only through catalogs — “after the company was sued by relatives of a Texas man who allegedly killed his parents with a gun bought at a Wal-Mart even though he had indicated on a federal form that he had been treated for mental problems,” according to the L.A. Times article about Sheryl Crow. (Wal-Mart denied that the handgun decision was related to the lawsuit. Just a coincidence! Nothing to see here!)

Regardless of the motivation for the ammo ban, I’m relieved it’s happening. The “request” to stop the open carry of guns in Walmart stores also makes sense considering the burden it has been on police lately as fellow shoppers — unable to tell if an individual carrying a rifle in a Walmart is merely compensating for feelings of inadequacy or is an actual threat — have panicked at the sight of guns, resulting in law-enforcement involvement. (In yet another sign of Walmart’s outsize influence, rival chain Kroger announced the same “request” hours after Walmart’s statement.)

However, I remain sickened by the decades of unnecessary gun deaths that were facilitated by this society-shaping mega-retailer that aggressively censored musicians but feigned helplessness in the face of the gun culture that it helped normalize … all while making its founders and biggest shareholders, the Waltons, the richest family in the world. I’m also nauseated by the lack of logic long displayed by everyone who claimed the only way to reduce gun deaths was more “good guys with guns” ready to take down the “bad guys with guns.” I’m sure those people are still exhausted from the mental gymnastics they had to do to sustain that argument when less than 24 hours after the massacre in the El Paso Walmart, a shooter in Dayton, Ohio, killed nine people in 32 seconds before he was fatally shot by police. Or maybe they didn’t suffer any cognitive dissonance at all. Maybe they’re celebrating a success story, because “only” nine people died. I mean, it could have been 19. That thought process is entirely possible, considering how much of the country has been gaslighted into believing might is right, money is right, monopolies benefit consumers, all laws are moral, and nothing can ever change. But the truth is that change, as overdue as it is, is very much possible. Even the Waltons know that now. Let’s keep up the pressure.

UPDATED WEDNESDAY, SEPT. 4, 2019: Thanks to ThatChelseaGirl on Twitter, who pointed out the 1996 L.A. Times article about Sheryl Crow, which I then added to this post.

You might also like
'80s Hair Club for Musical Men
Meet Gorgeous Rapper Gangsta Boo (and Her Jewelry)
For Doors Stans: Pamela Courson's Mother Has Died
Previous Post: « The Week in Review, Plus a Labor Day Discount
Next Post: Chicago-Area Peeps! Come See Me in Oak Brook »