A real patriot puts country over party or president. I’m thankful to the whistleblower who recorded, in a memo, a White House official’s view that “… the President had clearly committed a criminal act by urging a foreign power to investigate a U.S. person for the purposes of advancing his own reelection bid in 2020” during a phone call with the Ukrainian president in July. Thanks also to Trump for being arrogant enough to release an (edited) transcript of the call that proves, rather than disproves, his guilt.

Jewelry-wise, the news has inspired me to get my Virginia Woolf whistle necklace out of the vault. This is one of my earliest designs to feature both the intricacy and heft that have become signatures of my line. First, the heft: The 18K gold whistle weighs an amazing 1.4 troy ounces. Unless you’re in the jewelry industry yourself, you probably haven’t ever felt anything like this. The satin-finish of the metal is balanced by 112 diamonds — totaling 1.13 carats. 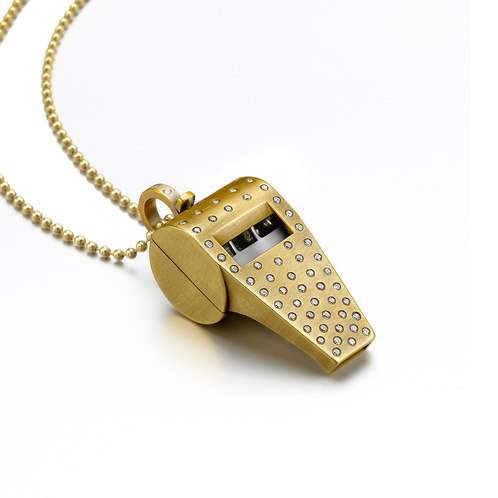 Now for the intricacy: The whistle pops open to reveal a little wolf with tiny diamond eyes. That said, the real engineering feat is that the whistle really works. You’ve gotta buy it to blow it though! I don’t let random people put their mouths on the jewelry no matter how nicely they ask. 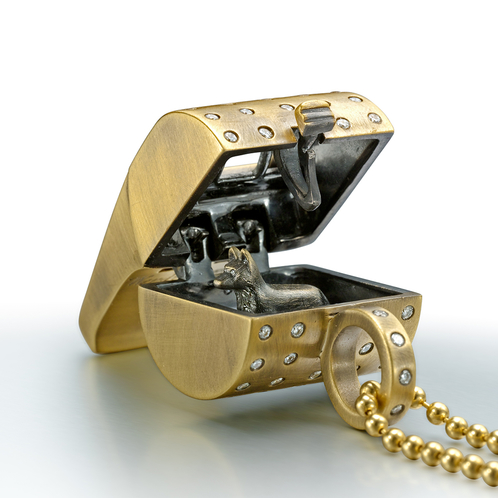 This piece was inspired by a vintage “wolf whistle” charm that was about the size of my thumbnail and didn’t actually whistle. As I’ve said before, I’m often inspired by antique and vintage jewelry, but my goal is to make my piece better and better than the original and add a feminist twist — so that’s how the tiny “wolf” whistle turned into my massive Virginia Woolf whistle.

You can get a sense of the design’s size and mechanics from this video.

I’ll be doing two more Jewel of the Month posts for October!

You might also like
A Description of My Jewelry Designs
Cyber Monday: Buy! Buy! Buy! Give! Give! Give!
Keep Up the Protests and End the NRA
Previous Post: « Came Through Drippin’
Next Post: Jewels of the Month, Part 2: October Birthstone »