Throwback Thursday is a good time for me to wish a belated happy anniversary to JCK, the bible of the jewelry trade, which has been celebrating its 150th year in business throughout 2019. Yes, you read that number right! It’s been 150 years since the American Horological Journal — the watch-oriented progenitor of today’s sleek JCK magazine — was first published in 1869. That makes JCK a young whippersnapper compared to the New York Times, which was launched 168 years ago, but well-seasoned compared to the 130-year-old Wall Street Journal.

To celebrate the occasion, JCK interviewed 150 jewelry professionals for a series of articles, and my quote appeared in the July/August issue of the print magazine. I said:

“JCK writers and editors were among my earliest supporters, even though I was so different from many of the brands they typically covered. When they saw potential in me, I saw more of it in myself.”

That feeling I described … well, I had it all over again when I saw the page. I had figured if my quote was illustrated at all, it would be with a little headshot. Instead, there’s a huge picture of my Pink Elephant and Tipsy Writer Maneater ring! 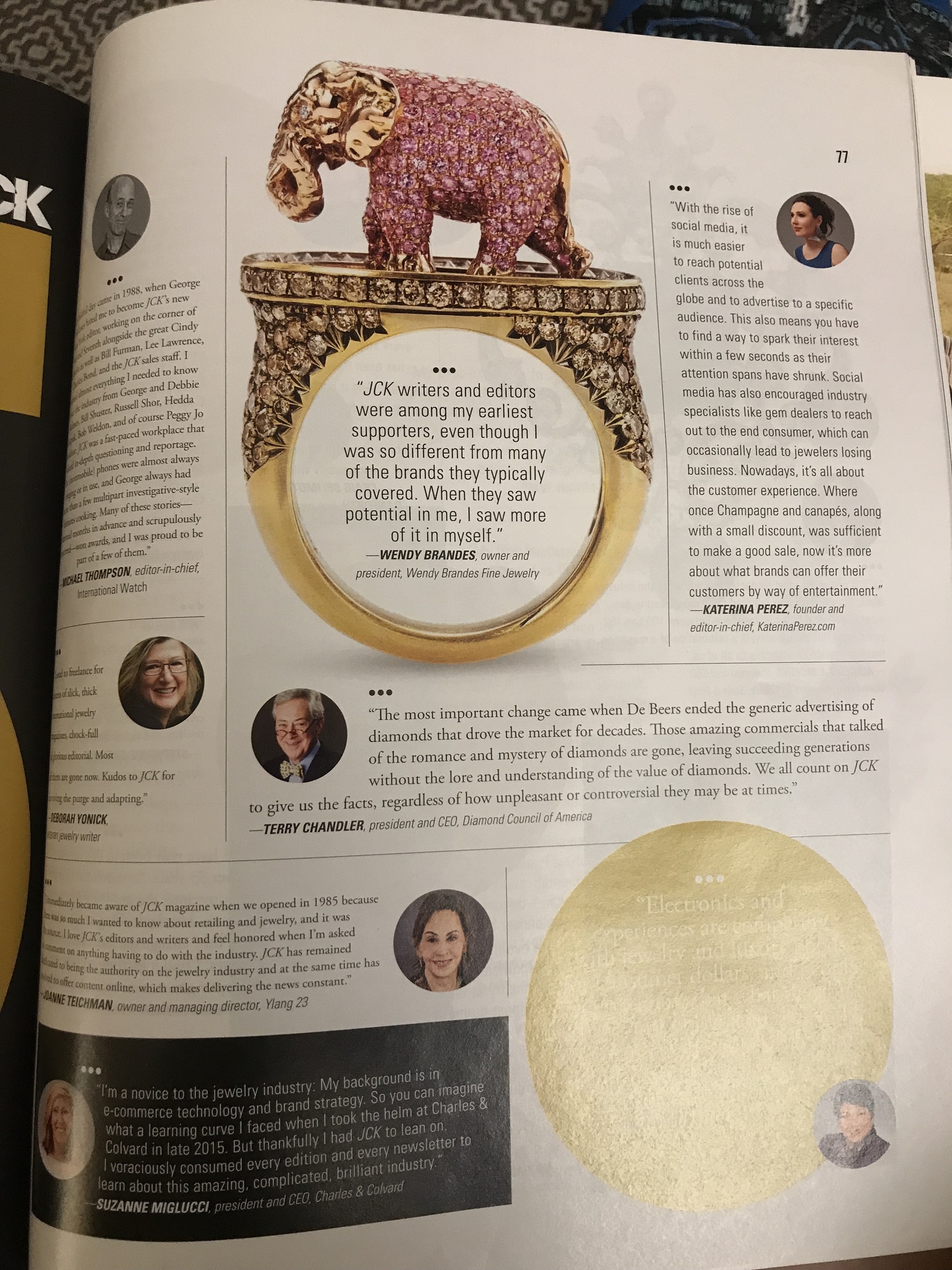 Truly, the JCK folks have given my morale a boost because, to paraphrase a line attributed to actress Bette Davis, fine jewelry ain’t no place for sissies. Pretty much every small designer I know is challenged by the high cost of raw materials and U.S. labor. And, until recent developments in social media and e-commerce, a designer absolutely had to get a case in a physical store, only to face the hell that is consignment. As a bonus, my muse is a spiteful one, because following her has definitely forced me to jump over more and higher hurdles. My elaborate, one-of-a-kind, mini-sculptures require me to invest in the best of the best of the best in expensive U.S. jewelry skills …

… but I don’t work with the big diamonds, rubies, sapphires, or emeralds that signal, “BIG INVESTMENT!” and “IMPRESS YOUR FRIENDS!” to jewelry customers. I also don’t have a famous family name or corporate brand that conveys a certain level of glamour and luxury. Nope! The value of my jewelry is entirely in the art. That said, I often think about how, unlike most art, the components of my work have intrinsic value. Take that pink elephant ring apart (I mean, you definitely should not do that, but it is physically possible), and you’ll still have gold, diamonds, and colored gemstones that are worth something. Disassemble a painting and you have … what? A canvas, a frame, some flakes of paint? A priceless Stradivarius violin can be reduced to a small pile of old wood. Then there’s the 3′-tall, stainless steel bunny sculpture by artist Jeff Koons that was sold this year for a record $91 million. Go ahead and melt that down and see what it’s worth then. (Spoiler alert: It’s worth nothing.) Another plus for fine jewelry is that it’s highly transportable in case of emergency, which is something I’ve always liked about it but ponder more frequently lately considering the state of the world. You’re not going to be able to put a Warhol or Picasso in your pocket and make a run for it.

Last winter, the Metropolitan Museum of Art had an exhibit called “Jewelry: The Body Transformed” which noted that jewelry is the oldest physical art form, “predating cave paintings by tens of thousands of years.” It makes sense when you think about it, because prehistoric hunter-gatherer societies migrated with their food supply and, as I pointed out, it’s easy to take jewelry along. So jewelry — or, at least, jewelry made by artists, rather than jewelry that is commoditized and mass-produced — is an ancient art, a valuable art, a transportable art, and a beautiful art. Yet, it is often seen as lesser than other arts because it is worn and, in recent centuries, worn mostly by women. Two years ago, that was the subject of a museum exhibit in Paris called “Medusa, bijoux et tabous” (Medusa, jewellery and taboos). Last October, inspired by my memories of that French exhibit and in anticipation of the Met’s take on jewelry, I recorded this video.

This reminds me to thank the jewelry-appreciating JLRY Instagram account for featuring the Pink Elephant ring and its six siblings — my entire seven-piece Maneater Ring collection. The caption totally made my day/week/month.

In absolute awe of these impeccably detailed pieces by @wendybrandesjewelry There is so much detail to touch upon but let’s keep it simple! The setting of the stones cannot be flawed. I love the concepts of the individual pieces… beautifully captured!👌🏾 My fave is the 🚕. Detailed inside the ring is likely your typical Manhattanite broker hailing the very Taxi which is the centrepiece of the ring!🤣 Fuck! These are the details that get me… like why?! Nobody besides the owner will really be able to enjoy this! You can see the love for the craft ❤️ @wendybrandesjewelry thanks!

All of the rings are listed separately on my website and 1stdibs, but honestly, I hope that a collector to buy all seven of them (Total cost: Well below $91 million). They have more meaning as a series — a feeling that was validated when I saw the recent Warhol exhibit at the Whitney Museum. The exhibition notes pointed out that five of Warhol’s 32 Campbell’s Soup Can paintings were sold before Irving Blum, the art dealer, realized that the multiple canvasses should remain together as a single piece of art. He bought back the ones he sold!

My dream collector would have the right of first refusal for the final, biggest, and most masterful Maneater design — a necklace that I have been making bit by bit, whenever I have the time and money, for THREE YEARS. I originally planned to do eight rings but changed the eight design to a statement necklace when I came across this labradorite carving in late 2015.

I was optimistic for a 2016 necklace debut, as you can see from the caption above. Silly me. It’s 2019 and I’m still scouting the perfect gem to go with the carving.

So even though the Maneater rings have been Jewels of the Month before, they’re in the spotlight again for August 2019. I’ve also said before that I designed them to be museum-worthy, but I now feel more confident than ever that they will someday be displayed in a museum all together — the seven rings and one necklace. I do hope I’m around to see it.

You might also like
Wendy Brandes Jewelry X The Style Crone, Part 6
Three Bloggers, Two Hats, One Ring
Valentine's Day Reminder: Down to the Wire for Jewelry!
Previous Post: « Candidates Worthy of Your Support
Next Post: Flashback: The Agony and Ecstasy of a Small Business »