Yesterday, I went to Washington, D.C., for the “Never Again Is Now” protest organized by #JewsAgainstIce and immigrant-rights organization Movimiento Cosecha. 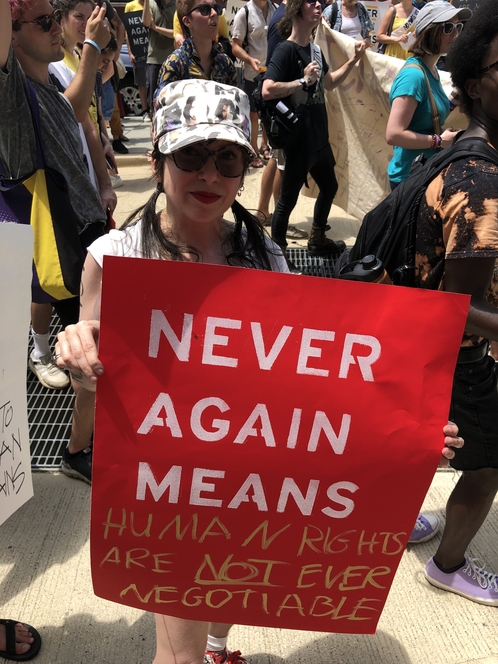 Hundreds of peaceful activists marched from the National Mall …

… and surrounded the Immigration and Customs Enforcement building with the goal of disrupting business as usual.

One of the leaders from yesterday’s #neveragainisnow #iceshutdown protest in DC yesterday. Lizzy kept up this energy for the entire day in 90+ degree heat.

We succeeded! An email from ICE’s Acting Director Matthew Albence — leaked to The Young Turks website — confirmed the building was placed in a “lock down condition” as 10 protestors were arrested in the lobby while others linked arms to block the building entrances and stop traffic on streets. 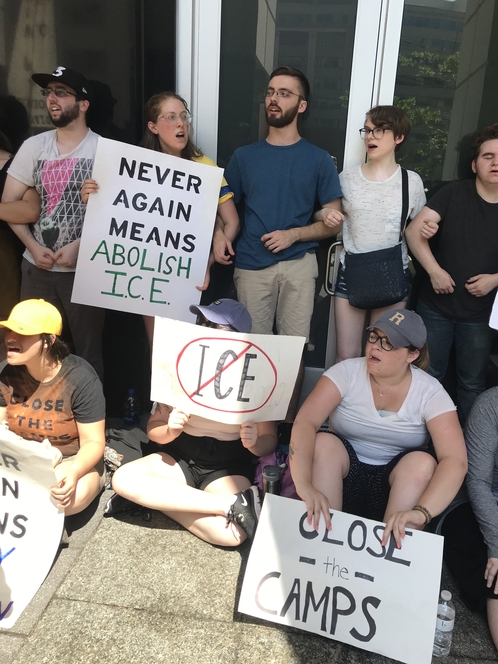 The people with the linked arms were prepared to be arrested, but only the people inside the building were.

I have participated in a lot of protests over the past couple of years, but this one spoke to the heart of my activism in a very personal way. Like many people who grew up in Jewish families, I was exposed early and often to Holocaust literature and the concept of saying “Never Again” to genocide. When my mother gave me a copy of Anne Frank’s diary, she pointed out that I was close to 13 years old — the age at which Anne got her first diary as a birthday gift. “If you had been there, this would have been you,” my mother said, referring to Anne’s death at age 15 in the Bergen-Belsen concentration camp. 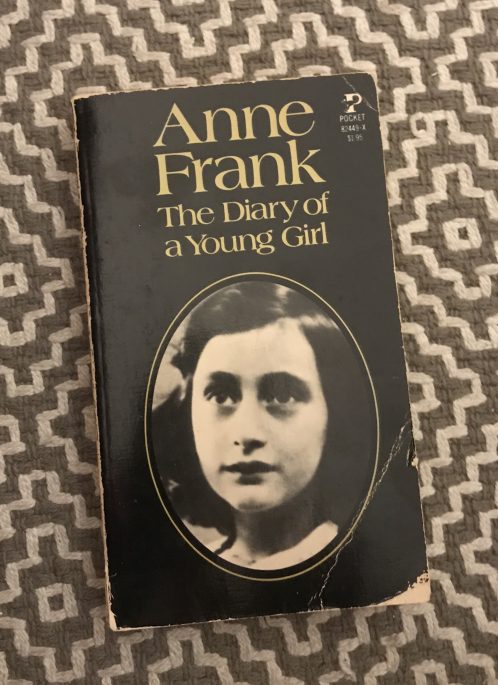 Anne Frank and her older sister Margot both died of typhus, a lice-borne disease — a fact that’s gnawed at me as people (including some Jews) have quibbled over the use of the words “concentration camps” to describe the places where the U.S. is imprisoning immigrants. As I’ve explained before, not all Nazi concentration camps were extermination camps like Auschwitz, with gas chambers for efficient mass murder. Other camps, like Bergen-Belsen, were designed to kill through starvation and diseases caused by poor sanitation and overcrowding. Approximately 50,000 people died from those causes in Bergen-Belsen, with 13,000 people dying after the British liberated the camp because they were too ill to survive. When the British evacuated the camp, they burned it down to the ground to control the typhus contagion. 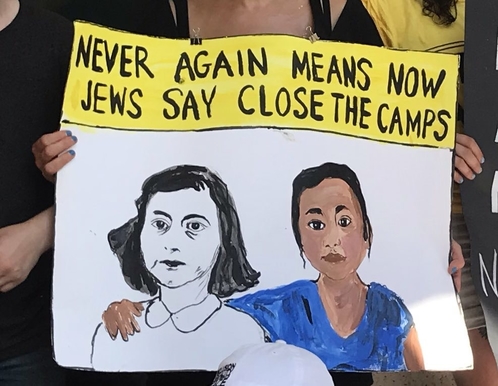 I’ve spent decades mulling over Anne Frank’s story — and all the other stories — wondering what I would do if it happened here. Would I even recognize the moment that democracy slipped away? Would I be like the wealthy Béatrice de Camondo, who was deported from France to Auschwitz because she was “fatally convinced” that she was accepted as a full citizen of the only country she’d ever known? Would I know that it was time to act? Turns out I did. Immediately after the presidential election of 2016, I said to myself, “Never Again is now.”

The reality is that in our own country, in 2019, the overcrowding, squalor, and disease at the camps where people are being detained for an indefinite amount of time — including children separated from their parents — have been witnessed and documented. Six children have died in U.S. custody that we know of. “Sickness and filth everywhere” was what one Border Patrol agent wrote in a journal entry that he shared with ProPublica’s Ginger Thompson. In a story published yesterday, the agent described becoming numb to the “zombie-apocalypse-movie” environment, with individuals blurring together. Among those who stood out were “a teenage mother who’d swaddled her baby in a filthy sweatshirt that she’d borrowed from another detainee because she’d been forced to throw away the clothes she brought.” A California attorney who saw that baby girl wiped rings of black dirt from around her neck.

If we use another term for the camps, does that make any of this more acceptable? Fuck that! Some of us Jews — including 85-year-old Rabbi Arthur Waskow, who spoke at the protest — aren’t going to let anyone use our history to deflect blame from or minimize our country’s abuse of people here and now. While we’re at it, we’re going to call a racist president who is openly inciting physical violence against lawmakers a “racist” and not fucking “racially infused.”

On a follow-up call tonight, Never Again Action organizers pointed out that there are detention centers all over the country, not just at the border. They’ve already done actions in other locations, and they’re encouraging more people to develop local protest plans to make communities aware that they’re closer to the issue than they know. If you’re interested, you can get a toolkit and coaching to help you do this. If you’re thinking about it at all, don’t look, just leap! I was impressed by people on tonight’s call who were brand-new to activism, but took on big roles in D.C. or had created local events, thanks to the superb support from the network. One woman who hadn’t been to a protest before — and hadn’t planned to go yesterday until other plans fell through — not only stuck out the entire action during the 90-plus-degree heat and high humidity, but stayed until night when the people who were arrested were released. She described how a team was there to clap and cheer for the people who had volunteered to put their bodies on the line. It’s a big thing to go face-to-face with the police.

That woman mentioned that the greeting committee for the arrestees had special treats ready; the volunteers had filled out forms ahead of time with requests for favorite foods. That’s how well organized this Never Again movement is! I don’t think I’ve been to an action quite like it. The moment I got to the meeting place, a sign was placed in my hand. There were people distributing water, Gatorade, and snacks to prevent others from fainting from the heat. There were incredibly poised song leaders who kept our energy up for hours on end. People acting as protest marshals dealt with crowd control and the police. A New York-based organizer found me a carpool ride — big thanks to Aaron, a real mensch, who drove me and two other women to D.C. and back in one day! The environment was welcoming to everyone from Orthodox Jews to the completely secular (like me). And most importantly, great care had been taken to make ensure Jewish and immigrant communities prioritized the concerns of the people most affected without co-opting any of their longstanding activism work. As one of the chants went, “Never Again is now! Never Again para nadie! Never Again for anyone!” 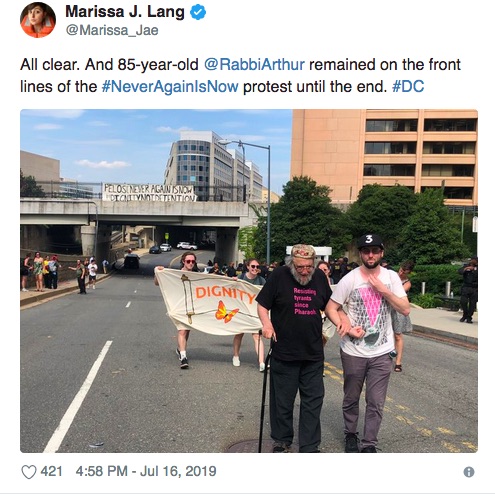 Rabbi Arthur Waskow in his “Resisting Tyrants Since Pharoah” t-shirt.