The Shakira and Jennifer Lopez Super Concert on Sunday was so much more meaningful than I expected! I’m told there was some kind of big sports event before and after their performance, and — if that’s correct — I just hope both sides had fun. More importantly, we had two Latinx women headlining the show for the first time, in Miami, a city with a majority Hispanic population. (They weren’t the first-ever Latinx act though. That breakthrough was claimed by Gloria Estefan in 1992.) 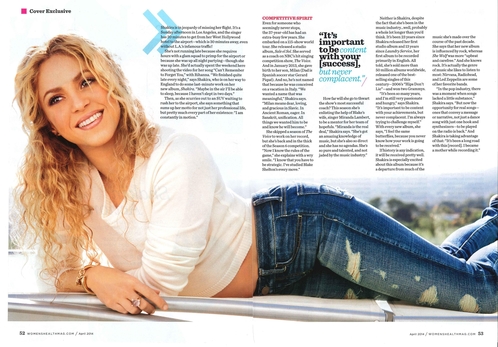 Yo, Shakira wore one of my rings in a 2014 issue of Women’s Health magazine.

I’d actually been a little dubious about putting two stars of that caliber in the same show without making it all about some VH1 Divas-level drama, whether real or imagined. But both Shakira and J. Lo made powerful statements about their different Latinx identities while putting on eye-popping, energetic shows.

Shakira celebrated both her Colombian roots and Lebanese heritage with dance, instrumentation, and vocals. Her choreography included the champeta and mapalé, two Afro-Colombian dance traditions, as well as the belly dancing she’s known for. Two Arab instruments — the mijwiz and the doumbek — were played during her song “Ojos Así.” But her huge moment was her joyous ululation aimed directly at the camera. This was instant meme material for people who had no idea what she was doing, but I know a ululation when I see and hear one! However, that’s as far as my knowledge goes, so I appreciated the people who identified this as a traditional Arab zaghrouta.

Chiming in because I know everyone will be making jokes about this for days — this is a popular Arab tradition, called zaghrouta, used to express joy at celebrations. In the melting pot that is Miami, you could not have picked a better Super Bowl act and this was a lovely touch. https://t.co/q1H9l8UpQ5

The emphasis Shakira placed on that … dang! I was like, “I’m watching an unforgettable moment live! This will be in Super Bowl halftime highlights forever!”

That performance gave J. Lo a lot to live up to. She came out with references to her bravura should-have-been-nominated-for-an-Oscar performance in the movie Hustlers, complete with stripper pole and black leather.

I was definitely expecting references to her Puerto Rican heritage. But Lopez went above and beyond when she went into “Let’s Get Loud,” with the Children’s Voice Chorus singing from what were essentially cages, an apparent reference to the detention of children in concentration camps at our border. And there was absolutely no mistaking the message when Emme, Lopez’s 11-year-old daughter with renowned Latin singer Marc Anthony, sang the chorus of Bruce Springsteen’s “Born in the USA” (which is a protest song, not a celebration of xenophobia) as her mother flipped over a feathered American flag cape custom-made by Versace, revealing the Puerto Rican flag on the other side. Puerto Rico — a territory of the U.S. whose citizens are denied federal representation — was still struggling in the wake of 2017’s destructive Hurricane Maria due in part to a lack of reasonable aid when it was hit by strong earthquakes beginning last month.

With guest appearances by Latin stars J Balvin and Bad Bunny, and mariachi band Los Tigres Del Norte, I’m certain there were more Latinx people on stage than there are playing in the entire National Football League. As the Miami Herald reported, only 16 of 1,696 NFL players are Hispanic.

If you missed the performance, you can see the whole thing here.

Of course, we can’t have any kind of nationwide event without the Dumb Americans among us standing up and identifying themselves. It’s like the “I’m Spartacus” movie scene, but for ignoramuses. There were those who whined that the costumes and choreography of the halftime performance were too sexy for “family entertainment” (family entertainment that consists of a majority black pool of athletes risking brain damage for the pleasure of white billionaire team owners). But here’s what the cheerleaders for the San Francisco 49ers — the losing team, who I hope had fun anyway — wear.

Here are the cheerleaders for the winners, the Kansas City Chiefs.

I see bare skin there. And while racism is one reason for the hypocrisy, we shouldn’t discount good old misogyny. When women are scantily dressed at men’s behest to support and/or entertain men, it’s all good. When a woman dresses herself to be the center of attention and make her own money, suddenly it’s a problem. Fuck that.

Much was made of the performers’ ages too. Shakira turned 43 on Super Bowl Sunday. Lopez is 50. I can’t be too angry at this Golden Girls meme … 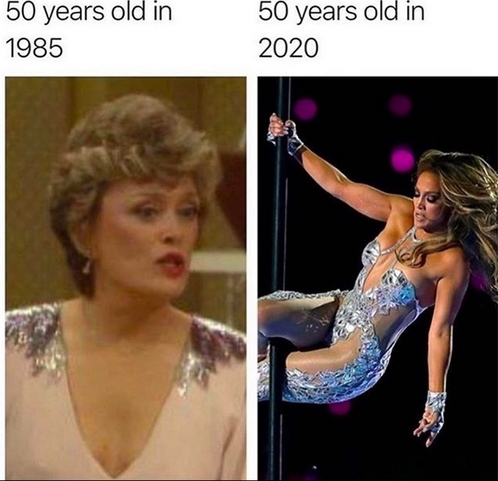 … because when I turned 51, I was thrilled to tell people that I was now the same (correct) age that actress Rue McClanahan was in 1985, when she started playing Blanche Devereaux on The Golden Girls. That said, I wasn’t surprised to be a functioning human being at the advanced age of 51. The joke was that television had a spring chicken of a 51-year-old playing a retiree! Don’t get it backwards.

When it comes to ignoramuses, the Ignoramus in Chief always takes the prize. After much right-wing ado about respectful kneeling during the national anthem to protest police violence, Trump wiggled around like a pre-schooler on a sugar high during Sunday’s anthem. (By the way, complaints about how people behave during the non sequiturial display of musical patriotism date back more than 60 years.) That was just the appetizer. The main course of idiocy was served when Trump initially tweeted his congratulations to the state of Kansas for the Kansas City Chief’s victory. The Chiefs are based in Kansas City, Missouri. Okay. As CNN pointed out, all of us have moments when our brains simply malfunction. The bigger issue is, again, the staggering hypocrisy.

When President Obama said that he has been to “57 States,” very little mention in Fake News Media. Can you imagine if I said that…story of the year! @IngrahamAngle

Even more alarming is the rush to make Trump right when he’s wrong. As George Orwell wrote in 1984, “The past was erased, the erasure was forgotten, the lie became truth. … The Party told you to reject the evidence of your eyes and ears. It was their final, most essential command.”

If only Shakira and Jennifer Lopez could shake their asses and shake some common sense and basic decency into the viewers at the same time … that would be superb.