My enthusiasm for floofy, puffy, and ruffled clothes has been on the upswing for years now, so I don’t know why I forgot to share this gorgeous puffer jacket I saw in November! 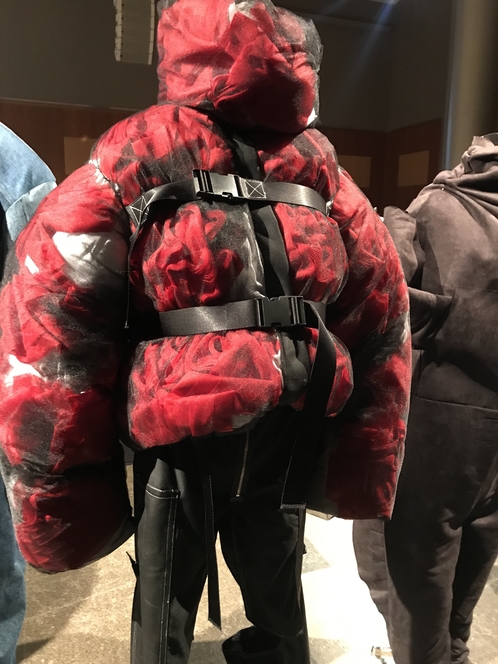 This piece is by Mona Ye, and I saw it at an exhibit of student work at the Fashion Institute of Technology. The students were given Aldous Huxley’s dystopian novel Brave New World as a theme. That was one of my favorite books in high school. I certainly hoped I wouldn’t live to see it come true, yet here we are.  I suppose someone high up at FIT feels the same way.

About her design, Mona wrote:

“Throughout Brave New World, people are being controlled and helplessly confined within their own minds. I wanted to express the feeling of being trapped and the helplessness of trying to escape but with no relief.”

Maybe that’s why I put off sharing this jacket. I create jewelry designs inspired by murdering and murdered women, and even I feel a little grim after reading that description. But it’s not unusual for dark thoughts to be turned into works of great beauty: Look at everything Alexander McQueen ever designed! 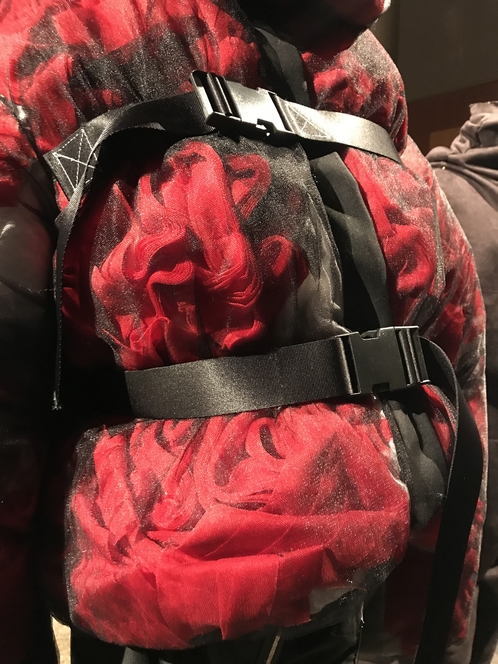 A closer look at Mona’s jacket.

In case you’re not sure what you’re looking at, there’s a transparent outer shell that is containing all the ruffles. 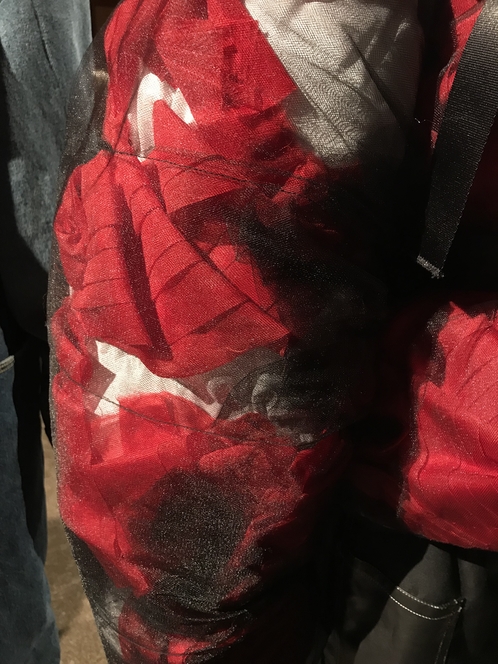 An even closer look.

Another designer who does a lot of work at overseas factories told me that this fabric style is a big trend in the making — everyone is working on it. 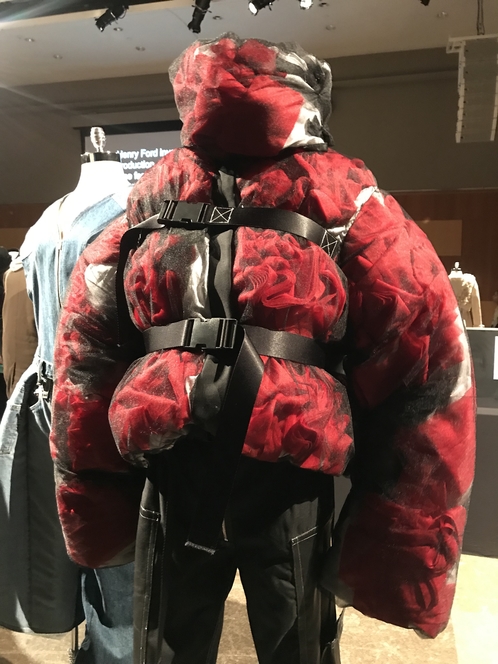 I would have bought this right then if I could have.

Feeling (temporarily) like a wise fashion historian, I told him the technique reminded me of a feather-filled dress Louis Vuitton made in 2010. I got to see a swatch of the actual fabric used. 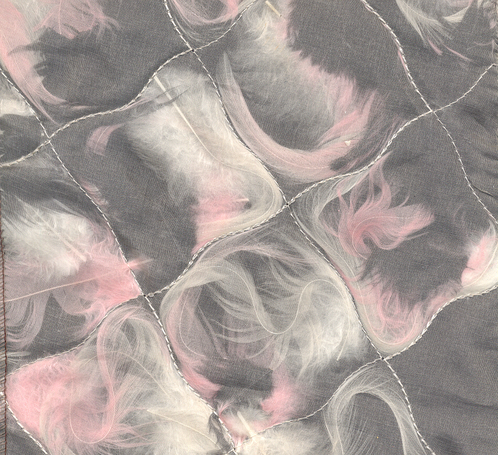 Both Rachel Bilson and Miranda Kerr wore this dress. Bilson wore it to the Costume Institute Ball at the Metropolitan Museum of Modern Art in May 2010.

From afar, a lot of people thought it was a print but I can confirm there were real feathers involved. At the time, I was impressed by what I was sure was a brand-new idea. Lo and behold — a couple of months later, I was at a museum fashion exhibition in Paris and saw Jean-Charles de Castelbajac‘s Autumn/Winter 1973/1974 quilted down jacket with a transparent outer shell and red, yellow, purple, green, blue, white and black feathers. I could only get this one terrible photo of the jacket before I was scolded by a guard. 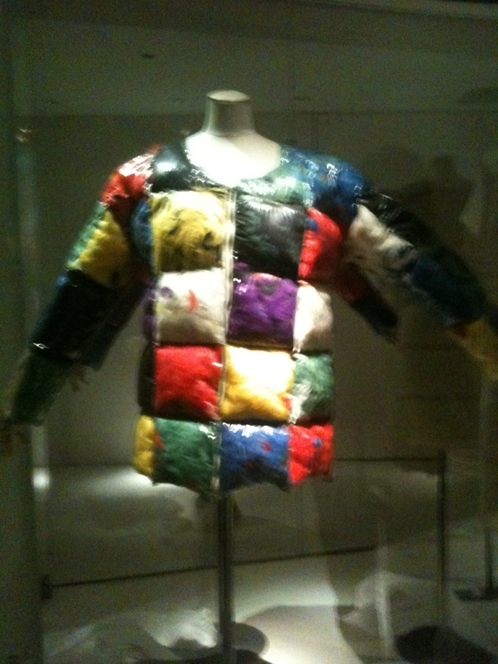 I am always the person caught by a guard even though I would never expose art to a flash! Maybe I looked extra suspicious because I was visiting the museum for a second time just to take the jacket’s photo. After I first saw it, I knew I had to post about it and link it to Vuitton, so I scoured every postcard and catalog in the museum gift shop for an image. That particular design didn’t get any gift-shop love! I went back to the hotel and brooded about it; decided I had to have a picture; and went back the next day, paying for entrance all over again. So really, I was a very good museum customer. Sacre bleu! The guy could’ve given me a break.

Despite my encounter with the long arm of the museum law, the mere thought of the feather concept or Mona Ye’s fabric version brings me immense joy. You know how people misunderstand song lyrics and, after decades, learn the real words and feel like their whole life was a lie? Thanks to the feathered Castelbajac and Vuitton pieces, MrB told me something I didn’t know about Alice Through the Looking Glass, and I was so shocked that I laughed till I cried and ultimately had to lie down on the floor. I was rolling on the floor laughing (literally) my ass off (figuratively). I’m laughing right now typing this. Oh, Mona Ye, I must have your puffy, ruffled jacket so I can laugh all the time!

CLICK FOR THE ALICE THROUGH THE LOOKING GLASS DISCOVERY.
You might also like
What Wendy Wore: International Press Freedom Awards '18
My Best Dressed at the 2018 Oscars Is ...
My Oscar Gown Archives, Part II
Previous Post: « Wednesday’s Video: How to Get Free Jewelry
Next Post: The Week in Review »