September’s Jewel of the Month is a sex-ay mixed pair of silver stud earrings. Say hello to my little friends — the emoji peach and eggplant! 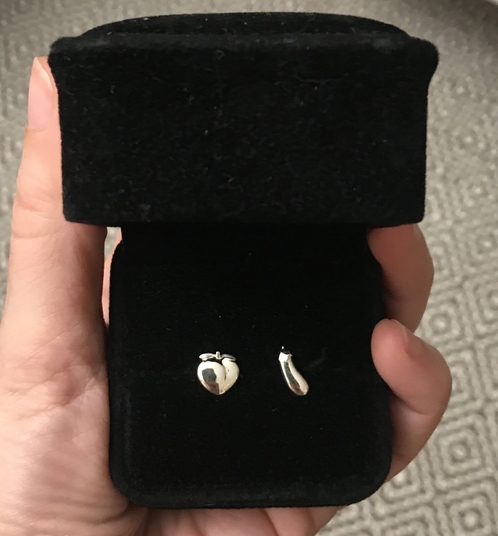 If you’re fluent in emoji, you know what this combo means. Even if you’re not fluent in emoji and think to yourself, “If I had a dirty mind, what would I make of these emoji?” you’ll figure it out. 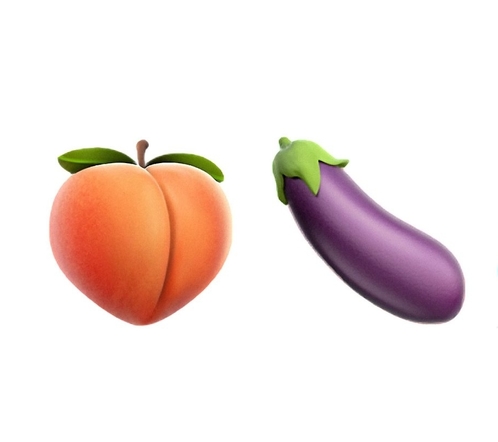 The actual emojis in all their sex-ay glory.

If you’re still stumped by the question — and I’m looking at you, MrB — this link will explain it all.

Anyway, the peach and eggplant pair is an extra-special Jewel of the Month not just because it is super-cute and funny, but also because it is the last new design that I am making in silver for my own line. 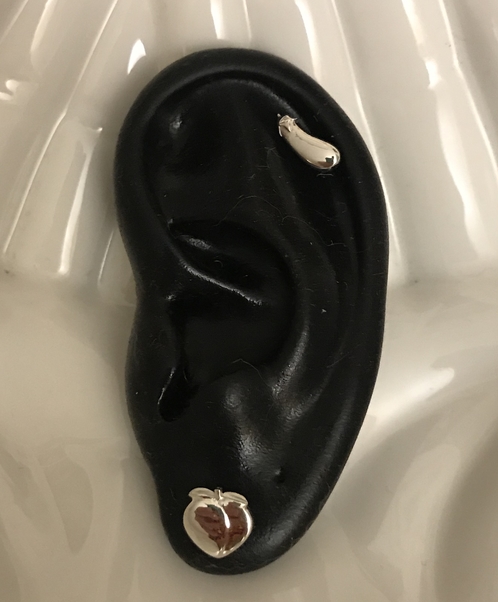 Here’s how these studs look on my weird rubber ear display.

I’ve mentioned my plan to focus on my gold and platinum work recently, but I haven’t written about the reason for the decision. First, I want to say that I’ve had a great time working in silver. It inspired me to do different kinds of designs than I did in gold — fun, pop-culture-related pieces that were streamlined enough to be turned around in a flash when I was inspired by the news. I had a NASTY necklace in silver available days after Trump referred to Hillary Clinton as a “nasty woman” in the final presidential debate of 2016. More expensive gold pieces don’t come together that fast, trust me! And, of course, I loved having a line that was accessible to more people budget-wise than the intricate 18K gold work could ever be, because the more people enjoying Wendy Brandes jewelry, the merrier! I talked more about the inspiration for the silver collection in a video this spring.

However, the line was entirely about having fun and making customers happy because it sure wasn’t a money maker. It wasn’t literally a loss leader, but it was pretty damn close. If you’ve followed me for a long time, you might be familiar with my “Get Smart” series of business-related posts that deal with, among other things, economy of scale. The lower the price of an item is for the consumer, the more the manufacturer needs to make of that item in order to make it worthwhile. For instance, I’ve done my middle finger emoji stud in silver and 18K yellow gold. The design is identical and the labor is about the same (there are some slight differences in the amount of time put into working in different metals, but it’s not significant here). For the exact same amount of work, I can charge $35 for silver, or $225 for 18K gold. Which do I want to make more of? Take a guess! 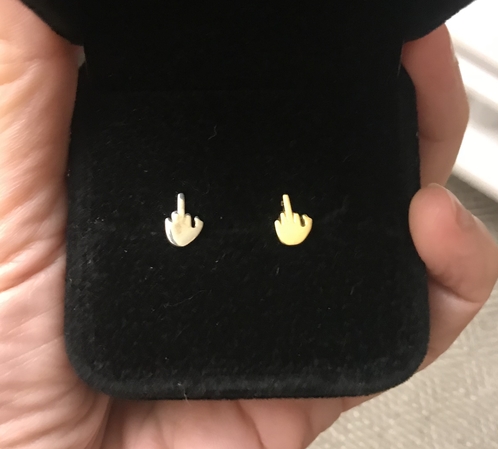 Silver on the left. Gold on the right. Same amount of work. Only one is financially worth it.

It would have made the most financial sense to sell the silver designs in quantity, wholesale, which is something I tried and failed to do with Shady Records. Despite that, I was okay with continuing to sell silver to individual customers for the reasons I stated above. At the same time, I always wondered when my favorite New York manufacturer for silver was going to have enough of me. This company mostly works in gold, platinum, and diamonds, but way back in 2006, the owner volunteered to do some silver work for me and he’s been doing it ever since! He’s the guy who has been willing to make one word necklace at a time, and — while I often ordered 10 emoji studs at once — he’d even do a single silver stud for me. That’s pretty crazy, to be honest. He had to do a sketch, a wax model, a mold, cast the metal, polish it up … all to make maybe $10. Overseas, where a manufacturer might make $2 per unit due to lower labor costs, a factory wouldn’t even start the manufacturing process without a guarantee of a hundred units per style, with at least five styles being ordered at once, meaning my minimum order would be 500 units IF the overseas factory owner was feeling generous.

I’d been thinking more frequently about this in the past few months — probably because I turned down several requests for more elaborate custom jobs in silver. Committing to weeks of one-of-a-kind work only to make $500 just isn’t reasonable when the goldsmiths who do my more intricate work are overwhelmed with jobs from other clients who are designing and creating pieces that sell for $500,000 and up. Therefore, when my emoji-making man gently broke it to me a few weeks ago that he was moving out of silver, I took it much better than he expected. He said I was the only one he was worried about telling because we’d worked in silver together for so long. But, he said, he had realized that the machinery and the labor for silver manufacturing was costing him about $20,000 a year … and he was making $10,000 a year on it. I said, “I can’t believe you put up with it this long, to be honest! Thanks!”

I did feel a little sad walking out of that meeting, like, “Wow, it’s really the end of an era.” I briefly contemplated getting in touch with some of my other manufacturing contacts to see how small a run of silver they’d be willing to do. Then I realized it was time to move on, especially because I’m not even saying “farewell” to the emoji collection and word necklaces. I’ll still happily do the existing designs in gold and platinum upon request. I just don’t anticipate adding lots of new designs unless it’s a quantity order for a jewelry store or merch for a corporate entity (that isn’t named Shady Records).

This means that I’ll be selling off the existing silver pieces in my collection (and reorganizing my very recently reorganized website again, once all of that is gone). If there is any silver jewelry that you love get it now, because I am never making it again.

See something you want? Holla at me for a special price at info at wendybrandes dot com. If you’re a middle finger emoji fan, hop on those styles immediately because I think I only have five earrings left, and a couple of necklaces and rings. And, of course, the peach and eggplant pair is a one-of-a-kind. Here’s a video to put you in a shopping mood.

To quote the Lone Ranger, “Hi-Yo Silver! Away!”