I’ve been challenged by a particular Zac Posen skirt for 13 years. The vibrant pattern from Posen’s Spring 2005 collection caught my eye as I was transitioning from my corporate job at Lehman Brothers to running my own jewelry business. Posen used it in dresses …

I remember getting the skirt thinking that it would be part of a “new uniform” for my new career. I’d be nicely put together but not banker-like. It took exactly one summer day with a high in the 90s — during which I schlepped between manufacturers and gem dealers in New York’s Diamond District while wearing the Posen skirt, heels, and a black top that I felt doubtful about — to make me decide dressing presentably for such occasions was overrated. Now if I ever visit my favorite goldsmith in anything but denim and an old t-shirt, he wants to know if I’m going somewhere fancy.

I’ve continued feeling doubtful about the tops I’ve worn with this skirt ever since that summer day. I had the same problem with a vintage Stephen Sprouse skirt. In both cases, it looks like you should be able to throw on any black top and be done with it, but the weight and thickness of the skirts’ fabric that demands not just color coordination but also some kind of textural match. My designing friend Stacy Lomman eventually found a solution for my Sprouse skirt. 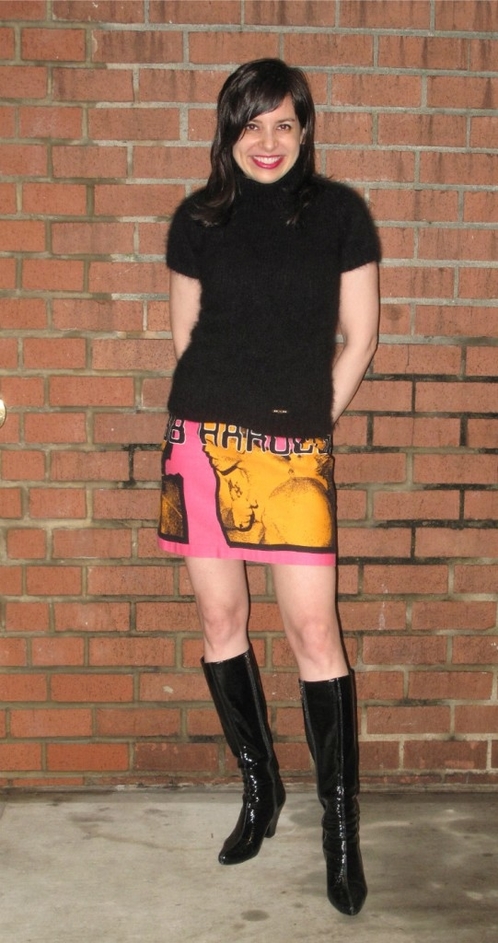 Recently, Stacy rummaged through my closet and found a tank top made of slightly heavier-than-usual fabric with ruching that’s been the best match so far with the spongy fabric of the skirt. Neither of us were crazy about the curved hem of the top but if you arrange it right, it works. Of course, I forgot to arrange the top when I wore this outfit to a family dinner last week, so I didn’t get the best photo. I swear it looked nicer in real life, but trust me when I tell you that even this is a vast improvement over all previous attempts. 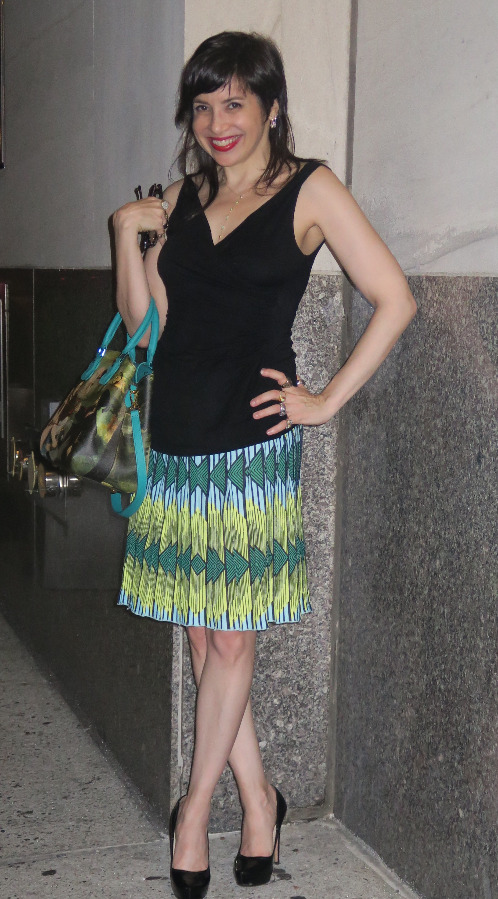 I’ve come close to getting rid of this skirt so many times. In addition to the difficulties in getting the top right, it doesn’t have a proper waistband and I like something that feels more structured. At the last minute, I always rescue it from the “to go” pile out of stubbornness. I’m glad I did because I believe the situation is finally improving. Maybe by the skirt’s 14th anniversary, I’ll have found the perfect top. It’s always good to have ambitions!

You might also like
What Wendy Wore: Gareth Pugh for Our Anniversary
Spacenook and Versace
What Wendy Wore: Vintage to Vanity Fair
Previous Post: « My Best Dressed at the 2018 Emmys Is …
Next Post: Jewel of the Month: Sexy Emojis Say Sayonara to Silver »