The stunning Brittany Siminitz of JCK included me in yesterday’s roundup of jewelry peeps at Coachella, saying that I gave her a “front row seat to the festival” on Instagram. Thanks, Brittany!

CLICK HERE FOR JEWELRY PEOPLE AT COACHELLA VIA JCK.

Her article has given me the incentive I needed to get to this post on the actual concert experience of Coachella, seeing as last week I wrote about what I wore but not the more important aspect of the festival. It was tedious work organizing my photos, even though I didn’t take as many as usual. One act that I didn’t photograph was the first night’s headliner, Radiohead. I’d seen Radiohead last year and they’re pretty challenging to photograph with all the moody onstage lighting. If I hadn’t already seen the band — or if I were its No. 1 fan — I would have been disappointed by the terrible sound-system problems that night. I didn’t stress about it though, because I was saving myself emotionally for surviving a long wait in the front row for Future and Lady Gaga the next day.

On Saturday, I was there by 3 p.m., mostly for Gaga, who was scheduled to come on after 11 p.m. I’ve waited for a performer longer than that, so I thought, “No problem,” despite the above 90° temperature. (Recently discovered bonus effect of long waits for concerts: I’m unflagging at protest marches.) There were Gaga diehards already there ahead of me, one of whom sweetly pulled me from the second row to the first row alongside him.  It was good to have the company of Erik and his Gaga-loving friends during rapper Future’s set. I’d been excited to see Future, but that was the craziest crowd I’ve ever been in. The Gaga fans in the front row held onto each other for dear life while we got smashed against the barricade. Meanwhile, a 14-year-old girl kicked my foot and pinched my arm as she attempted to force herself into the centimeter of space to my left.  Honestly, I could barely pay attention to Future’s performance. I absorbed his big hit “Mask Off” for a minute or two before I had to go back to fending off audience members whose parents are most likely younger than I am.

The only reason I was able to take photos was because I was forced, for some hours, to stand with my arms over the barricade, and my camera was in my hands. I didn’t have room to pull my arms back behind the fence or put my camera away, so I took pictures. You can see I’m telling the truth, because Erik’s sister found us in the livestream for Gaga’s performance. 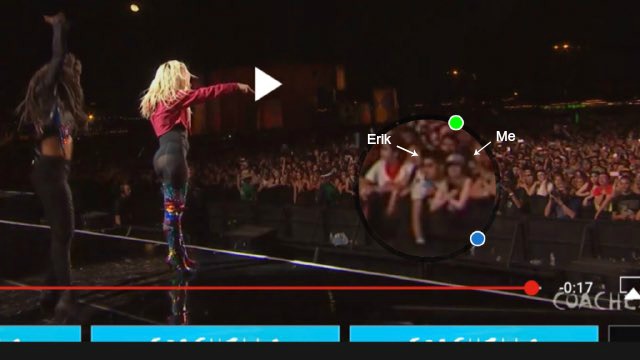 Screenshot. There we are!

Anyway, here’s Future performing something that I didn’t get to appreciate. 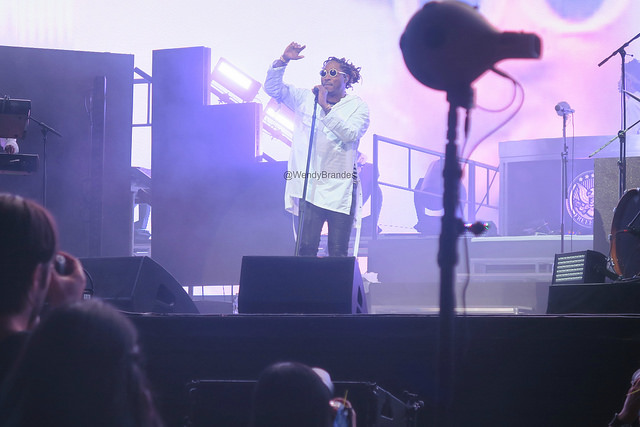 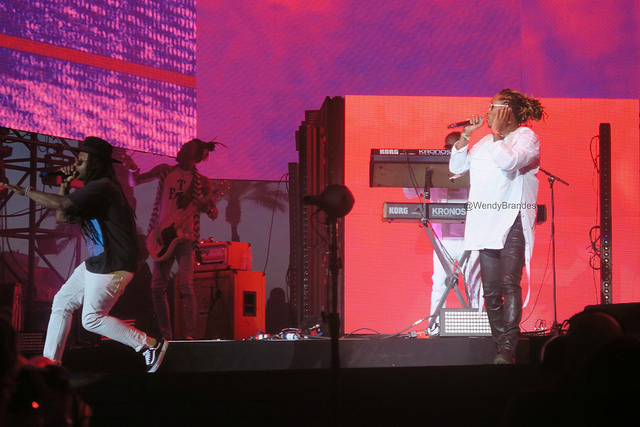 … and Drake. When Drake came out, the pressure from the crowd grew so intense that I wondered if any of my internal organs were being liquefied and, if so, whether those were important organs or ones that I could live without. 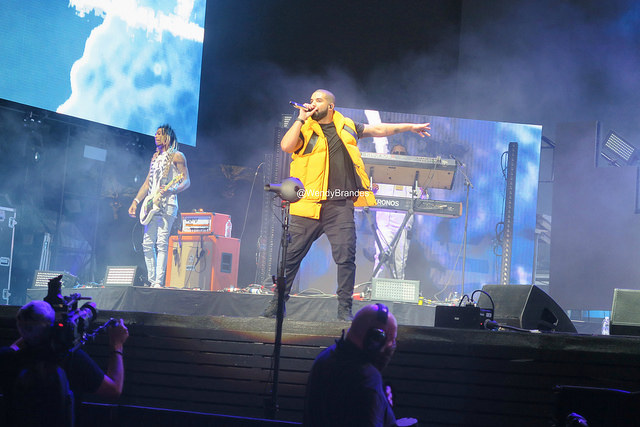 After Future, Erik and I checked ourselves for damage and celebrated our survival. 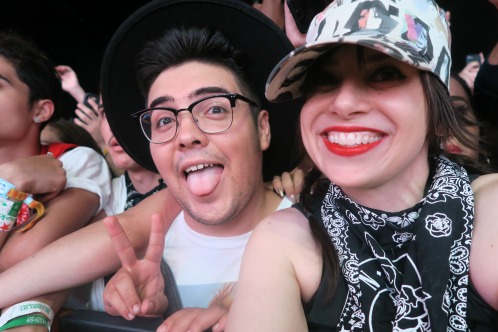 Seriously, not everyone made it through Future’s set. People were fainting right and left and being dragged away by burly security guys.  That’s one of my big fears: becoming a music-festival fainter. There’s always someone near the front who is going to pass out or come close to passing out because of dehydration, heat, drugs, or alcohol, but I felt like this performance set a record.

The crowd chilled out a bit during the next performance, which was Bon Iver … 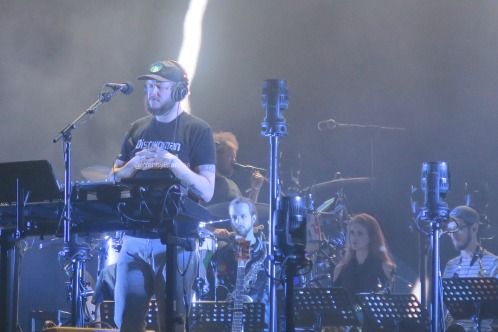 … and then went wild again for Gaga. Not scary-wild, though, so I was able to enjoy the show. 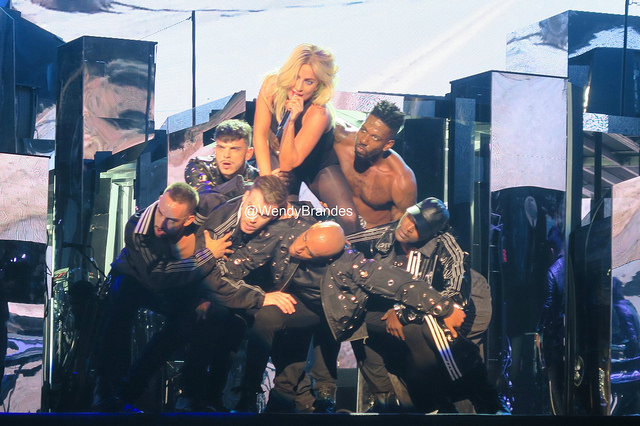 This was my sixth time seeing Gaga, and I’m seeing her again this August in New York. I find her endlessly entertaining. 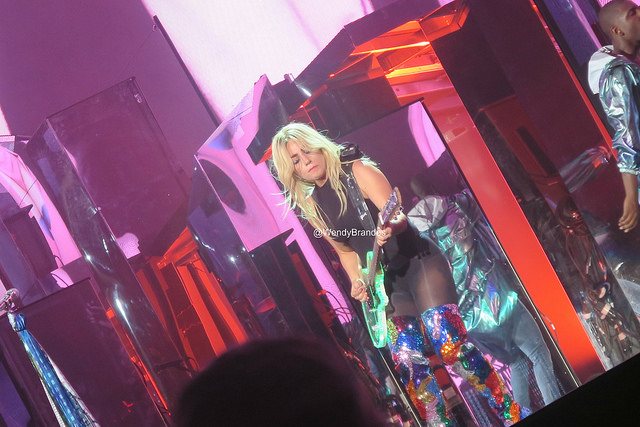 Check out those boots.

In between Bon Iver and Gaga, I swore to both to Erik (on my right) and second-grade science teacher Lindsey from Ft. Worth, Texas (who, after Future, replaced the vicious 14-year-old on my left) that I would not repeat the long wait the following day for Lorde and Kendrick. After this crazy night, I said, I could live without the front row.

Well, I didn’t totally lie, because I settled for the second row the next day.  Once you’ve seen musicians up close, it’s difficult to commit to seeing them from a distance.

I’d last seen a full show by Lorde in 2014, and I thought she was much more comfortable this time around …

… even though she said she was “boiling in her own nerves” over the fact that she wasn’t sure she was going to be able to get the whole act into the allotted time (she did). I’m not sure if she was running late in general, or specifically because this stagehand couldn’t get the curtain off her set for quite a few minutes. This turned into a two-man job! 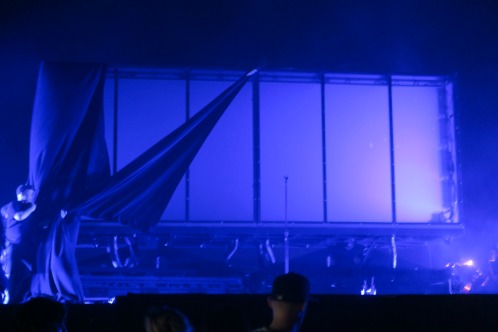 People danced and posed in this box during Lorde’s set, including Lorde. Click to see all my Lorde photos on Flickr.

Kendrick Lamar was the festival finale, performing tracks from his just-released, No. 1 album, DAMN. 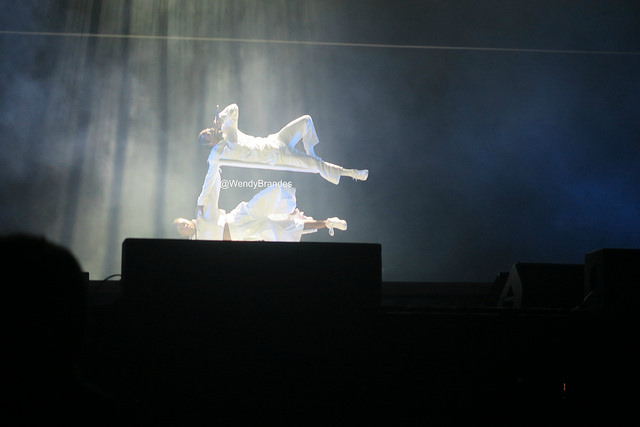 Kendrick has announced a tour for the album, and if you haven’t seen him yet, I recommend checking him out. 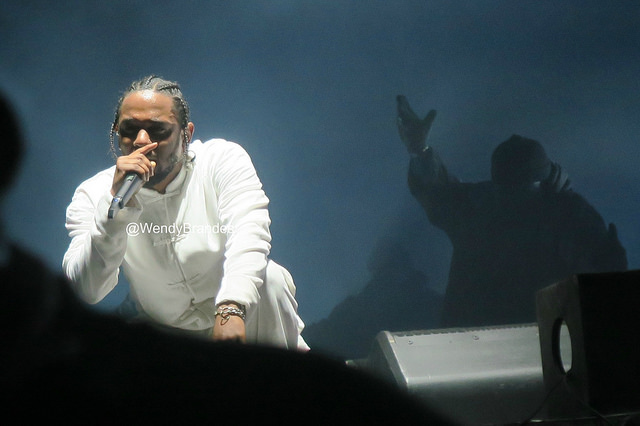 Other acts I enjoyed were Local Natives, the Head and the Heart, Two Door Cinema Club, Lee Fields & the Expressions, Mitski, Toots and the Maytals, and Grouplove —  and nearly all of those were at the stage where I was standing vigil. There are a lot of others I would have liked to see if I could have hit the other Coachella stages, including BANKS, New Order, Kehlani, and Kiiara, but I prefer seeing fewer festival acts in a meaningful way to running myself ragged. Hey, at my age, it’s a miracle that I managed what I did! Consider what else I could be doing, which was, indeed, something I mused upon while at Coachella.

I’d rather much rather be me than Neil Gorsuch.

You might also like
Getting Bitchy at Shade 45 With Gangsta Boo
Throwback Thursday: Neil Young (and Me) in 1989
Musical Interlude: Eminem at G-Shock 30th Anniversary Party
Previous Post: « The Week in Review
Next Post: Throwback Thursday: Save Allan & Suzi! »