It’s World AIDS Day, and I’m a little disappointed that I didn’t get to mark the occasion by getting tested with Rihanna and Prince Harry.  But, even though I didn’t get to have my blood drawn with the beautiful people, I’m happy that the event illustrates how attitudes about AIDS have changed since 1987 when Harry’s mother, Princess Diana, scandalized the public by shaking hands with AIDS patients — without wearing gloves.

I’ve been thinking about how things were back in the day — before people knew how AIDS was transmitted and long before there were effective drug treatments — for weeks. First, there was the poor reporting about “Patient Zero” in October. Then, in November, I read New York Magazine’s excerpt from David France’s book, How to Survive a Plague. Truly heart-breaking, but you must read it to understand how devastating the disease was and how hard activists had to fight to get the treatments that eventually changed AIDS from a quick death sentence to a chronic, controllable disease.

Finally, you should check out my friend Maggie Kneip’s memoir, Now Everyone Will Know, which was published in time for last year’s World AIDS Day. 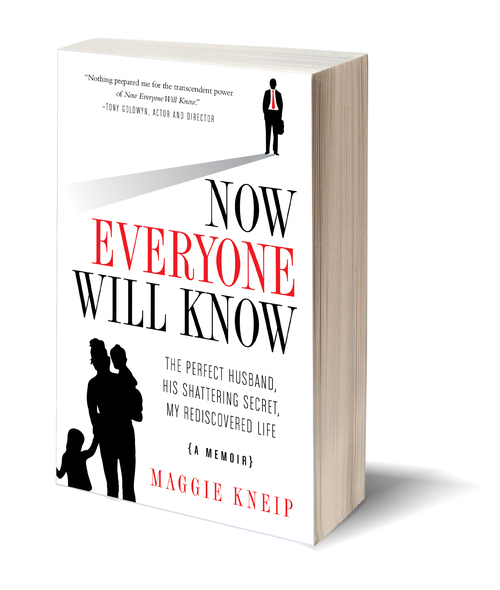 I know Maggie because her late husband, John Andrew, was an editor for the Wall Street Journal during the time MrB was there. John and Maggie had one young child and another on the way when John was diagnosed with AIDS in the early 1990s. Not only did Maggie have to deal with the trauma of John’s illness and death while caring for two young children (fortunately, she and the children weren’t infected), but she had to cope with the fact that he’d been living a double life that included unprotected sex with men. Because of the stigma of the disease, she kept the facts of John’s death as quiet as possible for decades. But now she’s speaking out and telling her story.

I interviewed Maggie about her book a full year ago and — I’m sad to say — never got to do the story I planned, so I was pleased to see her written about in the Huffington Post in October. I’m also happy that the book is #4 on the list of Amazon Kindle Motherhood Books. Now that I think of it, I’m going to listen again to the recording of my interview with Maggie and if it goes beyond the Huffington Post story, I’ll write something up. Better late than never, right?