Can’t take the heat? Then you should have tuned into Hallmark Channel’s “Christmas in July” programming earlier this month. Why wait till December to “Catch your favorite holiday Hallmark Channel Original movies!” when you can enjoy them in the summer, right?*

I’m feeling a little like Hallmark right now because this is an “August in July” Jewel of the Month post. I can’t wait four more days to tell you the full story of the new double-finger ring design that I recently debuted on Instagram. POW! Here it is. 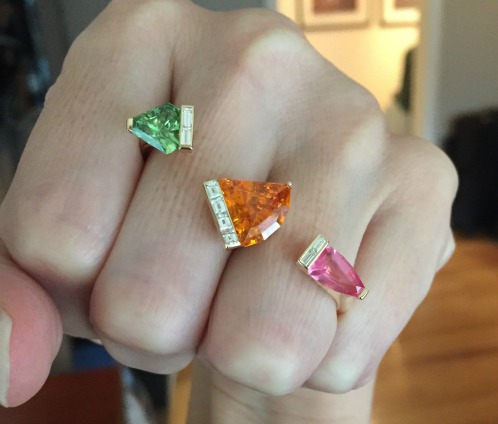 From the left, the gems are green grossular garnet, orange spessartite garnet, and pink Mahenge spinel, all ethically sourced by ANZA Gems.  Each gem is accented by diamond baguettes. It looks like the gems are floating above the fingers, doesn’t it? A lot of gold was used to create that effect. You can see the metal in this side view. 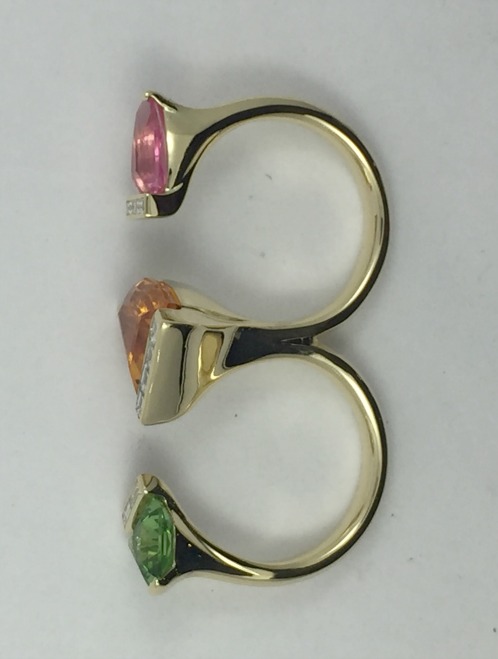 And here’s a look from above when the ring isn’t being worn. 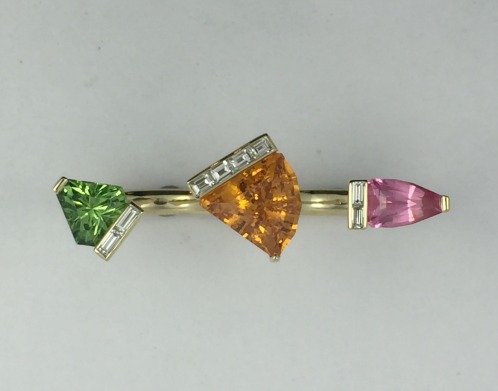 That’s a lot of gold.

This was my recent entry for the American Gem Trade Association’s Spectrum Awards for colored gemstones. (Last year, I accepted a Spectrum honorable mention for my Pink Elephant and Tipsy Writer Maneater ring.) The Spectrum winners were announced on Monday and I was sad that I didn’t place. That same evening, I missed out at the Womens Jewelry Association Awards of Excellence. I was feeling a little sorry for myself, to be honest! Then I perked up because the WJA Awards gala was attended by a lot of people who had seen all the Spectrum entries, and a number of them told me they’d loved the ring. In fact, two of my favorite jewelry experts wrote about the ring this week, which is why I’m doing this post a little early.

“A two-finger ring with a trio of candy-colored gemstones from Wendy Brandes served as a sharp departure from her usual tongue-in-cheek adaptations of powerful characters like man-eaters. While I heard some say the color combination was an acquired taste, I found that trinity of cool tropical-color cuts—two were diamond shapes—to be positively fabulous! In fact, I would have made this Most Fashion Forward.”

Jennifer is right. This is a sharp departure from my usual designs! That’s because it wasn’t created for my signature collection; it’s my second design for ANZA Gems. I wrote about my first ANZA design — a ruby dangle ring — two weeks ago. As I explained then, Monica Stephenson, who writes the jewelry blog iDazzle, founded ANZA Gems in 2014. Through ANZA, Monica personally sources ethically mined, colored-gemstone rough from Tanzania and Kenya; brings the uncut stones back to the U.S. to be faceted by gem cutters here; and then has them incorporated into fine jewelry by designers with whom she collaborates.  At least 10% of the proceeds from every sale goes back to three East African schools that Monica supports.

I picked out these gems at the same lunch meeting with Monica during which I got the little ruby. A few months ago, I had tweeted that I had a dream about working with mandarin garnets (aka spessartite or orange garnets). Monica noticed this and said, “I have a gem for you!” She promised to show it to me during her next trip to New York, and that’s exactly what she did. However, as she extolled the virtues of the orange garnet, I kept getting distracted by the other two gorgeous gems that were in the same box as the garnet. 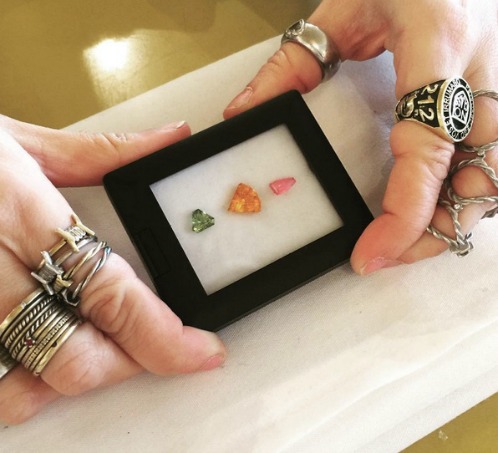 This is me holding the box of gems about 13 weeks ago.

“This pink spinel is beautiful,” I said. Monica was like, “Yeah, EVERYONE wants that one. Look at the spessartite!” “The green garnet is electrifying!” I exclaimed. Monica tried to get me to focus, but I couldn’t get over how fabulous the combination of bright pink, orange, and green looked.  The more I looked at them, the more certain I was that the three gems had to stay together. Maybe the color combo is an acquired taste — as some of the Spectrum folks thought — but it’s one that I acquired quickly. Pink and orange together already is a popular pairing in fashion and interior design, and I thought the green kept the other two from looking too Barbie-doll sweet. On the spot, I suggested a double-finger ring. Monica was initially hesitant because these were her three most spectacular gems, so using them in one piece was the jewelry equivalent of putting all her eggs in one basket.  But, somehow, I convinced her to turn over all three.

When I took the gems to my goldsmith, I told them they were arranged perfectly and to leave them just as they were, in the order that they were in. Monica had put them together so well … why mess with that? It amused me to imagine how surprised Monica would be when she realized that she helped create the design when she organized the gems in their boxes. I knew the look of the piece would surprise her too. As Jennifer pointed out, this isn’t my usual style. THIS is my usual style: 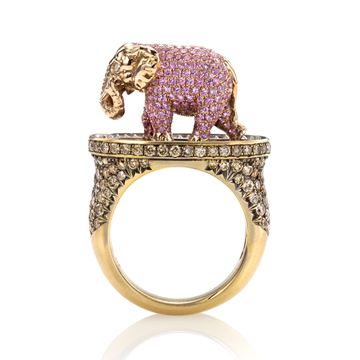 There are several reasons for that. First, the rich colors of the gems combined with the expert cutting done by Peter Torraca turned these stones into works of art.  I didn’t want to distract from that with pavé or even a precious metal. Also making a case for keeping the focus 100% on the gems: The story of Monica and ANZA Gems. These two garnets and one spinel symbolize Monica’s effort to make a positive difference in the world. That deserves to be celebrated in a unique way.

In addition, I reviewed the designer collaborations Monica had already done, such as this garnet pendant by Rebecca Overmann. 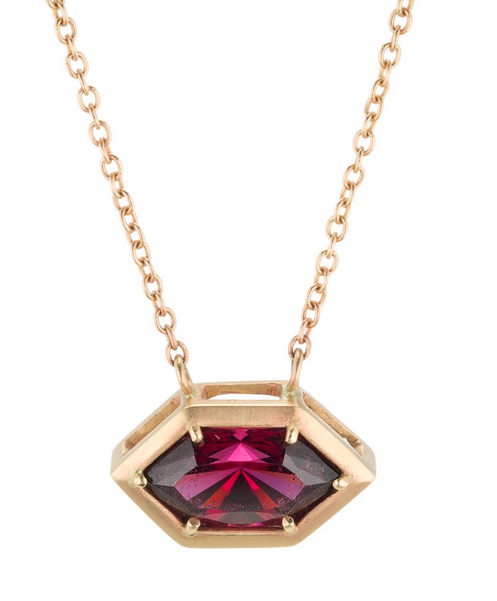 Overall, the looks were clean and streamlined. I wanted to stick to that style — or a variation of it — rather than indulge my love for insane intricacy. ANZA deserves its own identity. Finally, there was the question of cost! The expert setting of the 400+ one-millimeter stones necessary for a Maneater design can cost $4,000 for labor alone in New York City! (Overseas, the cost would be a fraction of that, but it would be absurd to do a one-of-a-kind piece outside of the U.S. unless I were there to supervise the process … and that means travel expenses.) That work would be a large percentage of the retail price of the finished design, which didn’t seem right to me. The raison d’etre for an ANZA design is the ANZA-provided gem, so why pour money into accent stones that have nothing to do with ANZA? The diamond baguettes I chose instead give the ANZA gems a little sparkle, but they’re complementing the center stones, not competing with them.

Finally, I was fated to create a ring like this. No, really! I’ve said many times — in interviews and on this blog — that my jewelry designs are inspired by the stories of extraordinary women, not by big, beautiful gems. I usually figure out the story I want to tell, then create the design to tell it. Often I have to have gems custom-cut to fit the piece. But, as I always say, “Never Is the Next New Thing™” and I’m not an exception to the rule. This spring, during an interview, after I reiterated my explanation of my typical inspiration, I thought, “The more I say this, and the more sure of it I sound, the more likely it is that I will do a piece inspired by big, beautiful gems. Never is the next new thing!” Cue Monica and her big, beautiful gems! On the other hand, I wouldn’t have been looking at these gems in the first place if they weren’t brought to me by an extraordinary woman with a compelling story. I figure I’m having it both ways here. 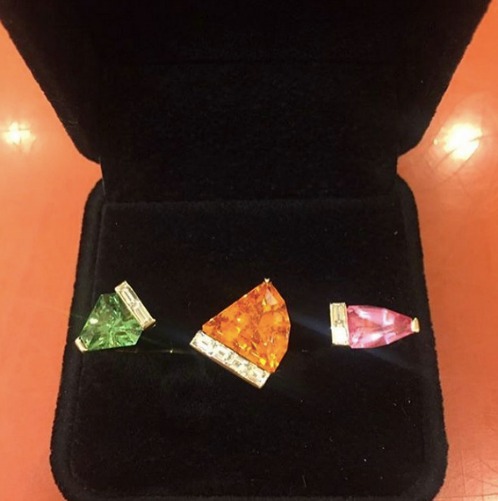 Looks good against black, doesn’t it?

Here are the ring’s specs.

*I like to watch Golden Girls and Frasier reruns on the Hallmark Channel. That’s how I know this.

**The receipt for the diamond baguettes reads, “The diamonds being herein invoiced have been purchased from legitimate sources not involved in funding conflict and in compliance with UN resolutions. The seller hereby guarantees that the diamonds are conflict free based on personal knowledge and/or written guarantees provided by the supplier of these diamonds.”

You might also like
Jewel of the Month: Marie Antoinette Earrings
Year of the Dragon Jewelry
Wednesday's Video: Get Your Skull Jewelry Now!
Previous Post: « What Wendy Wore: WJA Awards of Excellence
Next Post: Madeleine Albright’s New Hillary Brooch? »