I’ve always meant to write about Madeleine Albright’s Read My Pins book. Albright — the first woman to serve as U.S. Secretary of State (from 1997 to 2001) — is known for cleverly matching her large collection of brooches to important occasions. 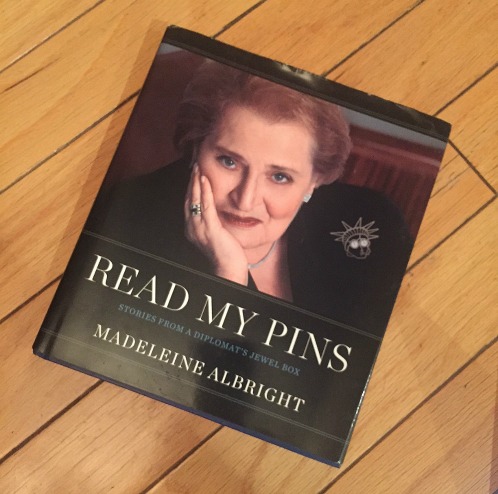 This is my copy. Click to buy your own.

The book explains that it all started in 1994, after Albright, then the U.S. ambassador to the U.N., criticized Saddam Hussein. The government-controlled Iraqi press responded with a poem about Albright that called her an “unparalleled serpent.” Soon after, she had to meet with Iraqi officials and, as she contemplated what to wear, Albright recalled a snake pin that she had purchased years earlier. She wore it, but she didn’t expect anyone to make the connection.

“However, upon leaving the meeting, I encountered a member of the UN press corps who was familiar with the poem; she asked why I had chosen to wear that particular pin. As the television cameras zoomed in on the brooch, I smiled and said that it was just my way of sending a message.”

After that, she was off and running!

The book includes a 1996 photo of Albright talking to then-First Lady Hillary Clinton in a ladies’ room. Albright says, “I was proud to be the first woman to serve as secretary of state and delighted when Secretary Clinton became one of my successors.” 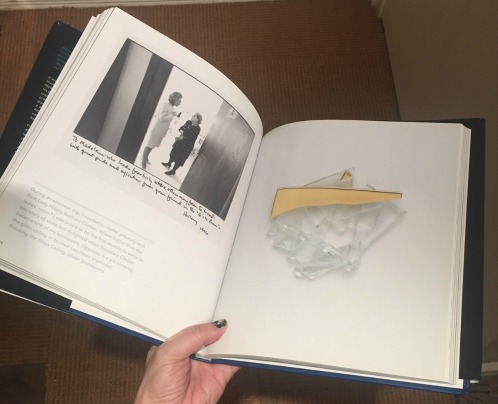 The photo with Clinton is on the left page

Naturally, that photo and text is paired with the image of a pin created by Vivian Shimoyama, “showing the glass ceiling in its ideal condition: shattered.”

I was excited to see the glass-ceiling brooch again on Thursday, the last night of the Democratic convention, when Hillary Clinton became the first woman in history to become a major party nominee for president.

But after I looked more closely, I realized this pin is different from the one in the book. Does Madeline Albright have two shattered-glass-ceiling pins? Does she have more? Will she have a new one for Clinton’s inauguration? Would she mind giving one of her old ones to me? Inquiring minds want to know!

Speaking of fashion statements, I liked Clinton wore a white pantsuit to accept her nomination. That color was associated with suffragettes. (In 1984, Democrat Geraldine Ferraro also wore all white when she accepted her nomination as the first female vice-president.)

While I’m speaking of glass-ceiling breakers, I want to give some love to the late Shirley Chisholm, who became the first woman to run for the Democratic Party’s presidential nomination in 1972. She was also the first African-American woman elected to Congress. Chisholm didn’t wear all-white when she announced her run …

… but the bold graphic print she wore was very striking.

You might also like
Wednesday's Video: Wendy Brandes Silver
Pearls in the Pool: For Olympians Only
Jewels of the Month: Time to Give Women a Hand
Previous Post: « Jewel of the Month: Double-Finger Ring for ANZA Gems
Next Post: The Week in Review »