I didn’t expect the last night’s red carpet at the Metropolitan Museum of Art’s Costume Institute gala to be an emotional roller coaster, but it was! And that made it a challenge to determine the most worthy recipient of my coveted Best Dressed/Wear What You Want combo award.

The exhibit, “Manus X Machina: Fashion in an Age of Technology,” was a good excuse to dress like a silvery robot, which is a look I normally like a lot. 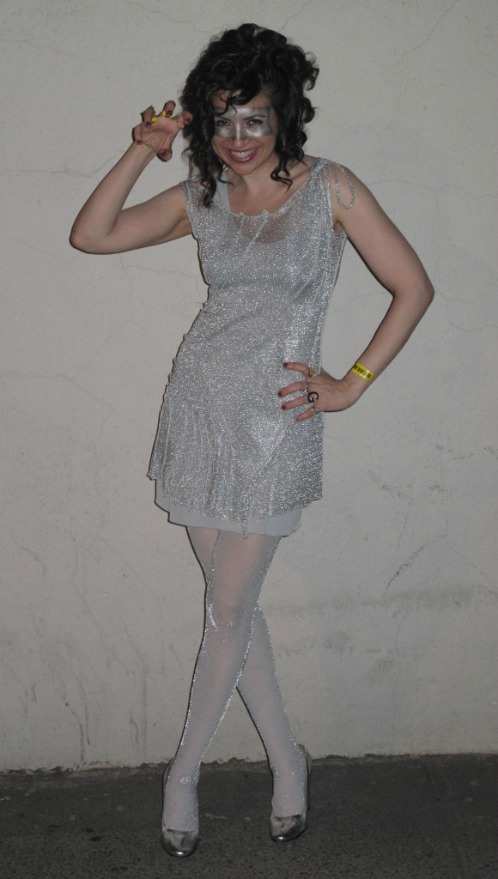 But so many attendees were inspired to go with that style that no individual stood out to me. Who knew that robot-style could get old? Sigh.

Then Karolina Kurkova’s light-up Marchesa dress and Claire Danes’s light-up Zac Posen dress seemed to save the day. Marchesa’s designers worked with IBM’s supercomputer, Watson, to create a very Marchesa-looking dress embedded with LEDs that changed color depending on the tone of Twitter comments about the gala. Watson was in charge of analyzing the tone of the tweets. It’s a bit “corporate sponsorship”-sounding once you get IBM involved, but I loved it, including the fact that Karolina couldn’t sit down on the way to the event. She had to stand in a big Sprinter van.

En route! Please comment on all of my social media accounts b/c my dress will react to your emotions! #cognitivedress #emotionalintelligence #wearabletech #MetGala #MetGala2016 @georginachapmanmarchesa @marchesafashion @ibm

The Met Gala is about fashion as art, and sometimes we must suffer for art! It’s probably the one event where it’s a bonus if you wear a gown that prevents normal movement. The better to view you as a museum exhibit, my dear.

These designs embodied the exhibit’s theme and were true to their designers’ styles at the same time, so they were the clear winners of my combo award … until I remembered that Katy Perry had already done the light-up dress at the 2010 Met Gala, with a design from light-up-fashion specialists CuteCircuit. 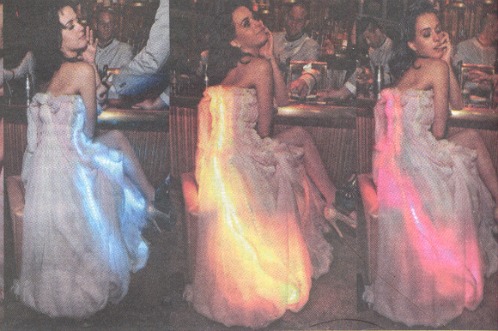 While examining CuteCircuit’s website, I realized the company had done a Twitter dress as well, back in 2012. (That dress had actual, readable tweets, too, not just mood lighting.) I couldn’t drag myself away from CuteCircuit’s website. Their custom-made pieces include the Galaxy dress, which I would very much like to wear. 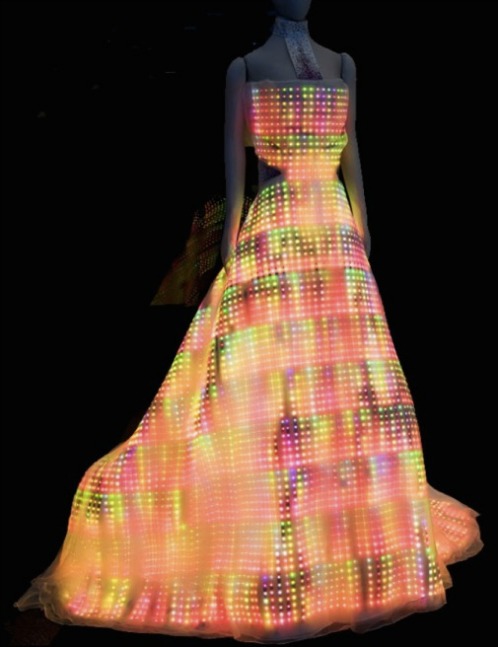 They even have some ready-to-wear. You can recharge the K-Dress via USB …

… and wear it with Sparkle Booties and the LED-illuminated Mirror Handbag. 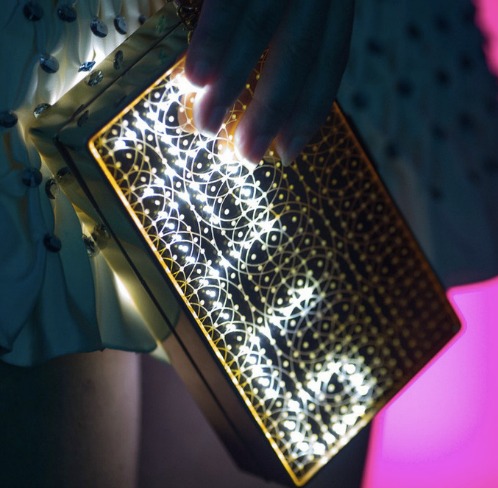 This somewhat dampened my enthusiasm for last night’s dresses … maybe unfairly, because it’s not like anyone working today can claim to have done light-up dresses first. Designer Diana Dew did electric dresses with much less advanced technology in the 1960s (and it’s not even clear that she was the first). 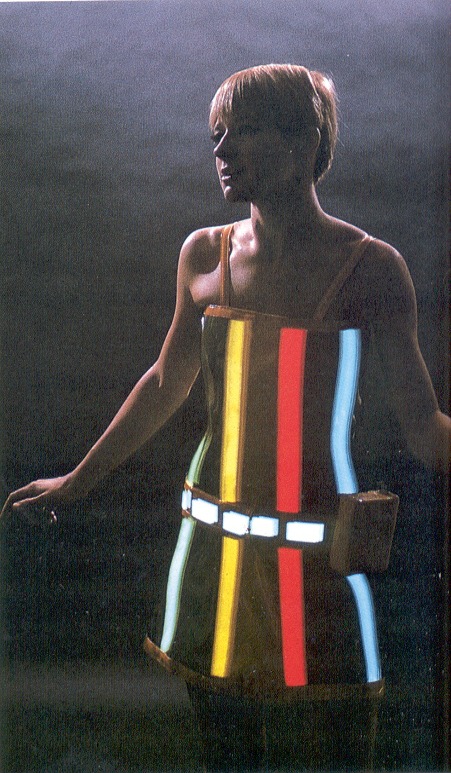 Also,Twitter user Ken Nichols pointed out that Microsoft Research did a Twitter dress of sorts in 2011, a year before CuteCircuit, though I don’t believe that paper design, which involved projection, was wearable.

After pondering all of this information, I decided that Karolina and Claire were beautifully, perfectly dressed for the theme by inventive designers. But the catch is that my award is the Best Dressed/Wear What You Want combo award. To be eligible, you can’t merely look beautiful because that’s too damn easy! You must dare to be different. Therefore, my combo award goes to the woman who couldn’t wear a light-up dress to this event because she’d be repeating herself … Katy Perry.

Katy’s dark Prada gown with steampunk-ish brass key-and-padlock embellishments popped amidst the silver and light colors. She worked her hair, makeup and accessories into the look seamlessly. I appreciate that she didn’t undercut the dress with traditionally “pretty” styling choices. Her sleek, black beehive hairdo and short, blunt bangs struck me as retro-modern. Her bleached eyebrows, blue eye makeup and black lipstick screamed, “Fuck the ‘natural’ look.”

I’m crazy for a long black glove for evening, and the fact that Katy’s were fingerless made them even better.

A touch of humor is a good thing, and Katy provided that by attaching a white Tamagotchi to her dress — Tamagotchis being the demanding digital “pets” that were very high-tech and popular in the 1990s. Her date, Orlando Bloom, wore a matching one.

Katy gets extra-extra credit for her proud, Victorian-robot-lady poses and serving FACE for days. I like the contrast between her and the regular humans in this photo.

So there you have it. Karolina Kurkova and Claire Danes are regular best dressed, but Katy Perry is the winner of the Best Dressed/Wear What You Want grand prize. For Perry’s runner-up, I present Sarah Jessica Parker in her suit by Monse.

First of all, any time you want to dress like Adam Ant is the right time to dress like Adam Ant. Also, this was a truly radical choice because SJP knew everyone would look at her in bemusement, thinking, “Did you not get the memo? Hamilton is not the theme.” Her pairing of man-made and machine-made fashion was much more subtle than a robot dress. As she explained to the New York Times, Fernando Garcia, one of the Monse designers “… introduced us to these embellishment artists in Brooklyn called Le Studio Anthost, who take the idea of old-fashioned couture embroidery and, with technology, apply it to fabrications using paint. It was the perfect marriage of technology and the hand of man.”

Being willing to stick out like a sore, non-robot thumb meant SJP would have really given Katy a run for her money in my mind if her beauty choices and accessories made more of a statement. Speaking of beauty choices, a Best Dressed/Wear What You Want honorable mention goes to Lupita Nyong’o’s high-rise hairstyle, which (literally) elevated her shimmering, non-silver Calvin Klein gown to alien couture.

I have some other attendees to mention tomorrow. Overall, the thematic dressing was a big improvement from the disappointing punk efforts of 2013. Everyone gets an A for effort!

You might also like
My Best Dressed at the 2016 Hip Hop Honors Is ...
Today's eBay Picks Continue the Pink Theme
M.I.A. Says, "Stick It!"
Previous Post: « Jewelry Fo Yo Momma
Next Post: Best of the Rest From the 2016 Met Gala »