I named my Best Dressed/Wear What You Want award winners for the Metropolitan of Art Costume Institute gala in yesterday’s post, but I need to shout out some other favorite looks.

Will.i.am’s floral-sleeved Gucci suit was gorgeous and his V. Stiviano-worthy visor was an unexpected, funny-but-cool accessory. He also had his own AneedA “device-agnostic virtual assistant” sewn into his collar.

Another dude making a big effort to fit the “Manus X Machina” fashion-meets-technology theme was Zayn Malik, outfitted in an armored suit by Versace. Yesterday I said that the red-carpet robot look got old pretty fast, but this is a special case!

Actresses Alicia Vikander and Michelle Williams were both outfitted by Louis Vuitton in short dresses with ankle-high booties. Normally this super-cute but unshowy look wouldn’t be anything to write home about but it was unexpected for this event, and the ladies looked so comfortable next to all the heavy, floor-length, silver dresses.

… as did Rose Byrne.

Lily Collins’s Tiffany choker was made even more special by her futuristic face/body stripe.

You know I’ve loved a single statement earring since the 1980s, and Maria Sharapova made a big, big statement!

Getting back to clothes, Emma Watson had a creative and environmentally friendly take on the theme: Her Calvin Klein dress was made of fabric that came from recycled plastic bottles.

I have to dig up a story I did for the Wall Street Journal in the ’90s that, if I recall correctly, was about recycled-bottle fashion. It was all fleece back then. Look how far we’ve come.

Finally, there have been a number of stories about the queen of 2016 Met Gala subtlety: Sarah Jessica Parker. She was my Best Dressed/Wear What You Want runner-up yesterday for, on the surface, dressing like it was “Opposite Day.” But her Hamilton-esque suit, as SJP explained to the New York Times, was embellished by “Le Studio Anthost, who take the idea of old-fashioned couture embroidery and, with technology, apply it to fabrications using paint.” W Magazine got a beautiful detail shot of that work.

@SarahJessicaParker, wearing @MonseMaison, disrobes on the #MetGala red carpet. See more photos by @DrielyCarter on wmag.com (link in our bio).

I was a little disappointed I didn’t spot any iconic vintage, like a1992 Thierry Mugler bustier, 2007 Balenciaga robot leggings, or something from Hussein Chalayan’s 2007 transformer collection. Or how about Chalayan’s 2000 wooden skirt that can be converted to a coffee table? That would be so handy … you’d always have a place to rest your glass of Champagne. 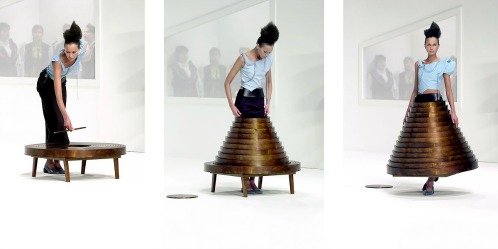 At least the flowers on Allison Williams’ Peter Pilotto dress were 3D printed! I’m still waiting for the day 3D printing changes all of our lives. I think it’s coming. It’s just taking its time.

I’ll leave you with Madonna making the most of Vogue’s “Manus x Machina Experience Booth.”

The one and only @madonna in @givenchyofficial inside the #ManusxMachina Experience. Directed by @gvsgvs. #MetGala

Made me think of her “Celebration” video moves!