I meant to wish Queen Elizabeth II a happy 90th birthday yesterday, but then we tragically lost another royal and I had other things on my mind. So happy belated, Liz!

My jewelry line is inspired by powerful women, especially royals, and one of my very first major designs was my Gloriana necklace, adorned with more than 2 carats of diamonds in honor of Elizabeth I. 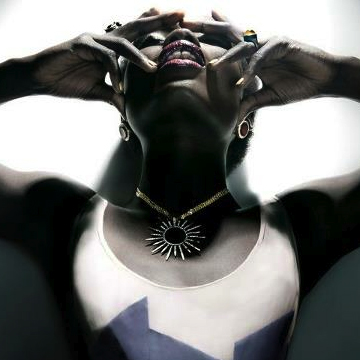 The Gloriana necklace as seen on model Tina J.

I haven’t created a design in honor of the first Elizabeth’s namesake. In general, I avoid immortalizing living people unless I know them personally. But, I admit, I am increasingly tempted in this case. It’s sometimes a single anecdote of royal attitude that inspires me, and Liz the Second is so damn queenly! This story about Margaret Thatcher is just as fabulous as what Elizabeth I had to say about the height of Mary, Queen of Scots. And I love how she’s firmly resisted the possibility of abdication in favor of her son Charles … thus far. Personally, I hope the latest rumors are untrue and she rules till the age of 101 just to piss people off.

Also, I’ve seen Elizabeth II in the flesh twice, so in my mind we’re … well, not best friends, but definitely good acquaintances who could have Pimm’s together once in a while.

That little robe and those big cheeks! George reportedly got to stay up 15 minutes past his bedtime in order to shake hands with the president.

UPDATED TO ADD: I forgot to mention I totally need to be the Queen’s social media guru.

You might also like
She's Not a Mad Queen; She's an Angry Queen.
Cleves Ring: Completed
Recommended Reading: Anne Thériault's Queens of Infamy
Previous Post: « RIP, Prince
Next Post: Anklets and Chokers. Not Just for Coachella! »