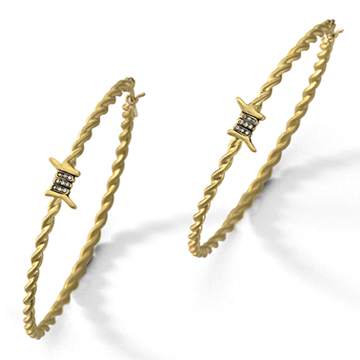 Meanwhile, multiple piercings continue their march from sex-ay to standard. Last year, inspired by the plethora of single stud earrings I’d designed, I got my fourth earlobe piercing. This year, I added a tragus piercing …

… and a fifth lobe piercing. I felt so cool.

About a month after the latter, I was amused to find out that I was not a piercing rebel without a cause, but a basic bitch, thanks to this New York Times story about women over 30 going crazy for multiple piercings.

The Telegraph ran a similar article this weekend, just bumping the basic-bitch multiple-piercing age up to the over-40 crowd. I totally identified. As one organizer of a piercing party told reporter Kerry Potter, “Straight after being pierced, women would get on their phones, take a selfie and post it on Instagram.” Check!

The sentence from Potter’s story that best sums up the trend is this:

“Suffice to say, if the Unicode Consortium ever wanted to create an emoji signifying midlife crisis, a woman’s ear with multiple earrings would be a shoo-in.”

I literally laughed out loud at that because I’ve created a lot of emoji stud earrings, including designs that SHOULD be emojis. Maybe I need to create an emoji earring of an ear wearing emoji earrings. It will be the earring version of rapper Rick Ross wearing a diamond pendant representing his own face. Earring-ception!