Ten years ago,  MrB and I visited Hever Castle, the childhood home of Anne Boleyn. I wore my Boleyn initial necklace. A photo we took that day was the first picture of myself on this blog, posted on July 27, 2007. 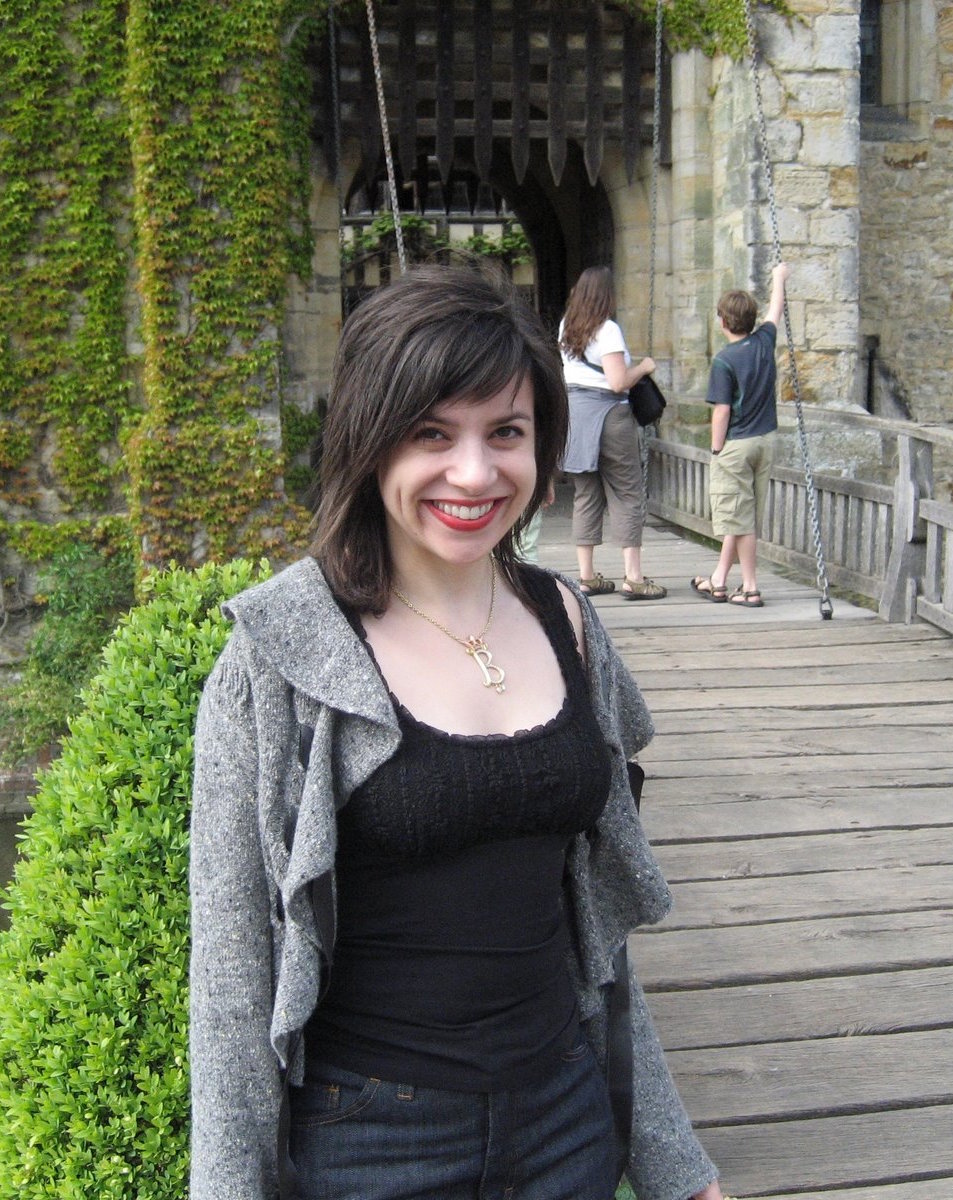 As I wrote yesterday, I didn’t expect to be making a big commitment when I published my first blog post on July 23, 2007. It was a placeholder post to give me somewhere to start if I ever got a serious urge to blog. I got serious two days later, thanks to Britney Spears.

Spears was going through a terrible time in 2007. In February of that year, she walked into a California hair salon and shaved her head. A couple of days after that, she attacked a photographer’s car with an umbrella. In between that breakdown and the following February, when Spears was first placed under her father’s conservatorship for her own safety, Britney’s people reached out to OK! Magazine and scheduled a cover shoot and interview that was supposed to prove that Spears was, indeed, okay. Things didn’t go as planned, as you can see. 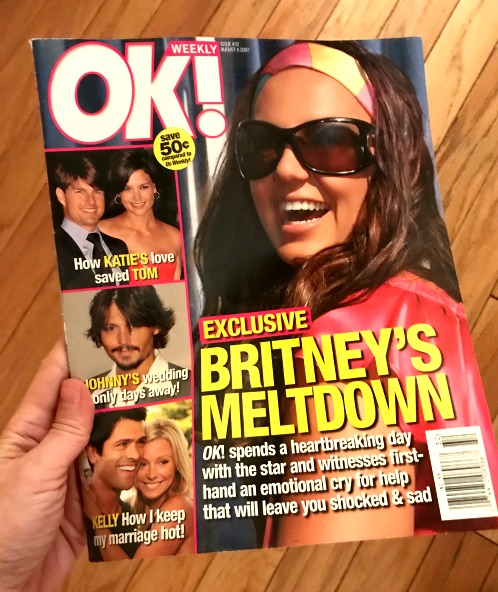 Instead of talking about her “career comeback” and “clearing up misconceptions,” the then-25-year-old gave OK! a firsthand experience of the “dark side of fame,” as the cover story related.  Britney turned up late; used a silk outfit as a napkin after eating a chicken lunch; and didn’t budge when her Yorkie puppy pooped on a $6,700 Zac Posen gown. The story described her as “disoriented” and “erratic” and noted that she used the restroom repeatedly without closing the door. Finally, she “stormed out,” still wearing the shoot’s borrowed shoes, dress, and jewelry. 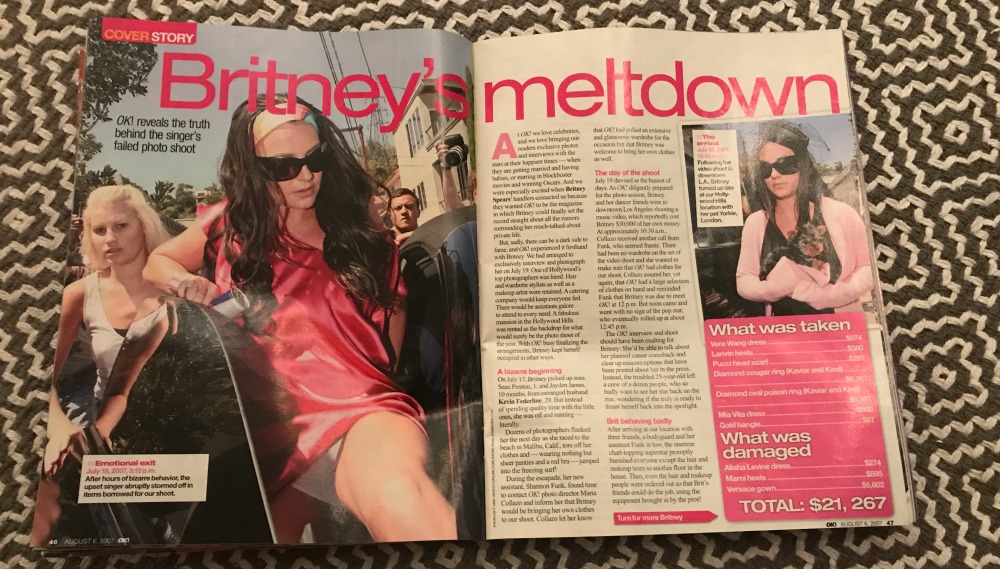 The magazine listed the lost and damaged items. 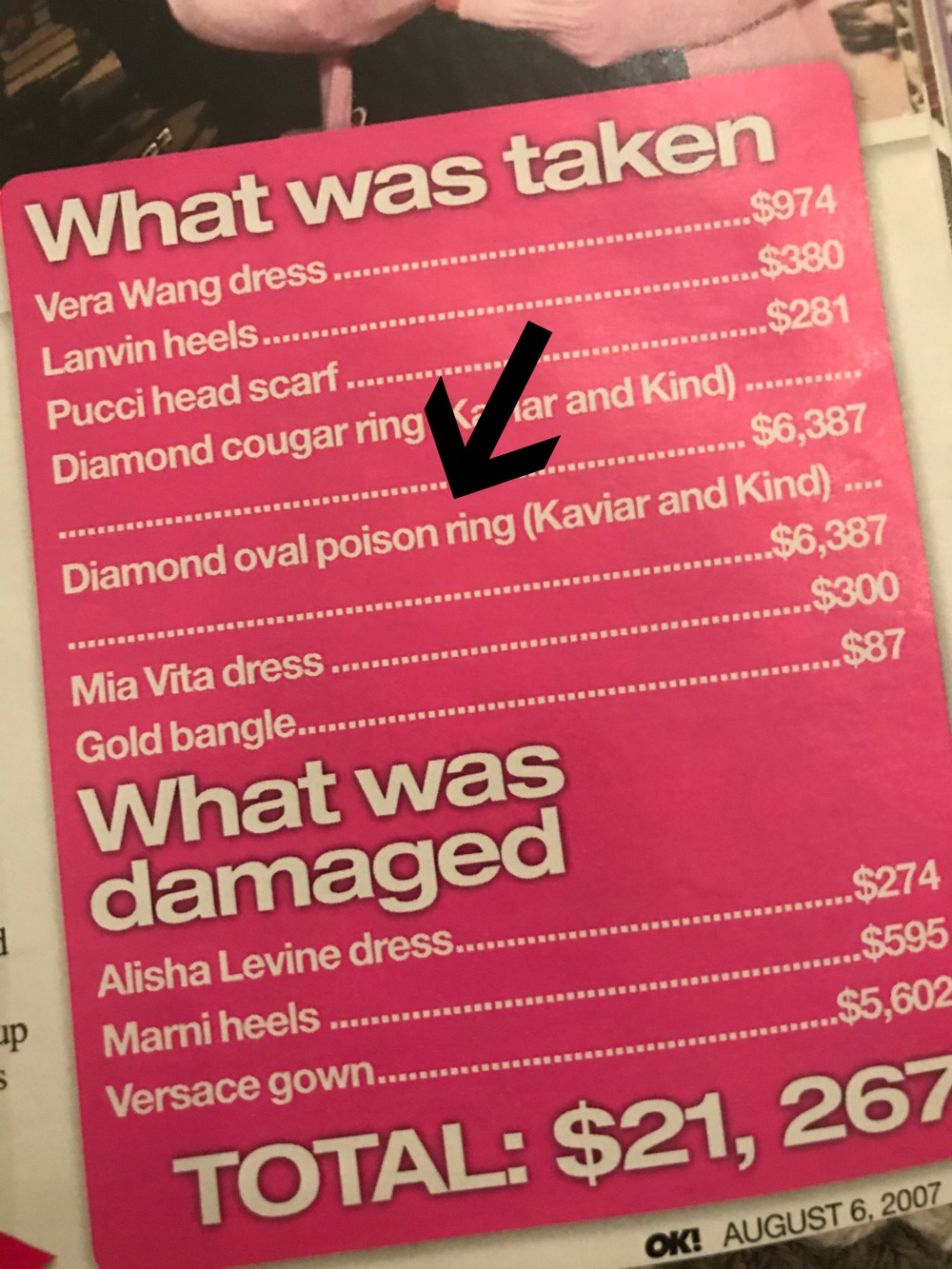 Hello! The poison ring credited to the now-defunct jewelry store called Kaviar and Kind was my 18K gold Borgia ring. 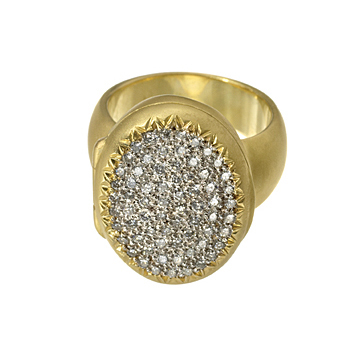 I learned about all of this in the middle of the night. My friend Jane — who had decided to do a little light reading on the train — spotted the ring description, had a hunch, and got in touch.  I ran out to a 24-hour magazine stand to get OK! and took a close look at Britney’s hand. 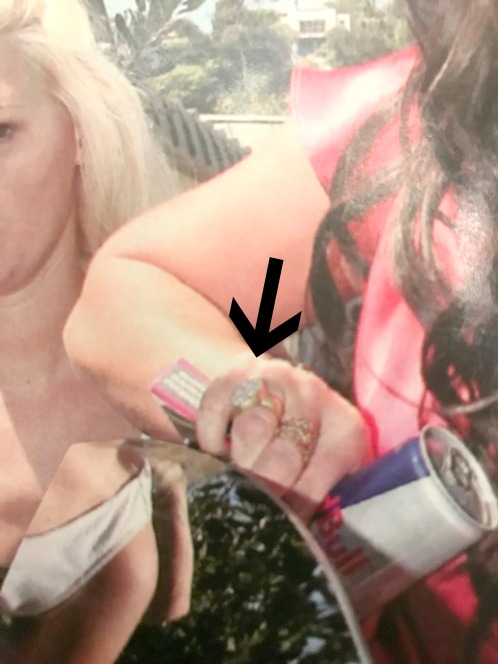 A close-up of the first inside-magazine photo. There’s my ring!

I had to contact the store the next day to get confirmation. They had forgotten to tell me that a freaked-out superstar had run off with my expensive ring six days earlier.

Well! With a crazy story like that plus a brand-new blog, it was clear what I had to do. Maybe I would have started blogging fairly soon anyway, but maybe not, so shout out to Britney for lighting a fire under me.  By the way, OK! paid for the ring and all was forgiven. In fact, I was quite concerned about Britney’s well-being, and I hated people making fun of her for what was obviously mental illness. I’m relieved that she made it through. I like to check her Instagram once in a while, just to see how she’s doing.

What do you do at 2:00 o'clock in the morning when you're jet lagged overseas? You rearrange furniture for two hours with your security then realize when you wake up it actually looked better the other way ?

As for the ring, the last time I spotted it on Britney was a month after the infamous shoot, on another OK! magazine cover. 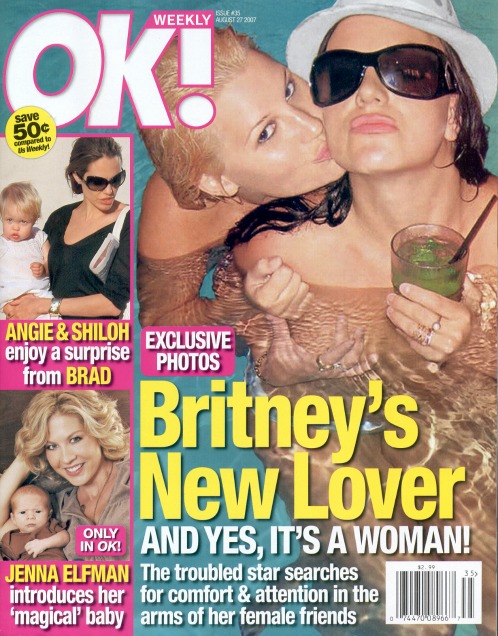 Britney, if you need a new Borgia ring, call me! An exchange (for money) can be arranged. It would be fun to see her in newer designs though, like my Queen of Scots snake ring and/or the matching snake tiara. Britney has always worn snakes well.

Anyway, that’s the long version of my “how I started to blog” story.  Back to the Valentino sweater from my first outfit (actually, half of an outfit) blog photo. Click to enlarge. 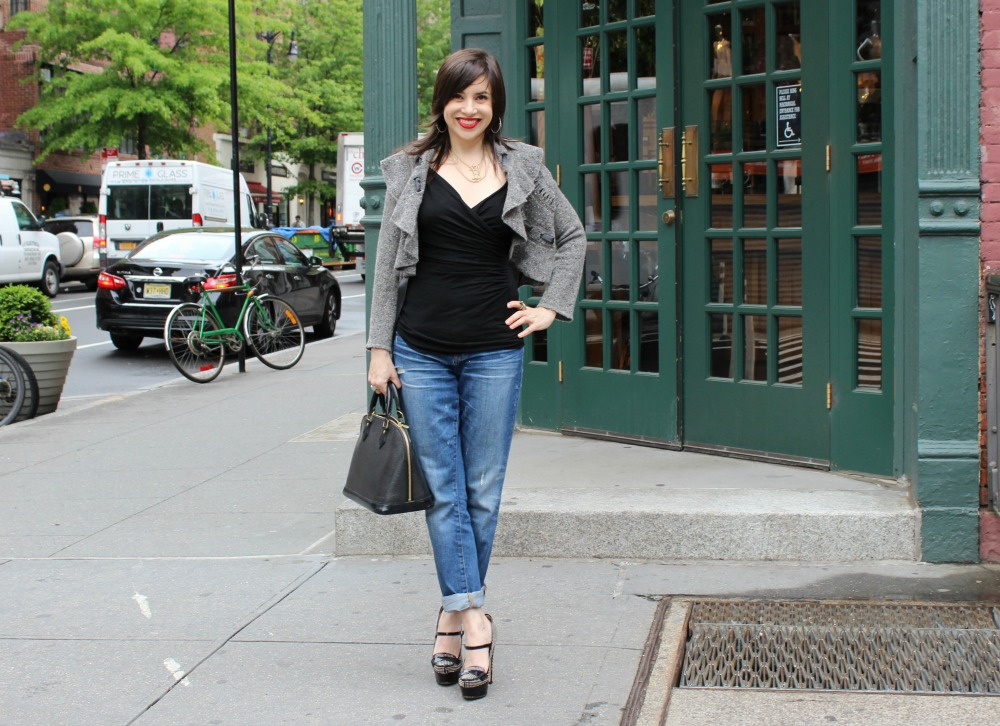 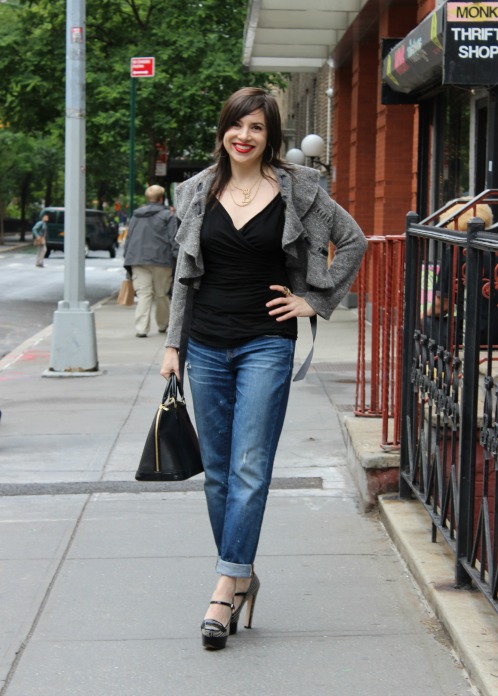 I don’t think I’ve ever shown the back before. 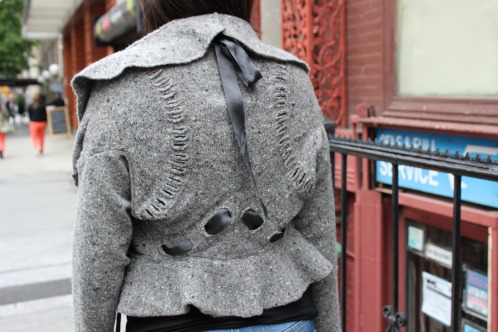 I love the texture. 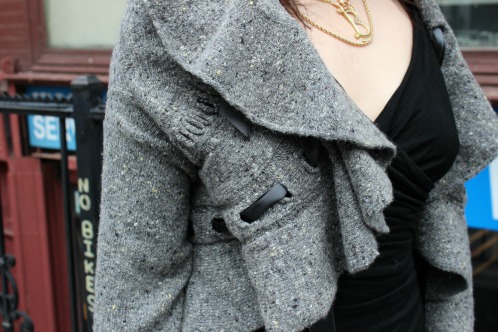 You know what else I love? Meandering through a blog post and only getting to the sweater mentioned in the post’s title after a giant Britney Spears digression. I can’t do that in straight journalism, but here anything goes.

If you didn’t catch my blogversary video yesterday, you can check it out right now and see the sweater in action.

You might also like
Somewhere, a Peacock Curses Me
Amber Rose's Engagement Ring (Plus Whipahol)
Living High on the iHog ... in Latex
Previous Post: « A Big Blogversary: I’m Turning 10!
Next Post: Wednesday’s Videos: I’m a WJA Winner! »