Yesterday, after I gave Kanye West a pat on the back for his edgy wardrobe choices, he went right back to doing what he does best: complaining about how the world won’t let Kanye West be great. While venting at a second show in Atlantic City last night he said the Grammys have done him wrong for years, so don’t expect to see him at the 2013 ceremony despite his six nominations. I feel like I should have known that he was still angry about losing the Best New Artist category to Maroon 5 in 2005.

No one rants like Kanye. Of course, once you get on MTV’s stage and take a microphone away from Taylor Swift, like Kanye did in 2009, you’re the all-time king of rants, but I appreciate that Kanye doesn’t rest on his laurels. He’s done plenty of impressive rants since that one.  I’ve been thinking about his January 2012 Twitter rant recently. Some of that rant focused on how hard he worked to make it in the fashion industry.  (Unfortunately, the fashion industry didn’t appreciate his efforts.) But what really stuck with me was his plan for a 22-division company where diverse minds including doctors, car designers, musicians and bankers would “help simplify and aesthetically improve everything we see hear, touch, taste and feel.”  He was super-enthused about it.

“I have started a new company and I’m so excited about the name. … it’s got the best name ever of all companies of all time!!!”

“DONDA is a design company which will galvanize amazing thinkers and put them in a creative space to bounce there [sic] dreams and ideas.”

Does anyone know what happened to DONDA?! Because I still want to submit my resume.

Another rapper, up-and-coming Azealia Banks, also is feeling a bit burned by the fashion industry.  I had my eye on Azealia for a little while. In 2011, I was entranced by her YouTube video for her song 212.

I like to support female artists and the fact that Azealia is a New Yorker was a bonus. My rapping friend Gangsta Boo is from Memphis and based in Atlanta, so I liked the idea of working with a hometown gal too. In January, when Azealia was booked to play the Coachella music festival, I had a short, friendly email exchange with her (now-ex) manager. I sent off a set of NYC rings, with the promise of 212 rings to follow. (I don’t do that kind of thing too often; I have to feel the person and the jewelry are perfect for each other.) Two weeks later, Azealia was signed to a major label, and I was excited. A week after that, the fashion world pounced and she was performing at a party at Karl Lagerfeld’s house.  I was less excited because that didn’t bode well for a Wendy Brandes collaboration, but I looked for the sterling-silver lining: “At least I’ll be able to wear those 212 rings myself!” I said to my gorgeous designer friend Stacy Lomman. 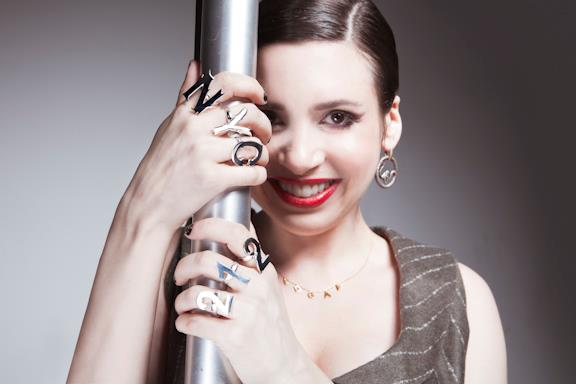 That’s me wearing them!

But I added, “I hope Azealia doesn’t love this experience too much, because Karl has dropped bigger people than her.” It took less than a year for poor Azealia to find out how some — not all — of the fashion business is. In a recent interview  with Hypetrak.com, she said, “I was this fashion darling …” She continued:

“You can very easily kinda get sucked up by the fashion world because they bring artists in to kinda make themselves look a certain way, then as soon as someone new comes out they’ve completely forgotten about you. They’re so fickle … If you place your faith in the fashion world you will get let down as an artist. so it’s very important to remember what you’re here for.”

Banks still spoke positively with her collaboration with Alexander Wang and I hope that continues as he takes over Balenciaga. A good music-fashion partnership is so much more than free outfits. It can turn an already-famous performer into an iconic figure, the way Jean-Paul Gaultier’s conical bras did for Madonna. Jennifer Lopez was well-known when she wore THAT green Versace dress to the Grammys in 2000, but that barely-there outfit landed her on the front page of newspapers. It also lent credibility to Donatella Versace, who faced some doubters when she took over her brother Gianni’s fashion house after he was murdered in 1997. More recently, Lady Gaga’s work with stylist Nicola Formichetti helped him win the job of creative director of Mugler. (Azealia Banks happened to sit front row at this September’s Mugler runway show, where a new Gaga song debuted.) Anyway, an aside to artists, whether acclaimed or aspiring: If I work with you at all, I’m going to stick with you. My jewelry is influenced by ancient Egyptians and Tudor queens. Obviously I take the long-term view!

Someone else who has a long-term view of fashion is stylist and fashion editor Polly Mellen, who worked with famed editor Diana Vreeland and photographer Richard Avedon. (Watch Unzipped, the documentary about designer Isaac Mizrahi, to see Polly stealing every scene she’s in.) Have you ever seen the Nastassja Kinski/python photo? That was a Mellen-Avedon collaboration. This month, the 88-year-old Mellen did a Q&A at the 92nd Street Y in New York City. I didn’t go and I wished I did after I read the WWD article about it.  I kept the article because of what she said she learned from the late Carmel Snow, the esteemed editor of Harper’s Bazaar.

If some of you fashion media folks still haven’t come up with a New Year’s resolution, feel free to use that. Hell, maybe the next great designer will be Kanye West! Anything is possible. Look for the DONDA label!

UPDATED DECEMBER 31, 2012, TO ADD: Just when I think Kanye has done everything he can do on stage, he takes it one step further by announcing that Kim Kardashian is pregnant. I think he looks very happy! And like I’ve said before, those “gold digger” jokes don’t even make sense. She has her own money. You may not like how she got it, but she has it!

You might also like
Throwback Thursday: The 2006 Photo of My 2016 Oscars Dress
Rub Me the Right Way
What We Wore: Independence Day Colors
Previous Post: « Kanye West Does Lady Gaga (No, Not in THAT Way, You Pervs)
Next Post: Jewels of the Month for 2012 »