We left London for Paris on Monday, August 3. Paris empties out in August because so many Parisians take a nice long holiday. (Several of our Parisian friends were in New York while we were in their city.) I think everyone who was left in the city was sitting along the Seine that night.

Whenever we’re in Paris, MrB and I head to the Bateaux-Mouches for a cruise down the Seine. It’s our tradition. We tune out the noisy busloads of tourists and the tour-guide narration that we’ve heard before, and admire the city. This is the first time we’ve done it at night. I’m always amused by the way people — whether on dry land or another boat — wave at other people on boats. What is that about? There was even more waving at night than there usually is during the day. My arm got tired from all the waving back. I said to MrB, “I’m glad we don’t have to do this in cars!” People would be crashing left and right.

We were on the Seine at about 11 p.m. and the river banks were lit up so we could see all the folks picnicking, dancing, schmoozing, waving at boats, and smooching.

I’m not sure that there’s any place in New York City like this. Where can you stay out late, for free, and socialize over an open bottle of wine? You try that here and you end up inspiring a Law & Order: SVU episode.

Anyway, I never get tired of taking photos of the Eiffel Tower. 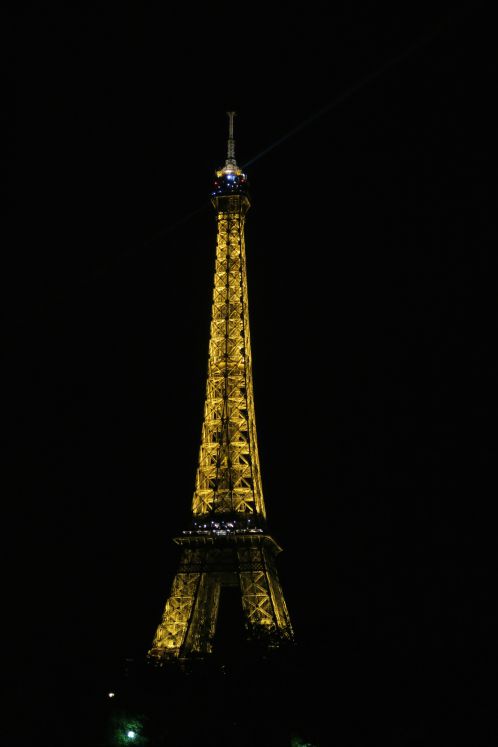 Notre Dame was looking lovely too. 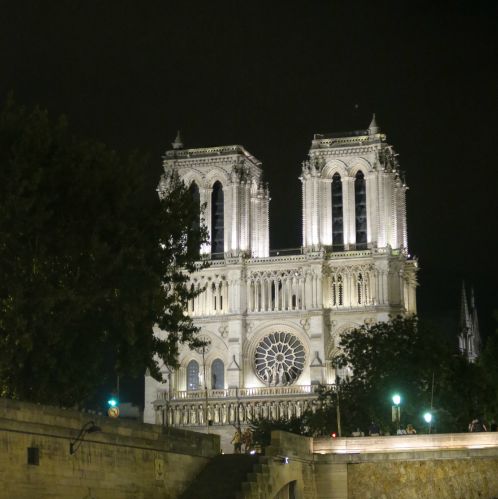 No hunchback in sight.

Here’s my boating outfit (not photographed on the boat). 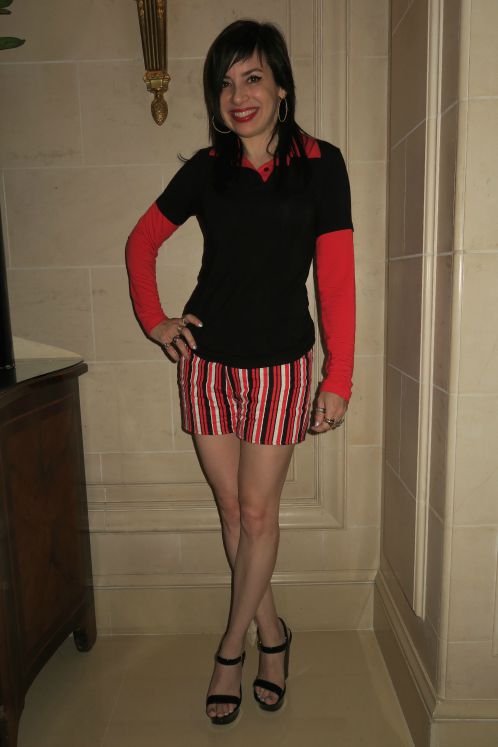 The next day we went to the Louis Vuitton Foundation. We hadn’t planned on going, but we were told we had to see the boat-shaped, Frank Gehry-designed building. I’m glad we took that advice. I also enjoyed the Pop art exhibit that was on display, but the architecture is the most compelling reason to go. We paused for an outfit photo on an upper level. If this top-shorts-gladiator-sandals combo looks familiar, it’s because I wore it in Las Vegas at the beginning of June. 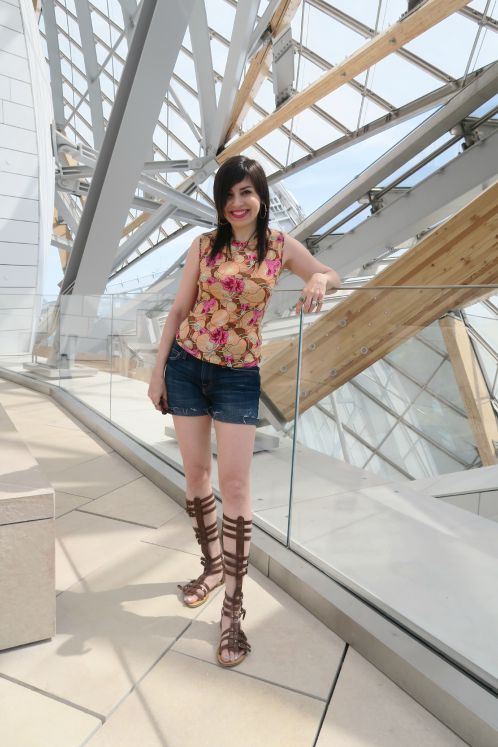 After we viewed the art, we went outside to take a closer look at the Foundation’s cascade of water. 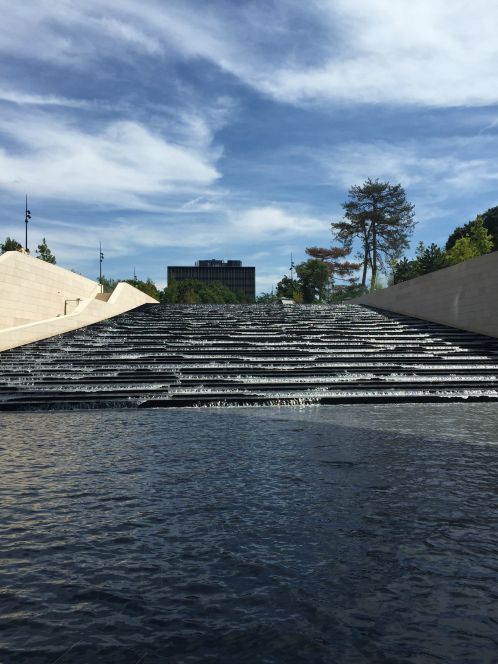 The grotto outside the Gehry building.

Then we wandered into the Bois de Boulogne, the huge park that is the Foundation’s backyard. I’m not sure I’ve ever explored it before. There’s a Coney-Island-style amusement park for kids, and a supercilious peacock.

Another place that we had to go to was the Jean-Charles de Castelbajac store near Boulevard Saint-Germain. I discovered it in 2009 and go back every time I’m in Paris. I’m addicted to Castelbajac … and it looks like I might be going through some bad withdrawal because I got there and discovered an empty storefront. Same as with Opening Ceremony in London! I’m starting to take this personally.

Another thing I’m starting to take personally is the abuse Poodle Maps is dishing out. Literally, that app had us walking in circles on Wednesday. I kept re-entering our route to make sure I hadn’t done anything wrong, and I hadn’t. It sincerely wanted us to circle endlessly around all our destinations. Despite Poodle’s best efforts to thwart me, we made it to an interesting exhibit on designer Jeanne Lanvin at the Palais Galliera fashion museum. We also saw how Céleste Boursier-Mougenot had flooded part of the Palais de Tokyo for a work called Aquaalta, after the annual flood in the Venetian lagoon. We didn’t have time to row through the water on a little boat, but we were able to observe. MrB didn’t appreciate the art very much, and my saying, “Look, the observer is part of the art!” fell on deaf ears. Such a philistine.

We dashed through the Rue Saint-Honoré to peek in all the fancy shops, including the fashion-forward concept store Colette. I’ve never bought anything there, but I like to look in the fine-jewelry cases and show MrB exactly where my designs would fit in. Then we dashed back to the hotel to change to meet Alyson the author from England. She and her family were taking her 82-year-old mother on her first trip to Paris. So nice! Mum assured us that the city lived up to her expectations. We sat in a beautiful hotel courtyard … 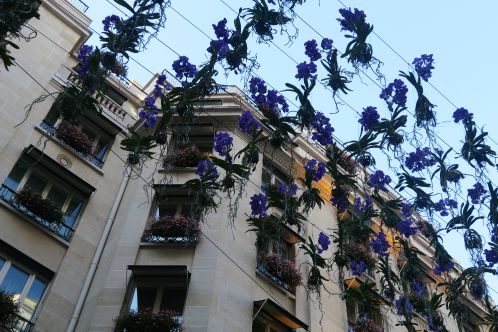 Can I go back now, please?

… where MrB bravely ordered a drink called “In Bed With George,” despite our laughter. I’ve never been one to order cocktails with names like “Screaming Orgasms,” but MrB is made of sterner stuff. 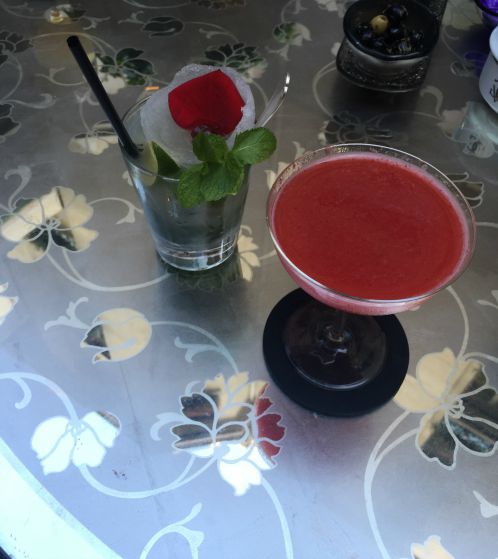 In Bed With George is on the left, with the rose petal. My less embarrassing drink is on the right.

While I didn’t care for this trip’s theme of “favorite store shutdowns,” I did enjoy the theme of “meeting friends in different cities.” First, I saw Monica of iDazzle — who lives in Seattle — in New York and London. Then I got to see Aly in London and Paris. 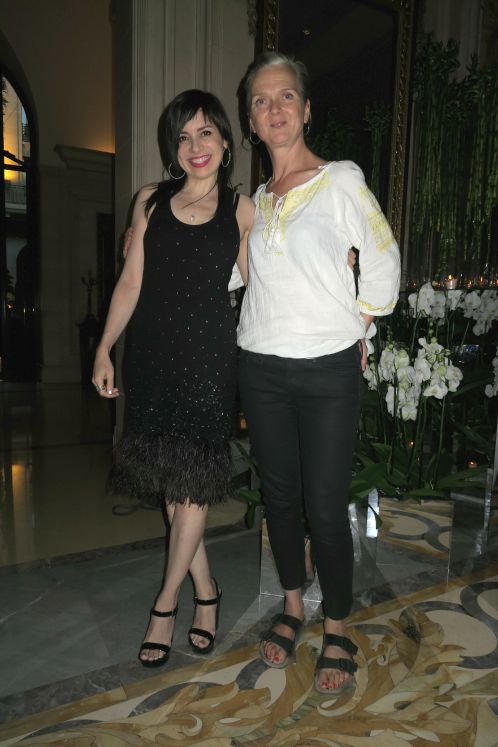 We had to have photographic evidence of this, naturally.

Monica and her family overlapped with us in Paris too, and if we didn’t have to race out of the city to get to St. Tropez, I would have met up with them again.

Here’s what I wore on our last night in Paris, which also seen above with Aly. 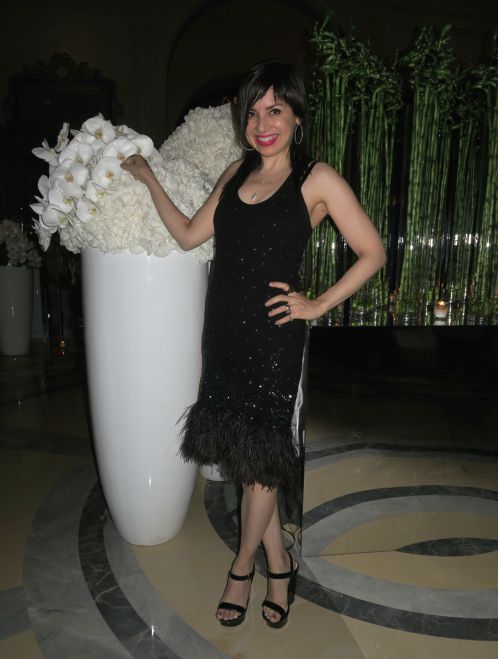 You might also like
Invasion of the Blog People*
My Best Dressed at the 2019 Met Gala Is ...
My Latest Ode to Latex Love
Previous Post: « Wanderlust 2015: London, Bath and Alexander McQueen
Next Post: The Week in Review, Birth-Year Necklaces, Birthday Shout-Outs »