I was on other people’s blogs too!

Speaking of Instagram, if you’re not following my business account, click here to do so.  This week I was hyped about Rihanna’s new tattoo for two different reasons. She got her birth year, 1988, tattooed on her ankle and I was pleased to see that she was wearing several anklets under her new ink. I’ve been posting about ankle bracelets as an emerging jewelry trend all summer. Also, the fact that she decided to flaunt her birth year like that interests me, considering how many women feel the need to lie about their ages. Of course, it’s no problem to brag about your age when you’re under 30, but still! And this comes less than 12 months after Taylor Swift named an album 1989 after her birth year. If three times makes for a trend, I’m going to claim the first position, because I introduced my birth-year necklaces on my blog in January 2013. Here’s my gorgeous friend Tennille wearing her year, 1976. 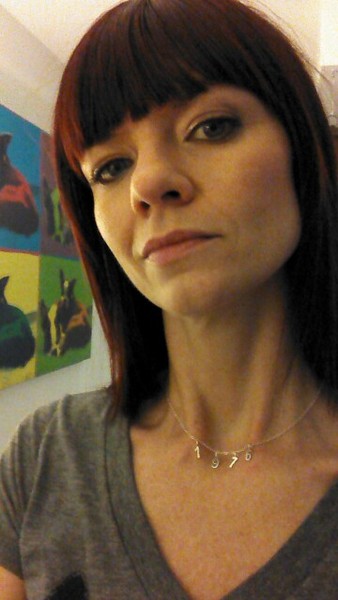 If you don’t want to commit to bragging about your age via tattoo or album name, but you still want to flaunt your reality, I’ll make you a custom birth-year necklace in either silver or 18K gold. Hit me up at info at wendybrandes dot com to inquire, or click the image below to go to my website. 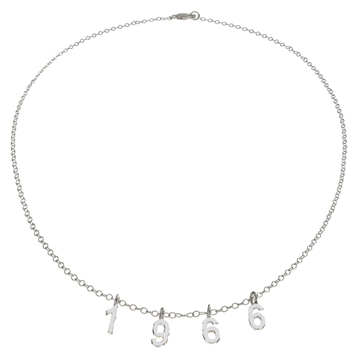 Did this one for a customer a while ago. Click!

I would love to do an oversize, diamond-encrusted, platinum birth-year necklace for Madonna, who was born on this day in 1958. Last year, on this day, in honor of her birthday, I took a photo of my 14 Madonna tour t-shirts. The oldest one is from 1990. I’m pleased to say I found the Yankee Stadium concert hoodie I was missing for the photo. It was lurking in a suitcase.

Moving on to anniversaries, a year ago today, I was at MetLife Stadium in New Jersey for the first of two Eminem and Rihanna concerts. I had really good seats for the Aug. 16, 2014, concert, but those didn’t compare to the next day’s show, where I was second row in standing general admission. If you follow my personal Instagram, beware! Tomorrow I’ll be spamming you with photos from the August 17 show.

All this talk of years reminds me that I was in a jewelry wholesale store on Thursday, buying some chains for new necklaces and having a fun time talking to Sam, the 60-something fellow who always helps me. As I paid by check, he said to his female co-worker, “Look! The check number is 1876.” Without looking up from what she was doing, she replied, “Oh. The year you were born.” Ha!

You might also like
Latex-Look Leggings and PVC Pants
Miro, Miro on the Wall
Meet the WendyB Team and Bid Adieu to Steve Jobs
Previous Post: « Wanderlust 2015: What Wendy Wore in Paris
Next Post: Wanderlust 2015: Feathers Flying in St. Tropez »