Mad Men came through for me last night! It was totally worth skipping the FKA twigs concert I’d planned to attend in order to see the finale in real time.

I honestly didn’t know what to expect, though there were a few things I had ruled out. I never believed Mad Men creator Matthew Weiner would be so obvious as to have Don — or anyone — fall out the window like in the animated opening credits of the show.  The DB Cooper theory struck me as silly. (What would Don need with Cooper’s take of a mere $200,000, when he easily wrote ex-wife Megan a check for a million?) I was intrigued by the idea that Don would come back to New York and McCann Erickson and give a bravura pitch for the famous 1971 Coke commercial known as “Hilltop”. “Co-ca-Co-la” — as Jim Hobart would whisper it — was Don’s account at McCann, after all.

I feared we wouldn’t see anyone except for Don, because the other main characters’ appearances on the show in the last couple of episodes summed them up nicely. 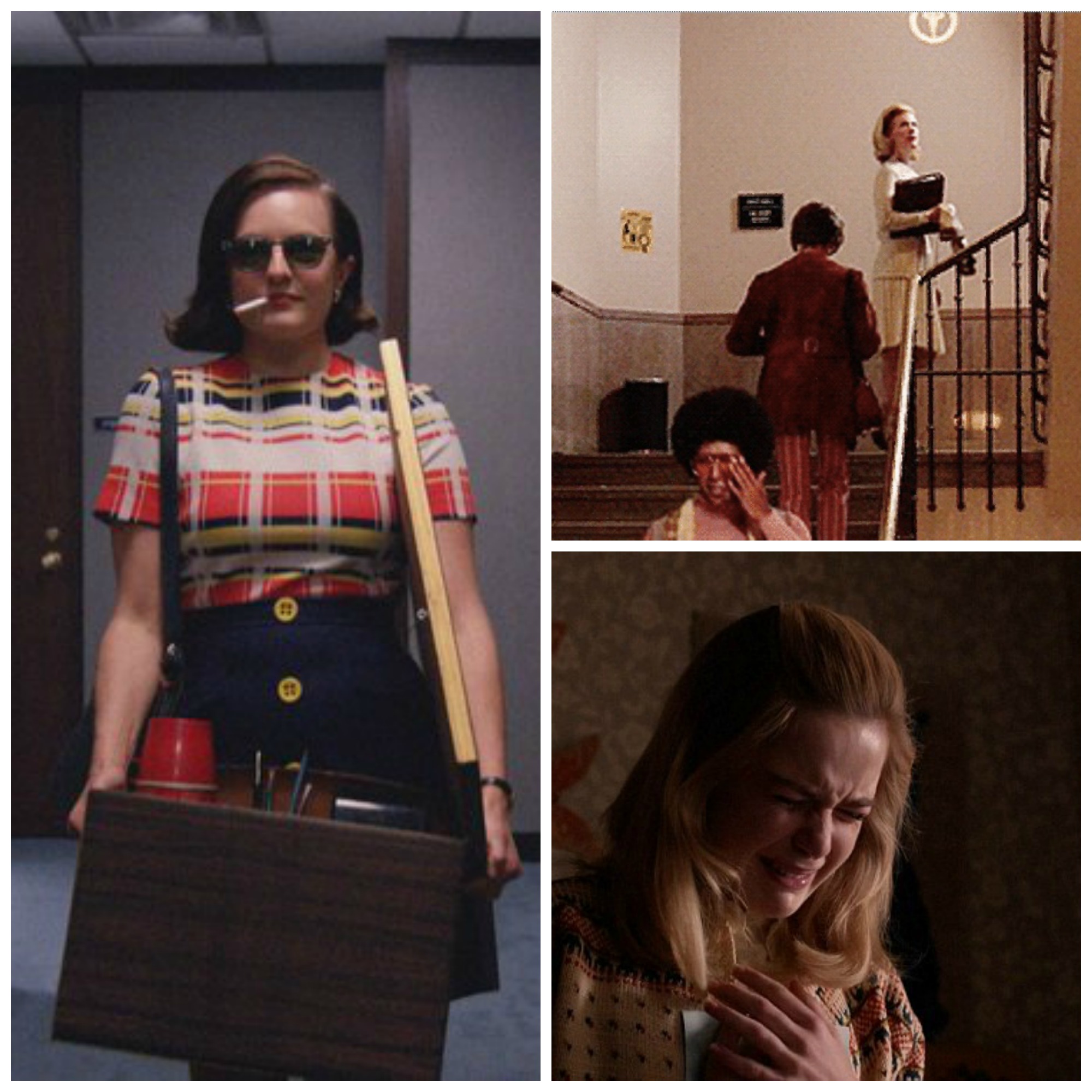 I was relieved to see all the important folks return, and, as a result, I’m bemused by some tweets I’ve seen from people who feel there were too many loose ends. Nah! Everything is all tied up, with everyone onto a new phase of life:

I correctly guessed that we wouldn’t see Don’s second wife, Megan, who left earlier with an air of finality and a $1 million check in hand. It was obvious for a while that she wouldn’t be dead at the hands of Charles Manson and the Family in lieu of Sharon Tate.  Weiner wouldn’t interfere with historical facts to that extent, plus it was confirmed in the April episode called “New Business” in which ditsy but occasionally brilliant secretary Meredith referred to “the Manson brothers.” Not only had the murders already happened, but they’d happened in August 1969 and Mad Men was onto October 1970 at the end. I did appreciate our last visit with Meredith, who, after translating a speech of Roger’s into Pig Latin, was let go (not because she didn’t know that Roger was joking) and cheerfully said she’d land on her feet as always.  Harry Crane’s exit from Peggy’s office while stuffing a cookie in his mouth was what that pig deserved.

That left us with Don continuing his journey west, having divested himself of his job, his Madison Avenue suits, his hat, his Cadillac, and his family … though not his booze or his cigarettes. After he learns that Betty is terminally ill and doesn’t want him to have full custody of their kids, Don looks up Anna Draper’s troubled niece Stephanie, who was last seen pregnant and has since turned over her child to the paternal grandparents. Taking in the hot mess that is sweaty, drunken Don, Stephanie gets him to come with her to a retreat where they can find themselves through seminars and meditation. (I exclaimed “est!,” remembering people who did that course back in the day, but MrB got it right: Esalen in Big Sur.) As with the dour, depressed waitress Diana from earlier this season — I was relieved not to see her again! — Don distracts himself from his own issues by attempting to save Stephanie. When she flees the retreat without a goodbye and he’s stuck with himself and all the hippie types discussing their feelings, he breaks down. He calls Peggy from an outside pay phone and confesses his sins in a way that sounds suicidal, then slumps to the ground, at rock bottom. A woman finds him there and literally offers him a hand, encouraging him to attend a seminar where a man, Leonard, describes himself as overlooked, unwanted food in the fridge. Don wraps his arms around Leonard and they both cry together, and I got seriously worried that Don was going to develop a whole new identity to replace his stolen Draper persona and original, miserable Dick Whitman self. Then Don’s outside, first bathed in a sunset, then sitting cross-legged with a group, chanting “Om,” and I approached panic, thinking, “Is that all there is?” for Don. Life as a navel-gazer? Noooooo! But as Don chants, and the meditation bell dings, a cat-that-ate-the-canary smile creeps across his face. 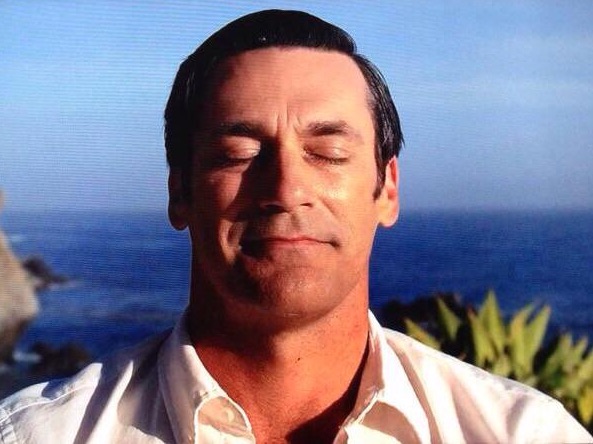 What did you just dream up, Don?

The next thing that we see is that lovey-dovey Coke commercial.

I was momentarily stupefied because if Coke was going to happen, I had expected to see a pitch. And Don seemed so at home with the hugging and feeling crowd. Also, we did just see Peggy and Stan at the office. Were they working on Coke? But then I realized that Don’s smile was from inspiration as much — or more — than inner peace. And if I’d had any remaining doubt there was this: On the left, the young woman who told Don that people were free to leave the retreat at any time, and on the right, a woman in the Coke commercial with the same hairstyle. 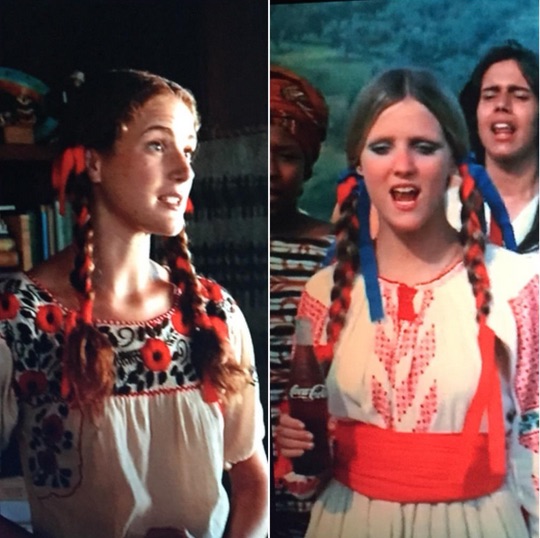 During their person-to-person collect call, Peggy told Don he could come back to McCann and pick up his Coke account, and that’s what he did, newly inspired by the New Age California vibe. The New York Times recapped disapprovingly: “After all that potential self-discovery, Don takes it and goes home and uses it to shill carbonated sugar water.” Meh. That doesn’t bother me at all. If you have mad Madison Avenue skillz, you’re going to want — no, need — to use them. Creative people create! It’s what they do. I relate, seeing as I’m always thinking, “I should write about this” or “That would make a good jewelry design,” especially during important moments. I’m sure if I were in the ad business, I’d be getting inspiration from weddings, funerals and bat mitzvahs. Fight me! (Interestingly, Uproxx put forth the Coke ad idea in April, but discounted it as “hilarious” because what or who would make Don go for such a “hippie-dippie love-fest”?  How was anyone to know that Leonard was coming our way?)

In real life, McCann DID come up with that Coke ad, and the creative director at the time was Bill Backer. Bill Backer … Don Draper. That matches up nicely.

One final thought: I hope the members of the Coca-Cola social-media team will land on their feet as easily as Pig-Latin expert Meredith. I’m concerned for their future because they didn’t tweet anything till long after the show ended on the East Coast. The whole series led up to a Coke commercial and you got nothing? McCann, on the other hand, wittily live-tweeted the show (as it has been doing) ending with, “Thanks, Don. About time you came up with a good idea.”

UPDATED TO ADD: I see some critics and viewers arguing that the Coke ad is Peggy’s (because she’s more in touch with the youth movement? Seriously? Peggy?) but I’m telling you, it’s Don! Look how costume designer Janie Bryant responded when asked if it was a coincidence that the same braided hairstyle appeared on the woman at the retreat and in the commercial.

UPDATED MAY 20, 2015, TO ADD: I hope the guy who kept tweeting me that Peggy and Stan wrote the Coke ad sees this interview with Matt Weiner. You have it from the showrunner’s mouth: Don did it. Plus my positive interpretation of Don’s experience was correct. There were a lot of cynics who were saying things like Don was “co-opting enlightenment to sell carbonated sugar water” but Weiner sincerely loves that commercial. As TVLine reported:

“The idea that some enlightened state, and not just co-option, might’ve created something that is very pure” was an attractive way to end the series, Weiner said. “To me, it’s the best ad ever made, and it comes from a very good place.”

You might also like
You Give Me (Nonexistent) Fever
It's Official: My New Hero Is Antoine Dodson
Uplifting Upchucking
Previous Post: « The Week in Review
Next Post: Balmain Vs Nasty Gal; Billboard Music Awards »