My gorgeous friend Elizabeth Wurtzel and I  went to a screening of a documentary called American Character Along Highway 50, which will be airing on USA Network (motto: “Characters Welcome“) on Monday, January 18.

Route 50, part of the U.S. highway system, stretches from Ocean City, Md., to West Sacramento, Calif., passing through 12 states for 3,000 miles. Legendary television journalist Tom Brokaw made nine stops along Route 50 to interview people about what USA Network calls “the profound economic, political and cultural changes Americans are experiencing during these uncertain, and particularly historic, times.”

After the screening, there was a Q&A session with Tom. Elizabeth piped up with the first and best question: “Is the farmer single?” The farmer in the documentary is Jeff Downs of Colorado. 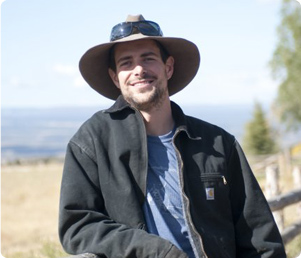 This is Jeff. See why she asked?

Tom told us that Jeff’s wife is not only lovely but cooks the best lamb patties ever. Big disappointment for the single ladies in the audience.

I saved my question for the reception following the Q&A because it had to do with Tom personally, rather than the documentary. As I’ve mentioned, MrB and I watch a lot of Family Guy. Whenever the show caricatures a celebrity, I ask MrB: “Do you think s/he knows that s/he is on Family Guy?” MrB has long insisted that, yes, all the celebrities know they have been featured on Family Guy. I have been especially concerned with the “roving gang of Tom Brokaws” in the episode “Hell Comes to Quahog” (appropriately, considering the topic of the documentary, the episode is about the impact of a superstore on a small town). Because MrB knows Tom, I’ve begged him to ask Tom about this. When he repeatedly failed to do this, I threatened that I would someday ask Tom myself. My day finally arrived! Much to my surprise, the answer was no. Tom Brokaw did NOT know that there is a gang of animated Tom Brokaws saying, “I’d love to lick a lemon lollipop in Lillehammer” on Family Guy! 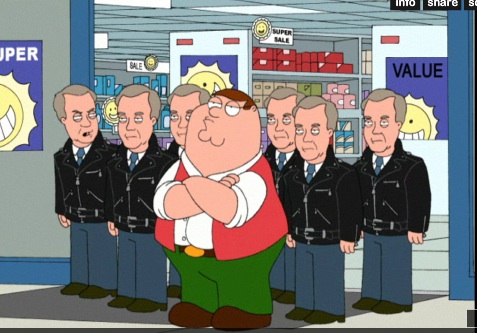 The roving gang of Tom Brokaws has Peter Griffin's back.

See? You learn something new every day. To see the episode, click here. Tom appears in Part 2 at 3:00 and 7:22. Now that I’ve gotten that out of the way, I need to stalk the woman whom Family Guy calls “aging supermodel Carol Alt” and find out what she thinks of her mentions.

UPDATED TO ADD: A lot of celebrities, including James Woods and the guys from Kiss, play themselves on Family Guy so I always check the credits before stalking people.