I have a memory like a sieve when it comes to important things — unless you’ve offended me, in which case I have a memory like an elephant. So even though several gorgeous bloggers told me that NieNie, the blogger who was severely burned in a plane crash last year, was going to be on Oprah yesterday, I forgot. Perhaps if they had said, more offensively, “Hey, bitch! NieNie’s going to be on Oprah. Don’t fucking forget it!” I would have remembered. Fortunately, I kept procrastinating on going to the gym yesterday and, for once, procrastination paid off . I got there right on time to see NieNie walk on stage via the large overhead TV. I was thrilled to see her looking so well. Click the photo to read NieNie’s thoughts on the experience. 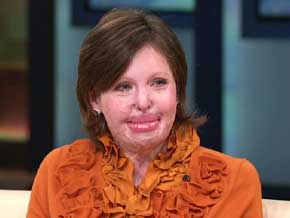 I turned on my set a little late, so if Oprah mentioned NieNie’s blogging connection, I totally missed it. Someone let me know in the comments. That was such a big part of her whole story originally. (Click here to read all my previous NieNie posts.) Maybe the big O mentioned that during one of the times I flipped to other channel. I had to take a few breaks due to a segment in which Andrea, a woman from California who gets aggravated with her small kids and their Play-Doh, was sent to visit NieNie’s family in order to learn to appreciate the little things in life. WTF? That was so random. If the producers wanted to show NieNie at home, they could have had the cameras follow her around without an interloper. (Or — try not to laugh too hard — Oprah herself could have helped NieNie with the kids.) Being with small children is a hard job. Most adults can’t sustain a state of non-stop bliss around kids. Even animals swat their annoying cubs. I think it’s sexist to suggest a woman repress normal emotions about her children because another woman was in a terrible accident and can’t do things with her kids the way she used to. Once you say, “Never express frustration/doubt/boredom,” you might as well add, “Keep a perfectly neat house and when your husband comes home from the office at 5:30 PM, greet him at the door wearing Saran Wrap and holding his martini” and we can all go live our lives in the TV show Mad Men.

Also, during the Andrea segment, Andrea sat next to Oprah, pushing NieNie and her husband Christian to the side. That was crazy too. I was watching for NieNie’s story and there she was, pushed out of the spotlight. From the little I saw of Andrea, she seemed okay. I wanted to tell her, “Don’t let these people buy you a coach ticket for a guilt trip.” But maybe the whole reason she got involved was so she could get a few first-class plane tickets plus be on TV with Oprah. You never know what motivates people. I was once terrorized on a Jet Blue flight to California by the woman sitting in back of me with a toddler. The toddler was fine — whining at a normal level, but not kicking the seat — but the mother was constantly yelling at him. I wondered if calling the flight attendant would make things better or worse. Every time I became determined to call, the yelling would subside for a while so I didn’t do anything. At the end of the flight, I made a point of telling the woman that she had a very well-behaved baby. She said he was tired and cranky from flying to New York and back in 48 hours. Why did he do this? So she could appear with him on one of those Maury Povich paternity episodes. I swear to you, the woman sucked her teeth, tossed her hair and said of her ex-boyfriend, “I KNEW he was the father.” And, yes, I remember this because it was offensive.

Another bonus for being at the gym at that particular time was my discovery of this small Post-It on the floor. 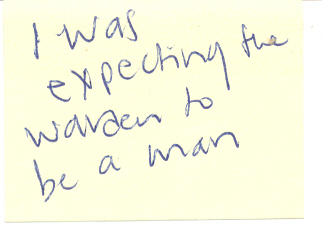 My first thought was, “Women can be wardens too, you know.” Then some questions arose: “Was the writer of this in prison?” and “Is there a paroled felon working out next to me?” and “Should I go home now?”

Speaking of traditional gender roles, I am doing some housecleaning. On the blog, not in my house. What? I’ve never cleaned the house before, so I’m certainly not going to start now. I am just pruning my blog roll. I’m removing people who are on hiatus; if you resume blogging, let me know and I’ll happily add you back in. Other than that, I’m removing anyone who doesn’t interact with me in some way, whether in real life or online. I’ve decided I do way too much for too little and it’s time to draw the line in a variety of ways. This is one of those ways. No more free advertising. If you are NOT on hiatus and you DO interact with me (via comments, a link on your blog roll or real life), then I’ve removed you mistakenly. Let me know in the comments or email me at wbjewelry at hotmail dot com. Of course, if you’ve been kind enough to write about me, I’ll keep that link in the “Thanks for the Love” section in the right column, regardless of your blog status, for as long as your link is good.