This story is giving me LIFE, as the kids say today! On Sunday, Taylor Swift wore a white, cut-out jumpsuit to the Billboard Music Awards, and retailer Nasty Gal proudly claimed credit for it, as one does when a celebrity wears one’s designs.

Too bad it wasn’t a Nasty Gal piece at all, but an original Balmain design that the Nasty Gal team had copied for its own benefit. The Fashion Law blog, which has long called out Nasty Gal for shameless copying, spotted the “mistake.” I literally laughed at the opening lines of The Fashion Law’s scoop:

“In a recent article, we posed the following question: at what point does all of the copying that is so rampant in fashion simply cross the line? Well, it seems we have found our answer. Copying becomes too much when the fast fashion retailer either: a) confuses its own blatant copy for the real thing, and/or b) starts attributing the original design to its own brand.”

I had my own incident with Nasty Gal last year, when it was selling a copy of my famous swear rings that had been mass-produced by some factory and wholesaled to a number of retailers. Nasty Gal was cooperative about removing the rings from its website when I complained. I was pleasantly surprised, because the retailer had previously lived up to its name by having some truly nasty social-media fights with small designers who saw Nasty Gal’s imitations of their work. According to The Fashion Law, a wholesaler can’t be blamed for the jumpsuit situation: “Nasty Gal proclaims that the items included in its ‘Nasty Gal’ collection are designed by its own in-house team.”

The Fashion Law says that after Nasty Gal put its Taylor Swift claim on its Instagram account — an account that has 1.6 million followers — people “filled the photo’s comment section” with the correct designer name. Nasty Gal deleted the post but not before The Fashion Law got a screen cap and only after the jumpsuit sold out. If you’re one of the people awaiting your delivery, be warned. The Fashion Law quoted one reviewer as saying, the jumpsuit “was disappointing. It looks very cheap and poorly made.”

I skipped watching the Billboard Music Awards because I was preoccupied with the Mad Men finale, but I studied the red carpet pictures later, prepared to bestow my coveted Best Dressed/Where What You Want combo award upon some lucky attendee. I didn’t see anything worthy of my top prize — ladies, give the naked dresses a rest, because you’re never going to beat Rihanna’s 2014 CFDA look — but I have to give an honorable mention to rapper 50 Cent, who looked amazing in this ombre jacket.

I’m still poking around looking for the designer name, and when I find it, MrB better look out! I want to dress him up like 50 Cent. That’s how much I love this whole outfit. [UPDATED MAY 20 TO ADD: Thank you to Brittany Siminitz of JCK for identifying 50’s jacket as being by Neil Barrett. Time to take MrB shopping!]

I also liked two flesh-baring Fausto Puglisi looks because of their gold sunburst-shaped accents. Zendaya was wearing a crop top, jacket and pants …

… while Rita Ora let a whole lot hang out in a white dress. Hey! Keep your eyes on the sunbursts, you perverts!

Zendaya had previously worn a Puglisi mullet gown with a giant sunburst motif to the Costume Institute Ball at the Metropolitan Museum of Art.

My enthusiasm for sunbursts goes way, way back because one of my first major designs was my 18K yellow gold Gloriana necklace set with two carats of diamonds. 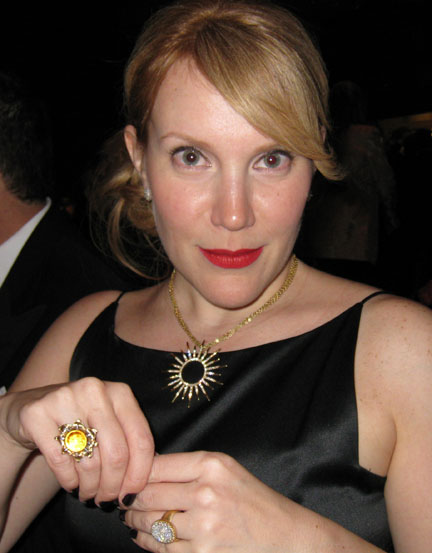 My friend Tina wearing the Gloriana in 2009.

The Gloriana was named for Elizabeth I, one of my favorite queens. Read all about it!