In yesterday’s post about this week’s Fleetwood Mac concert at Madison Square Garden, I mentioned that gorgeous Instagrammer Carrie Courogen was soooo front-row that she played Lindsey Buckingham’s guitar. Twice. Because I already posted the guitar picture, here’s a nice shot Carrie got of Stevie Nicks.

The perfect halo of gold hair and lightning.

Carrie sent me the link to a touching post she did about Stevie’s role as a mother figure to young wimmin like herself. (Carrie’s 23. I could be her mama too! Bwah!) Reflecting on how Stevie never had her own children, Carrie writes, “Just because you don’t have children doesn’t mean you’re not a mother, and we have Stevie Nicks as proof. And shouldn’t we all be thankful for that?” She says:

“Mothers are the best teachers in the subject of life. [Wendy’s personal aside: BarbaraB, do not let this go to your head.] They share their wisdom and knowledge with you, unsolicited, and it’s those nuggets that guide you through life. Stevie has doled out beautiful, motherly guiding words so many times, it’s impossible to pick just one.”

“[Stevie] may never see this, she may never know it exists, or even know how much her love is reciprocated. She may never know that words can’t even begin to say thank you for her influence, at least from me, but at least it’s here for the crowd.”

I think Stevie would love Carrie’s post, so if anyone knows Stevie or knows someone who knows her, send along this link.

Stevie Nicks’s Daughters of the Moon.

Speaking of celebrities who don’t know about the intimate relationships we have with them, my almost-husband Paul McCartney is kicking ASS lately! I meant to say something about “Only One,” a Kanye West song featuring Sir Paul on piano, which was released on New Year’s Eve.  But I was too busy tuning out the media frenzy over a couple of tweets — tweets that really seemed to be knowing jokes, IMO — asking about the unknown dude working with Kanye. Well, tonight, Rihanna surprised everyone with a new song called, “FourFiveSeconds,” featuring Kanye West on vocals and Paul McCartney on guitar. 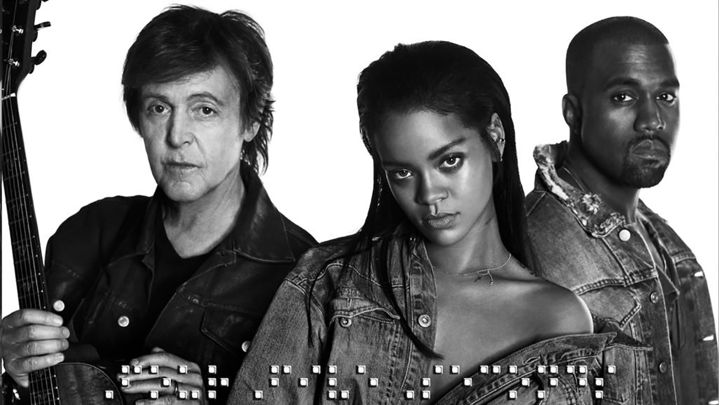 Handsome Paul McCartney and two unknown artists with promising careers ahead of them. Photo via Rolling Stone. Click for source.

I think it’s inspiring that Paul’s doing these collaborations. I love how much he loves music! Like he told Rolling Stone in 2012, “If you’re enjoying it, why do something else?” For me, it’s a life goal to have a job that’s so fun that I just can’t quit it. Whether it’s my almost-husband, Bob Dylan, the Rolling Stones, Madonna, Stevie Nicks, or a relative youngster like Eminem, I’m a huge fan of people who are aging disgracefully. As Paul said in that 2012 interview: “You get the argument ‘Make way for the young kids … And you think, ‘Fuck that, let them make way for themselves. If they’re better than me, they’ll beat me.'” Damn straight! And I don’t care whether artists are declared “relevant” or not, as long as they’re showing me a good time at their shows, preferably with me in the front row. Of course, I’m a fan of young new artists too (check out my boy Hi-Rez, who is celebrating his 21st birthday) but being a kid doesn’t make you automatically relevant … not for long, anyway. As Stevie Nicks sang in “Landslide“:

Last year, Stevie told the New York Times that when she wrote that song, “I was 27, and I did already feel old in a lot of ways.” Hmmm. Rihanna will be 27 on February 20, and has a new album coming. This could be interesting!