Last night, I grabbed my concert friend Jessie and we hustled to the front row of the Gramercy Theatre to see country rapper Yelawolf. Yelawolf is having a hot moment with his song “Till It’s Gone,” which was used in the second episode of the seventh (and final season) of Sons of Anarchy.

I’ve seen Alabama-born Yelawolf twice before but this concert took place in much better circumstances. The first show, in Brooklyn in 2012, was disrupted by a massive nor’easter. The second time I saw Yela was when he opened for Eminem at a small G-Shock-hosted show in 2013. That audience seemed kind of corporate, and unfamiliar with Yelawolf, and stayed pretty quiet. The peeps at Gramercy Theatre knew damn well who he was and got rowdy. 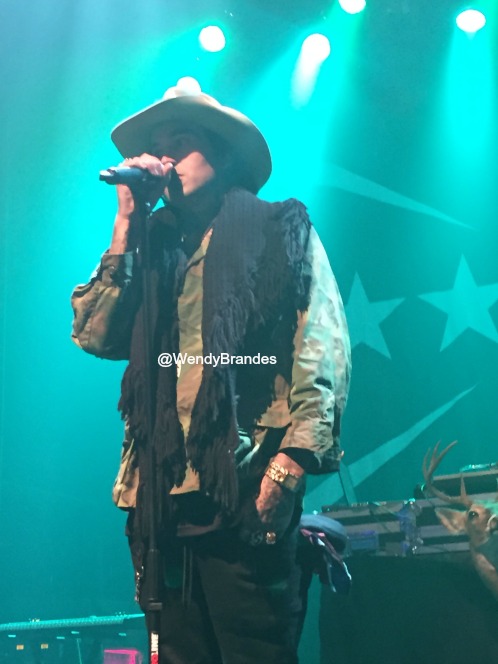 Yela up close and personal.

Jessie and I were glad to have the front-row fence to hang onto when people in back of us got pushy. The other advantage of being up front at a Yelawolf concert? You’ll get cooled down by the beer that he always throws into the crowd. That’s his thing, y’all. Don’t get too close if you’re uptight about a beer bath. This time, our position also gave us a good view of Yela’s three young children to the side of the stage, dancing around to songs like “I Wish” (with the lyrics “I wish a motherfucka would …”) and crystal-meth-mentioning “Billy Crystal.” Some dads’ jobs are more interesting than others. 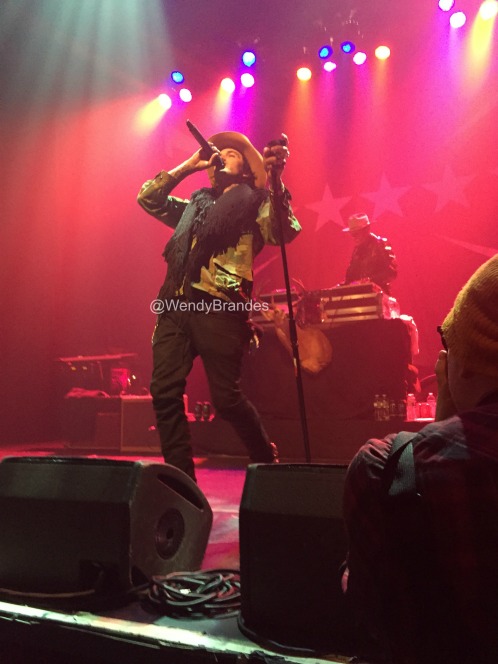 Putting his back into it.

My favorite thing about a Yelawolf concert is when he performs “Throw It Up,” which is the song he did with Eminem and — more importantly — my gorgeous rapper friend Gangsta Boo. I’m getting a little bitter that I’ve seen him perform three times with a recording of her vocals, and not Boo herself. I want to see Yela AND Boo live.

Speaking of Eminem, Yela spoke of him a lot. Yela is signed to Eminem’s Shady Records and is on the recently released Shady XV compilation album. He thanked Eminem for helping his career many times during the show, so if anyone is reporting back to Em, let him know sufficient gratitude has been expressed. Yelawolf did pull the stunt that every musician who has even shared an elevator with Eminem does: Point off-stage and say “Marshall Mathers!” like he’s going to come out. The entire audience was like, “Puh-leeze.” Yela said he guessed it was hard to fool New Yorkers, but audiences in other cities went wild. Again, puh-leeze.

The opening acts were both Southerners from Yela’s Slumerican music family. The main opener was Georgia-raised Rittz. He opened for Yela at the 2012 show and I missed his whole set because I was so delayed by the storm. He did come out and do one song with Yela during his set that time, and I liked that so much that I got his debut studio album, The Life and Times of Jonny Valiant, when it came out the following year. Now that I’ve seen Rittz’s full set, I loooooove him. I bought his new album, Next to Nothing, as soon as I got home. I happened to get my copy via iTunes, though Rittz urged the audience to get his album however they wanted, including illegal download “because I don’t make money from it anyway.” (That’s the truth for most non-megastar musicians these days and, really, that’s why you should pay for their work, you cheap assholes). I enjoyed Rittz’s personality and humor as much as his music. How can you not love a guy who put out a mixtape called White Jesus? I took this picture during what he called his “Beyonce moment,” with his hair being blown around by on-stage fans. 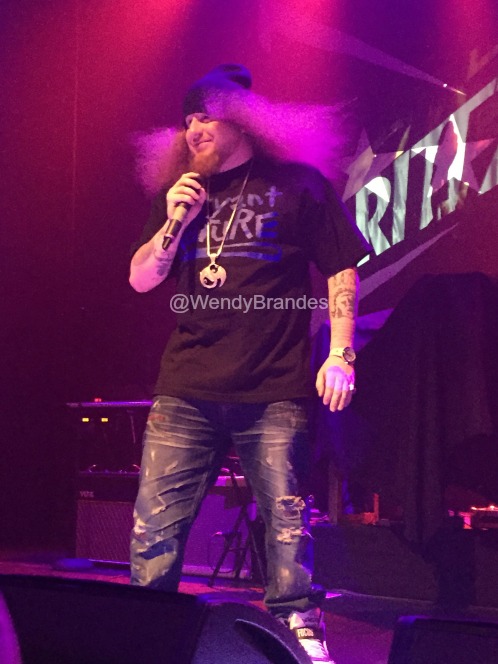 The difference between Rittz and Beyonce is that Rittz might be wearing his real hair here!

He had a great rapport in the audience. Everyone in the front row felt he looked right at them at some point — and he definitely gave the female twins who were front and center special attention. 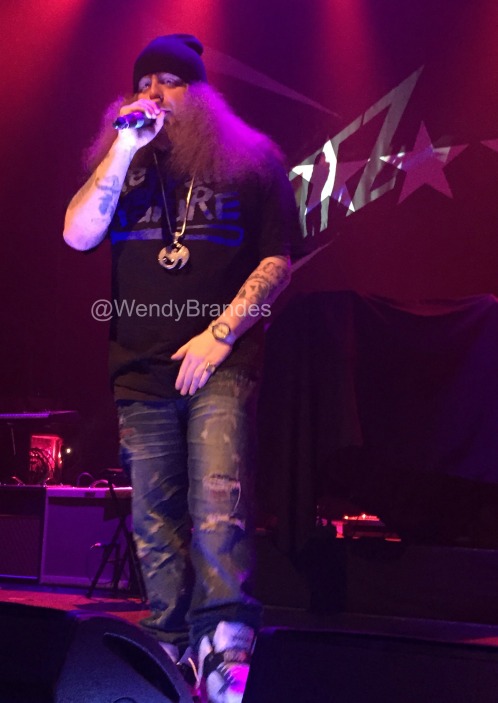 Are you looking at me, Rittz?

He also made sure everyone was safe, stopping his performance to single out a trouble-making guy who was then removed by security. Jessie and I took a look at the guy as he was hauled off and said to each other, “What’s with his hair?” The guy had this really big, straight, severe part in his short dark hair. Rittz then entertained us all with his comments about the part. He also did impressions of Guns N’ Roses, country singers, you name it.

Here’s a short clip of Rittz in action last night …

… and this is an deep interview with him that was published just a few weeks after the 2012 concert.

Rapper Big Henry — from Alabama, like Yelawolf — performed before Rittz. 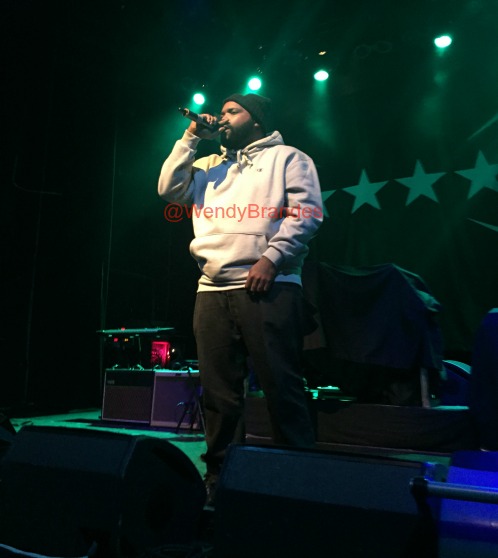 He was good; I’d see him again for sure.

All in all, a great evening. In between acts, I entertained music-obsessed Jessie with stories of concerts I went to BEFORE SHE WAS BORN. (I sent her this link after the show, and she said, “Wow, that’s what tickets used to look like!”) Too bad I forgot to take a picture of her; I’ve been meaning to do that to prove to that she exists. Next concert!

You might also like
Meeting My Accountant Today
Nuthin' But a "G" Ring
Coachella 2016: What Wendy (and Other People) Wore
« Jewel of the Month: NYC Taxi and Passenger “Maneater” Ring
RIP, Henry the Dog »