I’ve had this photo of Stevie Nicks saved to my computer desktop for about a year, just because it’s gorgeous. 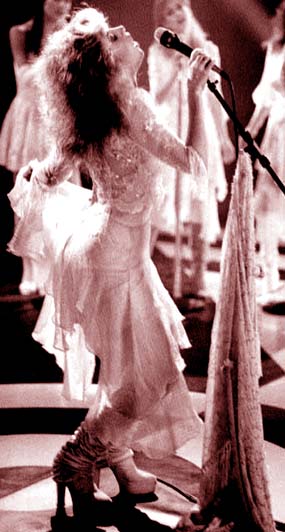 I’ve always loved Stevie’s voice, music and style. I glued myself to the TV when Fleetwood Mac’s “Gypsy” came on MTV in the early 1980s — taking occasional breaks to spin around the living room like Stevie.

I can’t imagine the number of times I watched her “White Winged Dove” solo concert film on HBO. The whole thing is on YouTube now.

Despite this, over the decades I never managed to get to a concert to see either Stevie solo or with Fleetwood Mac. This Monday, I finally made up for that. Not only did I see Fleetwood Mac at Madison Square Garden, but it was with its classic Rumours-era lineup — singer and keyboard player Christine McVie is touring with the band for the first time since 1998. MrB and I were running a little late to the show but thankfully came in right on time for “Rhiannon.” Imagine missing that one! I never would’ve gotten over it!

I’m glad that Stevie has retained her signature on-stage style of flowing black dress, shawls, boots, scarves and even a top hat. I feel strongly that artists (and non-artists!) who have a truly iconic look shouldn’t hesitate keep it forever. Why not? Who looks cooler than Stevie, either at 26 or now when she’s 66? Whenever she did an onstage twirl with all her chiffon floating around her, the Madison Square Garden audience went berserk. Interestingly, as I noted in a 2010 blog post, Stevie started out trying to emulate Janis Joplin’s style, even shopping at one of Janis’s favorite stores, the Velvet Underground. Yet she still developed a unique image. Stevie mentions the Velvet Underground (definitely the store, not the band ) in the first line of “Gypsy,” and I was excited to hear her describe what that store meant to her when she first went there with no money to spend.

My equivalent experience involved Bergdorf Goodman and a turquoise chubby that was possibly by Marc Jacobs. It took me about 10 years and required my taking a terrible but well-paid job at Lehman Brothers, but I eventually WAS able to shop at Bergdorf Goodman and the store still has that holy-grail aura for me. I just regret not having visualized a career as a rock singer when I saw that turquoise chubby. Stevie chose better when it came to wishing upon a store.

I didn’t wear anything from Bergdorf to the see Fleetwood Mac. For a Stevie-worthy handkerchief hem, vintage from Shrimpton Couture was a must. I even tried to give it a little twirl. 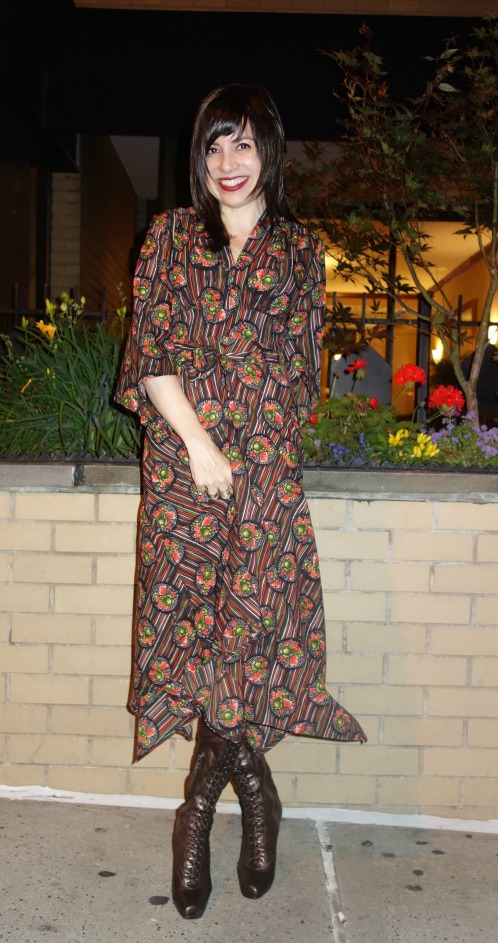 I didn’t expect to be fascinated by the rock-star style of another band member during the show, but Lindsey Buckingham was awe-inspiring. Not only does he play guitar like a fiend, but he’s as thin as a rail and was wearing the skinniest of skinny jeans. (If they’d been on a woman, you’d call them jeggings.) He turned 65 five days ago! Bad-ass! This photo is all washed out, but you can see what I mean about the jeans. 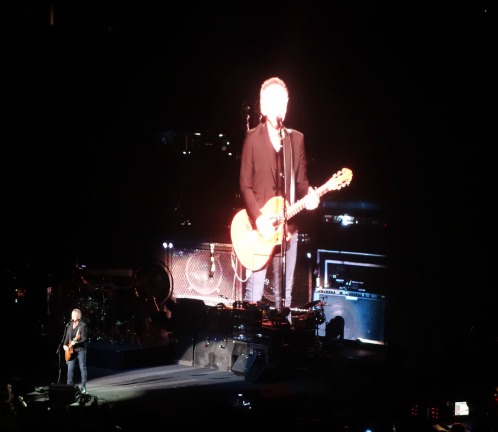 You can also seem him in my video of “Tusk.”

“Tusk” is a big favorite of mine. I once played it on repeat for a full hour-long workout at the gym. Nothing but “Tusk.” What can I say — I have a weakness for marching bands! Unfortunately, Fleetwood Mac couldn’t bring the USC Trojans on tour with them, but you can see a performance with the marching band here. And here’s the original 1979 video for the song, which made a huge impression on me in my youth. It pre-dated MTV, so I’m not sure where I first saw it, but to this day, whenever I hear the song, my mind’s eye sees Stevie twirling a baton and waving her hat.

You can see more of Stevie’s style here, and she’s all over Pinterest, of course. Stevie’s got a new album out: 24 Karat Gold – Songs From the Vault, and there are two biographies of her scheduled to come out next year. Those should be must-reads because Stevie is often outrageously quotable. I like this anecdote from the book Stevie Nicks: Visions, Dreams & Rumors by Zoe Howe, which was quoted in the New York Times this week. When Prince encouraged Stevie to write “more directly about sex in her lyrics,” she replied:

It takes a very special woman to tell Prince he’s not sexy!

If you’re in the New York area, Fleetwood Mac is playing at the Prudential Center in New Jersey this Saturday. There are still a few hundred tickets on StubHub. If you love this band, you don’t want to miss this tour.