While writing yesterday’s post about Fleetwood Mac, I delved into the band’s past, so I’ve got lots of recommended reading for you. Start with the band’s March 1977 Rolling Stone cover story. 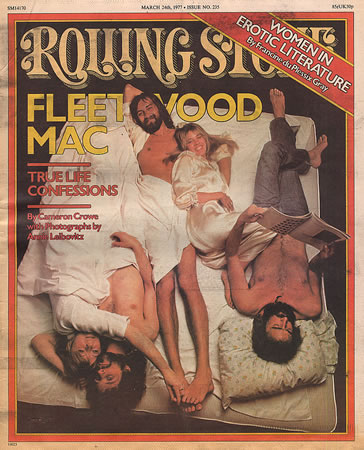 The band members were interviewed separately for the story by the then-19-year-old Cameron Crowe — the same Cameron Crowe who would eventually write and direct Almost Famous, about the adventures of a teenage music journalist. In the story, Christine McVie (I love that her pre-marriage name was Christine Perfect) goes over the history of the pre-Lindsey Buckingham/Stevie Nicks lineup of Fleetwood Mac, while everyone talks about the personal breakups that provided inspiration for the just-released Rumours album.  (I was intrigued to see that 28-year-old Stevie, who has often in subsequent years said that having children wasn’t compatible with her professional life, mused about the possibility of having a child before the age of 34. Also, John McVie had a big crush on Linda Ronstadt.) The previous fall, the work had been seen as what Crowe called a  “very late followup LP [to the previous hit album, 1975’s Fleetwood Mac], a trouble-child called Rumours.”  By the time the Rolling Stone article came out, Rumours was “being shipped out in greater quantities than any other record in the history of Warner Bros.,” Crowe reported. In fact, the album went on to be certified 19-times platinum in the U.S. (platinum status is one million copies sold) and, as of a couple of years ago, has sold more than 40 million copies worldwide. The album was reissued with additional tracks last year.

Thanks to the success of that “trouble-child” album, Fleetwood Mac topped Rolling Stone’s 1977 Readers Poll, landing the band back on the magazine’s cover in January 1978. Behold Mick Fleetwood’s cheerleader outfit. Nice legs, Mick! 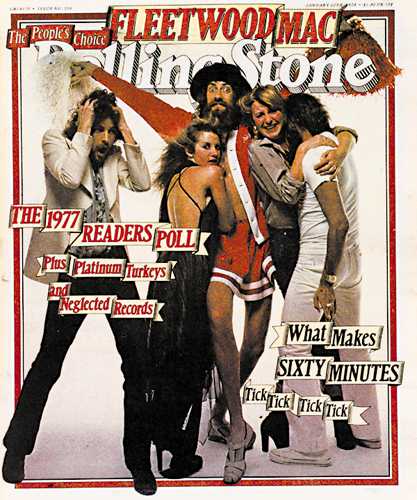 The 1977 Cameron Crowe cover story was titled “True Life Confessions,” but one thing the band didn’t confess to then was its rampant drug use.  That’s covered in this 2003 Uncut story by Nigel Williamson about the making of Rumours. “Throughout the Rumours sessions, a black velvet bag of cocaine held pride of place under the mixing desk,” Williamson wrote. And Stevie Nicks said,

“‘Gold Dust Woman’ was about how we all love the ritual of it, the little bottle, the diamond-studded spoons, the fabulous velvet bags.”

Continuing the habit of speaking to band members separately, Andy Greene interviewed Stevie and Lindsey that way for Rolling Stone in December 2012. Buckingham, laughing, said, “It’s almost like the old days where we were talking to each other through songs, and now we’re having conversations through you. It’s very strange, isn’t it?” This March, Greene spoke to Christine McVie about how she overcame her fear of flying  — a factor in her quitting the band in 1998 — to go back on tour. And in the Rolling Stone issue dated today, Rob Sheffield has a Q&A with Stevie in which she talked about the top hat that I was so pleased to see at the show on Monday.

“It’s a very special top hat — it’s from the 1920s, that one, and you can’t find another one like it. So the hat has its own roadie, its own box and its own cage — it’s always protected.”

Stevie also said that she advised Christine McVie to get a trainer before heading back on tour with the band. She actually told that story on stage at Madison Square Garden this Monday at a greater length, and I recorded it.

As MrB and I were leaving the Garden after the show, he said to me something like, “I guess Stevie and Christine still don’t get along.” I was totes like …

He somehow thought what Stevie said was a dig at Christine, while I thought it was warm and flattering. Well! I’ve discovered that I’m right and MrB is wrong (ha ha! I say that a lot) because Christine and Stevie have ALWAYS been close and supportive of each other. In a June 2013 profile by Jada Yuan, written before Christine returned to the band, Stevie said, “It’s not near as fun” [without Christine there]. “Because it was girl power, you know?” This January, after Christine expressed interest in returning to the band and even performed a song with them at a London show, Stevie spoke to Rolling Stone again about how it felt when Christine first retired: “We didn’t really want to have Fleetwood Mac without Chris. But we finally decided that we also didn’t want to not play.” And, about her return, Stevie said, “”When people say, ‘Did she ask if she could come back?’ It’s her band, for God’s sake. If she wants to come back, it’s her band. Fleetwood Mac-Vie. She started the damn band.”

My favorite article so far about the relationship between Stevie and Christine is this December 2013 piece by Tom Jonze for the Guardian. It noted that the night in September 2013 that Christine stepped on stage with the band, Stevie had earlier in the evening dedicated her song “Landslide” to Christine with the words, “This is for my mentor. Big sister. Best friend.” The story went on to say:

“It is not the first time Nicks has talked about McVie. In 2009, she told the audience at Wembley Arena that she thought about her ‘every day.’ Earlier this year she admitted to the Observer [the Guardian’s magazine]: ‘I’d beg, borrow and scrape together $5m and give it to her in cash if she would come back. That’s how much I miss her!'”

“I miss her like flowers need the rain,” Stevie said of Christine in that Observer story.

There you have it.

Here are a few other articles/videos you may find of interest:

Finally, one of my all-time favorite Buckingham-Nicks collaborations (and an all-time favorite song in general) wasn’t recorded with Fleetwood Mac. It’s former Kingston-Trio member John Stewart‘s 1979 hit “Gold.” It would be a good song anyway, but Stevie’s vocals make it a great one. Neither she nor Lindsey appear in this video, so Stewart’s awesome 1979 style takes center stage.

I WANT THOSE SUNGLASSES!

You might also like
'80s Hair Club for Musical Men
"Things Are Easy When You're Big in Japan"
Throwback Thursday: Yoko Ono With a Choker at Cannes
Previous Post: « What Wendy (and Stevie) Wore: Fleetwood Mac at MSG
Next Post: Microsoft’s Satya Nadella Speaks But Doesn’t Know »