Sixth-century B.C. Chinese philosopher Lao Tzu — the father of Taoism — said, “He who knows does not speak; he who speaks does not know.”

In a “you’re going to regret this for a loooooong time” moment, Satya Nadella, the chief executive of Microsoft, spoke without knowing at the Grace Hopper Celebration of Women in Computing conference in Phoenix yesterday.  He coughed up this awful advice for women who want raises: don’t ask for them. Here are his exact words as quoted by the New York Times:

“It’s not really about asking for the raise, but knowing and having faith that the system will actually give you the right raises as you go along,” Mr. Nadella said, according to a webcast of the event.

Here is my reaction, illustrated by Napoleon Dynamite: 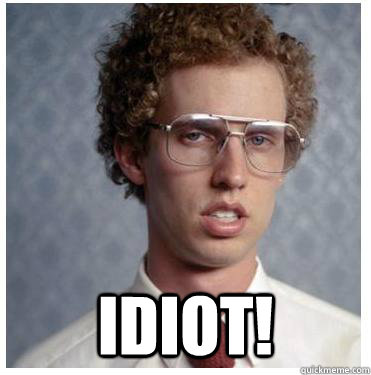 If it were true that not asking for a raise was the best way to make the big bucks, women would far out-earn men in the workplace, because women tend to be nice and polite and much less comfortable than men about asking for what they deserve. Or even what they don’t deserve! God knows you don’t have to deserve shit to ask for it! Starting with my first post-college job in 1989, one of the ways I’d steel myself to ask for money was by looking around me and observing what even the most incompetent men had the nerve to go after. If those fools were bold enough to ask for more money, why should I hold back when I was better than them? Yet, even with my being more assertive than the norm, I didn’t always get what I wanted. It must have been 1991 or so when I confronted my boss about a guy who was admittedly more experienced than I was, but who was hired after me and trained by me —  to the extent I was able to get him to learn anything. I’m not a miracle worker, you know. I still had to save this guy from his own mistakes all the time. Nevertheless, he was promoted ahead of me. I pointed out the injustice of this to my boss, who, unable to counter any of the points I made about talent, finally, weakly, said: “Well, he has a wife and kids.” Then he said, “I didn’t know you wanted that job so badly.” He didn’t know? The only way I could have made it more clear was by tattooing it on my forehead. I immediately started looking for another job — though I made sure I got that promotion before I left.

As for good karma … well, some definitions of karma involve how your past or current deeds will affect your NEXT life, so if you want money during this existence, I suggest you don’t wait for karma to sign your paycheck. What I tell women is: If you ask, you might get. You don’t ask, you definitely don’t get. If you act like you don’t care, no one is going to step in and care for you (at work or in any other matter). Take a lesson from what my boss said: “I didn’t know you wanted” it. That’s always a good reason for not giving an employee something.  Don’t take a lesson from the other thing my boss said about a wife and kids. Being married and having kids is only an advantage for a man who is perceived as being the breadwinner for his family (whether he is or not). Having a spouse and children will STILL be used against a woman, viewed as reasons she’s not sufficiently dedicated to her job. So, whether you’re asking for a starting salary at a new job, a raise or a bonus, don’t bring up your family, your cost of living, tuition, rent, medical bills, your Pekingese’s eye surgery or anything else of that nature. You deserve the money for the JOB THAT YOU DO. You don’t have to justify your worth in any other way (and besides, management will use all that personal stuff against you). You’re being paid for your work. If you think your work should be highly valued, then that’s your argument. You might feel uncomfortable making that argument, but that feeling lasts for the length of the conversation, while being underpaid can last your entire career.

As for Microsoft’s Nadella, he backtracked, of course, after Twitter came for him. First he tweeted that he’d been inarticulate and that the gender pay gap needed to be closed. Later, in an email to Microsoft employees, he said, “I answered that question completely wrong,” adding “If you think you deserve a raise, you should just ask.” I don’t know why he limited that concept to his own employees. Why not say that to the world if you really believe it?

Nadella’s original comment was made during a conversation with Microsoft board member Maria M. Klawe, the president of Harvey Mudd College. I was interested to see that even someone like Dr. Klawe felt she was less assertive than she should be when it comes to pay. Her comments, as relayed by the Times, were educational:

“When she was offered the position of dean of engineering at Princeton, Dr. Klawe said, she began discussing her salary only after accepting the job. The result, she estimated, was that she received about $50,000 less a year than she should have. Dr. Klawe said she had also handled her pay discussions with Harvey Mudd poorly, saying that she did not protest when she was offered less money than she thought appropriate.

‘Do not be as stupid as I was,’ she said, advising the audience to role-play with others before discussing compensation with potential employers.”

The role-playing is a good idea. When you do it, do what I do myself and what I always suggest to other women: Ask for what a man would ask for.  You’ll always wind up setting your sights higher. Sad but true!