MrB and I went to California on Labor Day weekend to visit family and friends. We stayed near the beach in Santa Monica and it was so beautiful, daytime … 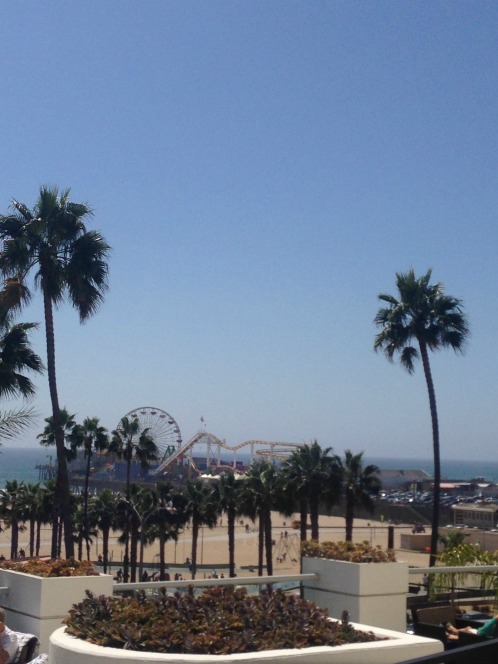 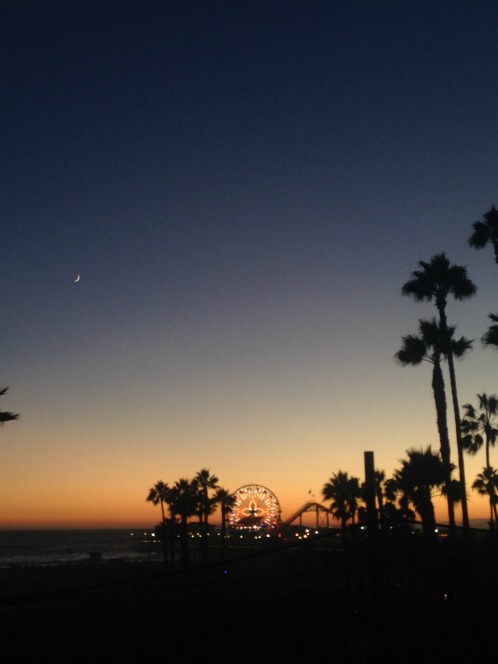 The buildings were pink, there wasn’t a cloud in the sky … 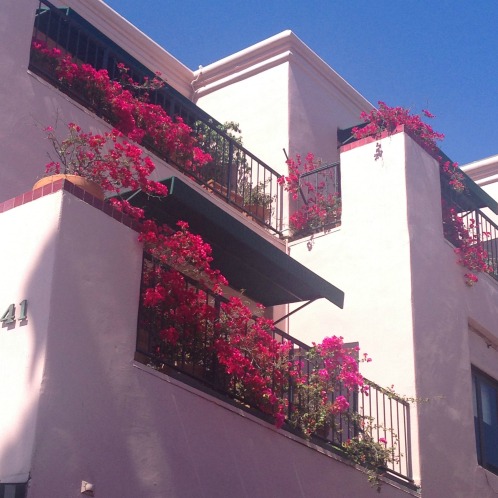 … and the Champagne sangria was delicious. 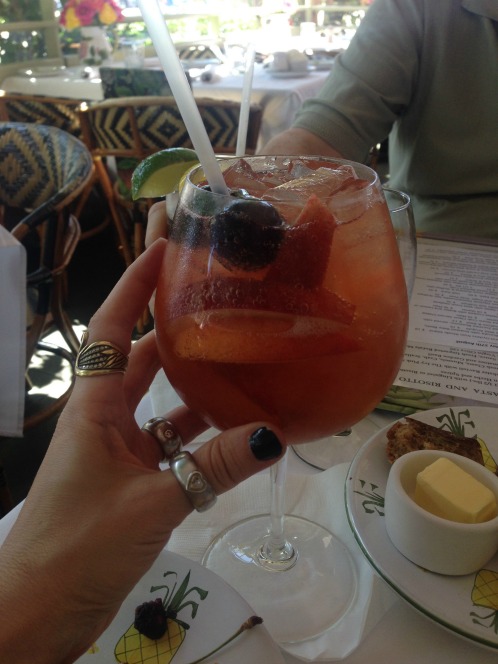 MrB and I had a good time on the Ferris wheel … 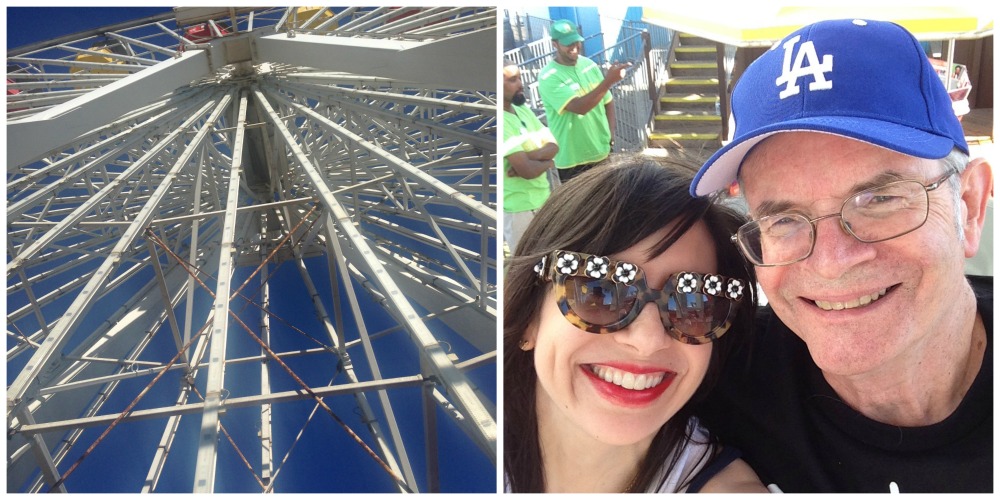 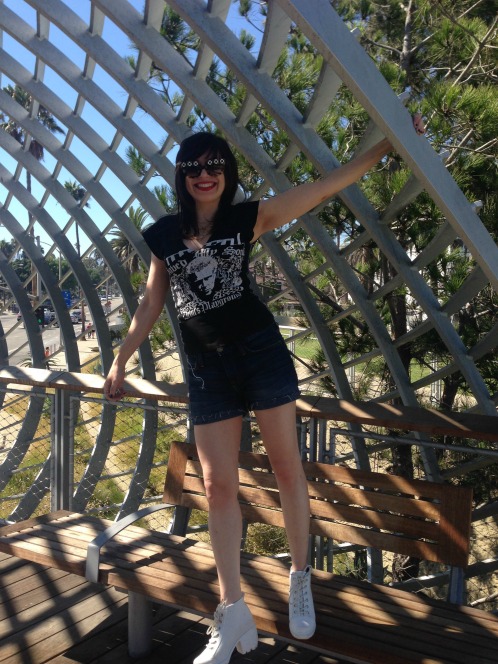 … and in the Pacific Ocean. 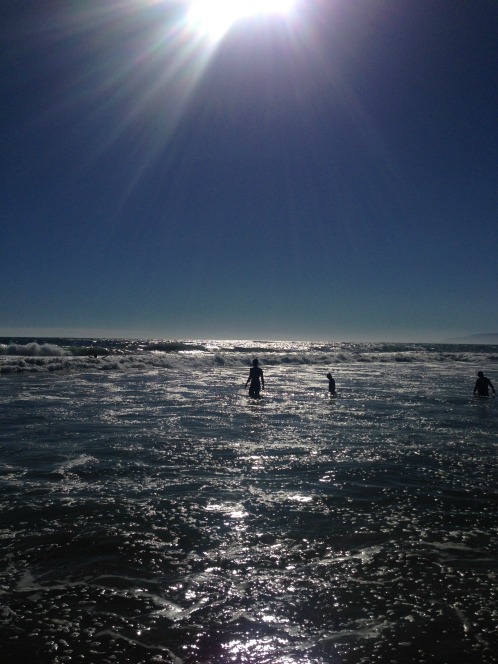 We caught up with my gorgeous friends Stef and Vyque. I’ve known Stef since 1999 when I hired her at People Magazine, and I’ve known Vyque quite a few years already thanks to her blog Fasshonaburu. 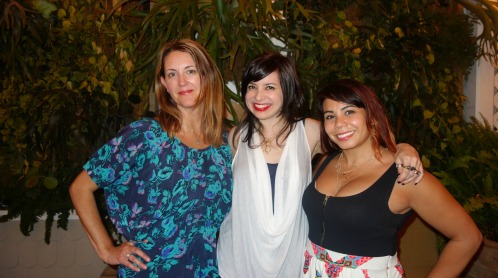 In size order, from left: Stef, me and Vyque.

We also drove to the Valley to hang out with legendary rapper Gangsta Boo and her musician boyfriend, Sozay. Sozay gave MrB a t-shirt that made him feel totally gangsta. 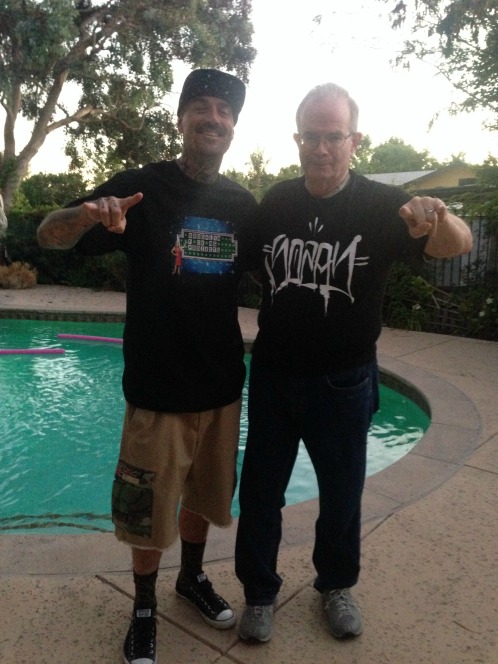 I always have a good time with Boo!

Right near where we were staying, in the Brentwood Country Mart, is Broken English Jewelry, which carries my jewelry line. I stopped in to take a look at some of my pieces there. Pantone has declared aquamarine to be the #1 color for women for Spring 2015, so it was a good time to take a few photos of my one-of-a-kind, 18K-gold-and-aquamarine Livia poison ring. 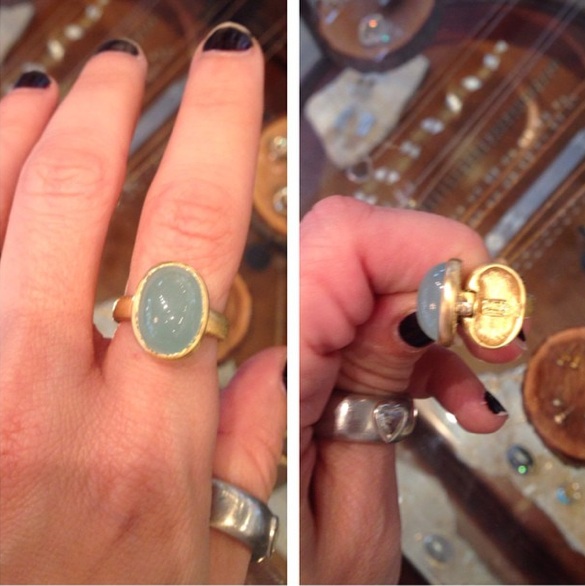 The ring is shown closed on the left and open on the right. Only one has been made and it’s on sale! Click for price information.

Before we went home, we drove to Hollywood … 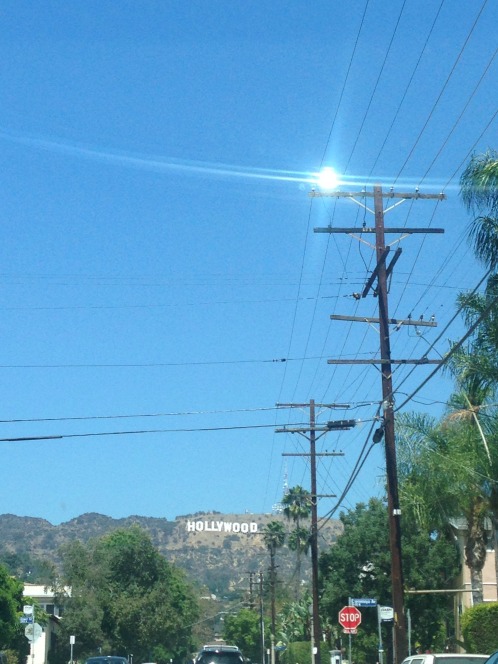 … to have our traditional brunch with the L.A.-based portion of the family: MrB’s two eldest daughters, two grandsons, one son-in-law, and one first wife. This time we also enjoyed the company of MrB’s son, who flew out from Chicago. Basically, we were only missing one daughter and one second wife. MrB presented Wife #1 with a nice bottle of Irish whiskey because it would have been their 50th wedding anniversary … if they were still married! Wife #3 (me) took celebratory photos. We have a very civilized extended family. Later, I wore a large plastic spider as a hat, courtesy of my eldest grandson. 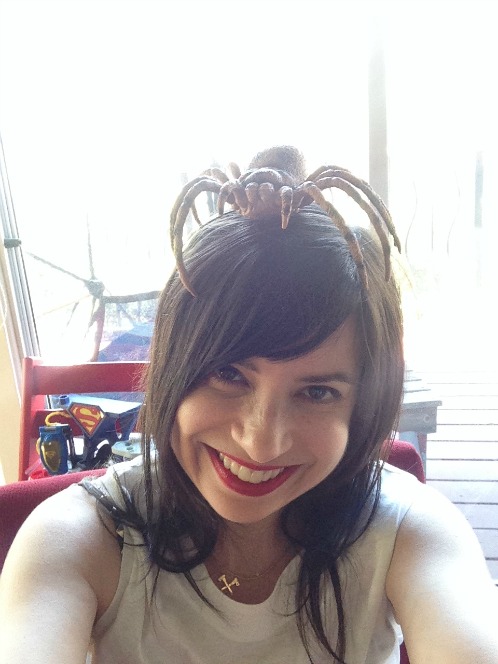 It looks scarily real, doesn’t it?

That day, I was wearing a t-shirt that I had been dubious about. 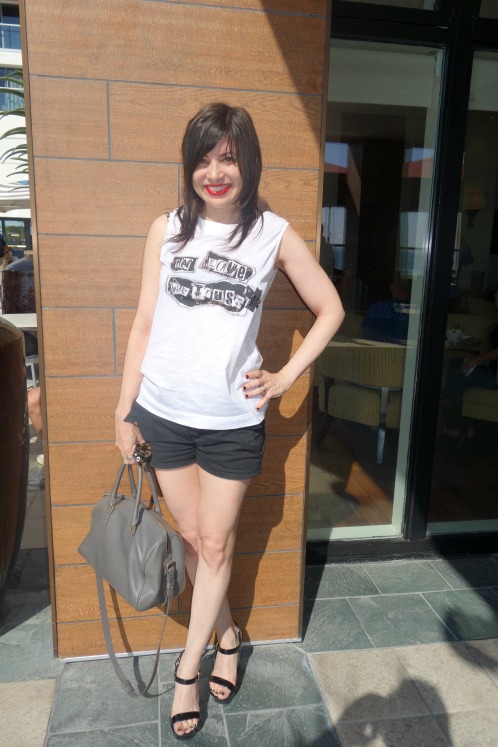 I got the top because it has safety pins on it and, thanks to my love for punk music and fashion, I have an enduring passion for safety pins as decoration. 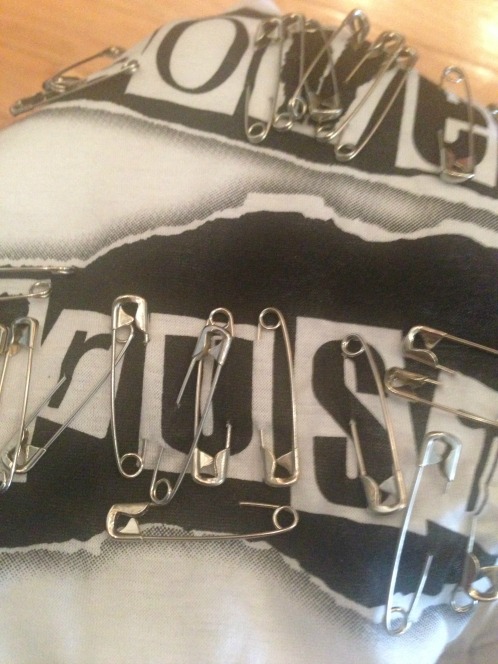 A closer look at the pins.

When I bought the shirt, I was so excited about the pins that I barely registered that the lettering behind them says, “In Love We Trust.” Ugh! I am not about the word “love” in fashion or jewelry.  Hearts are fine with me, because they can be made visually interesting, but writing out “love”  makes me think of those script nameplate necklaces that read “Love” and “Breathe” and “Faith.” Those are everywhere; you can get them from any Chinese jewelry manufacturer at any price. So unimaginative! When it comes to word necklaces I prefer funny, edgy concepts like IDGAF, TWERK, BOSSY and NINJA. But, seeing as I was stuck with the shirt, I chopped off the short sleeves and finally wore it.  I was gratified when my son-in-law said, “Cool safety pins.” He didn’t notice the text either!

Speaking of safety pins, one of the first pieces I wanted to create when I started designing jewelry in 2005 was a gold and diamond safety pin. While I was playing around with my idea, I decided that so many people had already done safety-pin jewelry that I was “too late.” Since that time, I’d say hundreds, if not thousands, of new safety-pin designs have come out. I learned a lesson there. Trends can last a decade and some jewelry themes — snakes, for instance — are eternal. Even the expression “There is nothing new under the sun” is ancient! (It’s been around since Old Testament times.) Now I go where my inspiration takes me and trust that my interpretation of a theme is what will make my version special. Hmmm. Now that I think of it, even the “Love” necklace concept could be Wendy-ized. Stay tuned!