I have not yet been to 9/11 Memorial Museum, but acquaintances who have gone photographed a display that tells the story of the Wall Street Journal’s Sept. 12, 2001, issue. 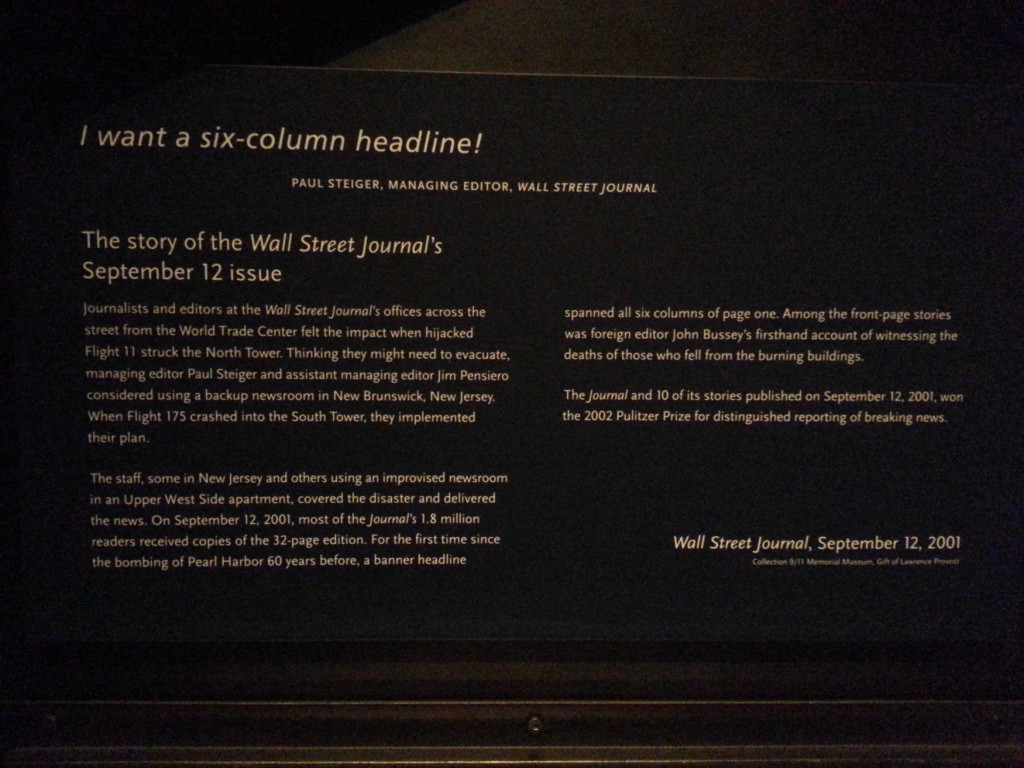 That quote across the top — “I want a six-column headline!” — is from MrB. He was the managing editor of the Wall Street Journal from 1991 to 2007. In 2001, the paper’s offices were in the World Financial Center, across the street from the World Trade Center. I was in a different part of the World Financial Center, working for Lehman Brothers. When I heard a tremendous explosion at 8:46 a.m. on September 11, I ran to a window and saw debris falling down, but I couldn’t make out what had happened. As I’ve written before, I hurried back to my desk and started sending emails, locating my employees, and checking CNN online. I also called MrB and asked, “What was that explosion at the World Trade Center?”, hoping that his journalists would already have the answer. MrB asked, “What explosion?” I said, “The one that shook this whole building! I think you better go look out the window!” and hung up to continue searching for news. Reports that a plane had hit the World Trade Center’s North Tower started popping up on the web. At first, there was speculation that it was an accident, but then, at 9:03 a.m., the second plane struck the South Tower.  I called MrB again while I tried to get my few employees organized to leave the building. He and I agreed to meet between our buildings, but when I walked outside, I was blocked from going towards our meeting spot. I didn’t have a cell phone then, and, even if I had, cell phones weren’t working. I had a working (non-phone-enabled) BlackBerry, but MrB didn’t have one, so that was it for communicating with him.

Instead, I emailed with a colleague in London, who was watching the news on the BBC. He told me about the attack on the Pentagon and advised me to head uptown quickly. Thanks to him, my group was safely away when the first tower came down. I said nervously to the people around me, “I’m sure MrB is okay. We left at the same time and we’re okay, so he must be okay too.” I figured he would have been heading north, away from the WTC, like us.  I didn’t realize he had been forced to exit south. The Trade Center and surrounding buildings were on the tip of Manhattan, right next to the water, so there was no way for MrB and thousands of other people to put any distance between themselves and the catastrophe. The choking dust and debris from the collapsing buildings rained down upon them. MrB covered his mouth and nose with his tie. Later, he said:

“I remember saying to myself, ‘You don’t die of smoke inhalation in the open air’ … It’s not always true, I knew, but it was a nice thing to tell myself at the time.”

I made it to my friend Kevin’s apartment and used his home phone to leave messages for MrB. Eventually, MrB, who’d gotten home by foot and bus, called me back. I’d been fairly calm till then, but as soon as I heard MrB’s voice, I bawled, “I CAN’T FIND RANDI!” Before I left the World Financial Center, I had darted back and forth between my office and my employee Randi’s desk several times, but I didn’t see her. I called her extension and got no answer. I thought she might have left ahead of me, so I went to the lobby to meet my other people, but I kept worrying. When I got to Kevin’s apartment, I tried to call Randi at home, but I didn’t have her number, and when I called information, it turned out she was unlisted. MrB told me he’d take care of everything and he did, calling 411 and telling the operator that during a national emergency, she simply had to give him the unlisted number. She did and then we all took turns calling Randi’s home answering machine to enjoy her outgoing message, recorded in her fabulous New Yawk accent: “Randi and Ross are safe from the explosion.”

It’s still amazing to me that MrB took the time to do this while helping to coordinate the Wall Street Journal’s Pulitzer-Prize-winning next-day coverage of the terrorist attack. Thank you, MrB. You’re my hero. 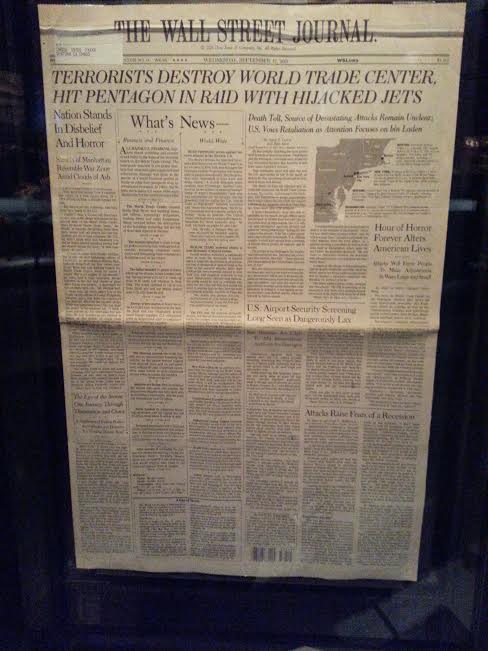 The 9/11 Memorial displays the paper with the six-column headline.

To fully understand the huge effort the paper’s staff put in to cover the the news after having to abandon the New York office, read this 2011 story by Roy J. Harris Jr.:

“How The Wall Street Journal’s improvised 9/11 battle plan helped it to a Pulitzer.”

And, as I’ve mentioned before, one of the standout stories in the September 12 issue was written by John Bussey, who was still in the Journal’s office when the Twin Towers came down:

“The Eye of the Storm: One Journey Through Desperation and Chaos“
For further reading, here are my previous September 11 posts, from oldest to newest.

You might also like
Fourth Blogversary
Throwback Thursday: 1 Wedding, 1 Anniversary
Three Old Posts and a Little Story
Previous Post: « Slut-Shaming and Women-Blaming at People Magazine
Next Post: Zang Toi, Jill Abramson, and the Jewel of the Month »