Zang Toi’s Spring 2015 runway show this week reminded me that I had an outfit photo with a Zang dress that I’ve been meaning to post since May! 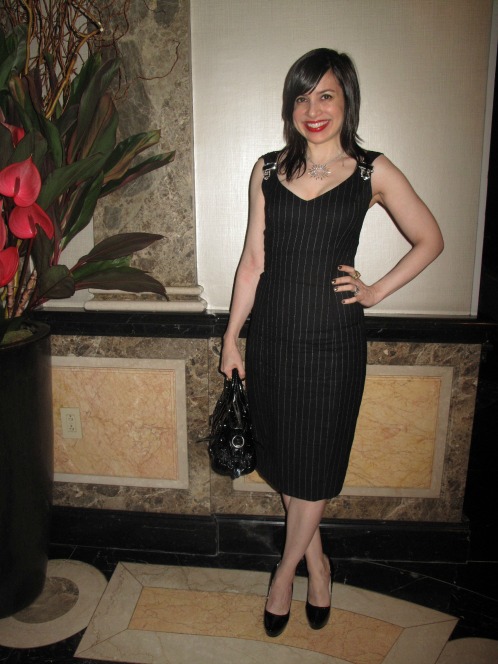 I’d have to ask Zang exactly what season this dress is from, but I probably got it in 2007, seeing as the first photo I have of it is from September of that year.

I wore it to a dinner for Reporters Committee for Freedom of the Press. RCFP provides free legal assistance to journalists. 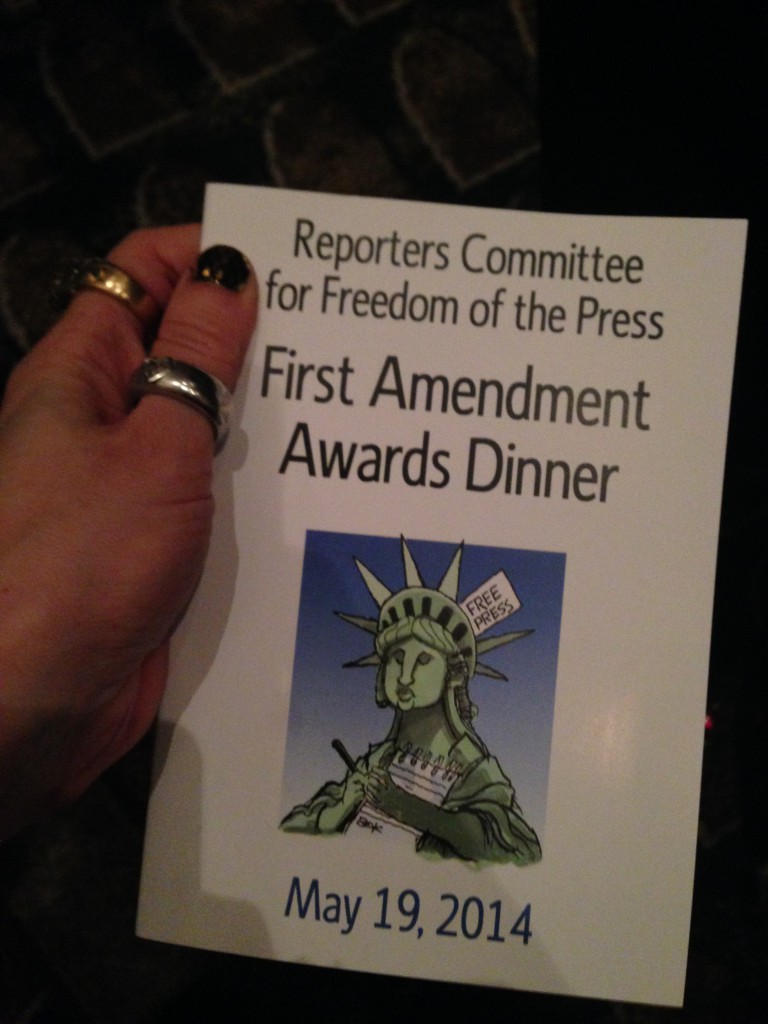 The dinner took place five days after the controversial firing of New York Times executive editor Jill Abramson — the first woman to hold that job at the paper.  One of the dinner honorees happened to be New York Times publisher Arthur Sulzberger. (Note: MrB and I know both Jill and Arthur.) 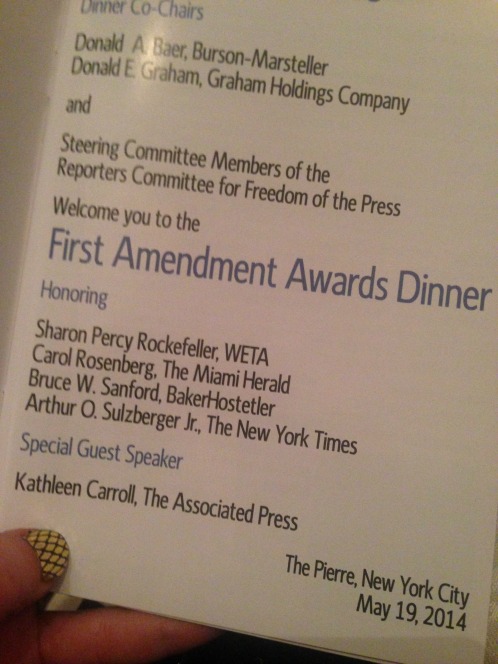 The dinner attendees were quite titillated by this, but, while Arthur praised Jill as a “powerful and outspoken advocate for a free press,” he didn’t say anything specific about recent events in his speech. (Looking back through my email from that night, I see that I emailed myself that short quote from Arthur just a few minutes after emailing a friend at a noisy nearby table, “Tell your table to be quiet! You’re like the bad kids in the back of the classroom!!” My friend replied, “They’re all lawyers, what do you expect.”)

Ten days later, both Jill and Arthur attended the Pulitzer Prize lunch. MrB — who was a member of the Pulitzer board from 1999 to 2007, and the chairman of the board in his final year — accompanied Jill. After, he told me that a photographer had corralled him, Jill, Arthur and Stephen Adler of Reuters for the journalism equivalent of an awkward family photo. It wasn’t released to the Columbia Journalism Review until about a month later. 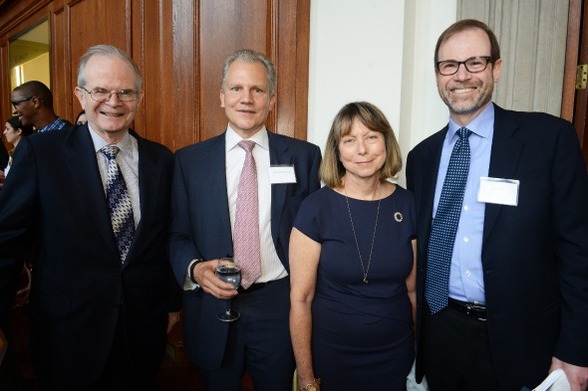 “On May 28, Columbia University photographer Eileen Barroso captured a historic, if uncomfortable New York Times moment at the Pulitzer Prize luncheon: the last portrait of former Executive Editor Jill Abramson and Publisher Arthur Sulzberger, Jr. in public together for what will likely be a long time.”

Speaking of Jill, I wrote in May that her experience gave me the inspiration for a new word necklace: PUSHY. I did indeed follow through on that and sent Jill a gold-plated silver necklace as a gift. I was very excited when she emailed me last week to tell me she had worn the necklace for a video interview she did at Re/code‘s Code/Media New York event.  On Re/code’s site, the introduction to Jill’s interview reads:

“Jill Abramson says she can’t explain, precisely, why she was fired from the New York Times’ top editing job in May. But she’s happy to talk about it.

And she’s happy to wink at her situation as well, by showing up to an interview with Re/code’s Kara Swisher wearing a necklace with charms that spell out ‘Pushy.'”

Woot! Here’s a screen cap that shows the necklace. 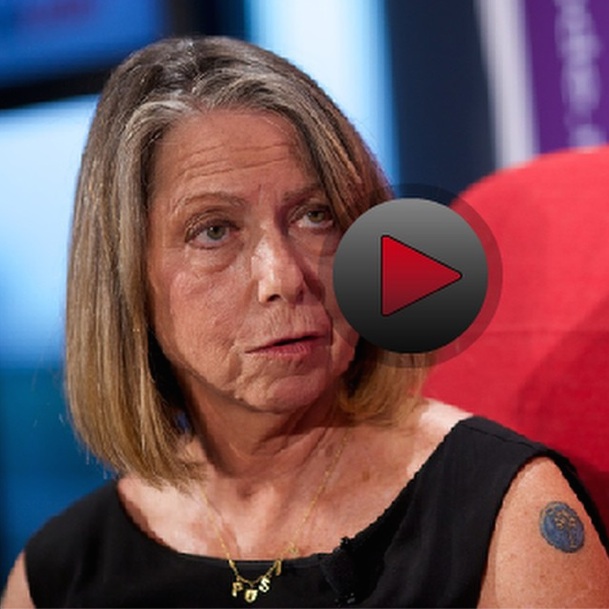 Despite that Play button the video isn’t embedded, but you can click the screen cap to see the full interview.

Jill had a very interesting conversation with Kara (I also know Kara; in fact, I once tumbled through a hole in the floor of her under-renovation house). I recommend you watch it all 35 minutes of the interview. Jill’s just a cool, smart, groundbreaking, badass lady. And I love that she’s flaunting her tats in the sleeveless dress she wore.

I figure this makes it the right time for the PUSHY necklace to be my Jewel of the Month. The piece is made to order and available in silver … 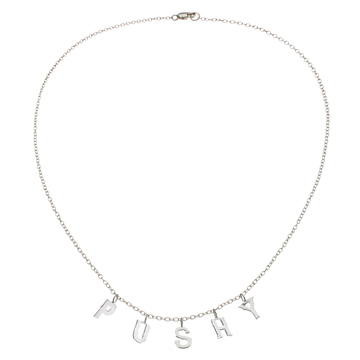 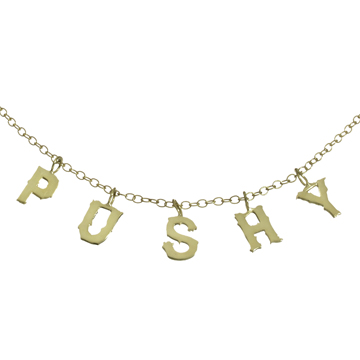 Here’s how the gold version looks on my gorgeous right-hand woman Eryn. 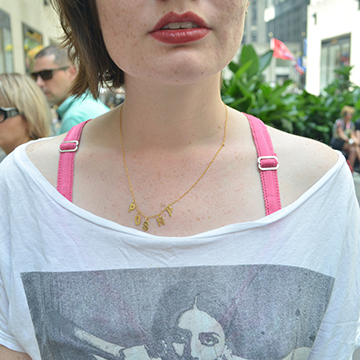 If you’re a badass woman but PUSHY isn’t your thing, you might be interested in May’s Jewels of the Months: my BOSS and BOSSY necklaces. I also do custom word necklaces, so if you don’t find what you want among the 22 (and counting!) word necklace styles on my website, holla at me at wbjewelry at hotmail dot com with your request.

On May 28, Columbia University photographer Eileen Barroso captured a historic, if uncomfortable New York Times moment at the Pulitzer Prize luncheon: the last portrait of former Executive Editor Jill Abramson and Publisher Arthur Sulzberger, Jr. in public together for what will likely be a long time. – See more at: http://www.cjr.org/the_kicker/a_tense_reunion.php#sthash.5jqdKBxL.dpuf
You might also like
Jewel of the Month: Hockey Mask and Chainsaw Emoji Earrings
Dressing Up for Robin Hood
London, Day 5: Out of Town
Previous Post: « September 11: The Thirteenth Anniversary
Next Post: The Week in Review »