It’s Earth Day today! In honor of the occasion — and ahead of World Oceans Day on June 8 — the Los Angeles Times did a feature on jewelry inspired by sea life. My 18K yellow gold turtle locket is included! 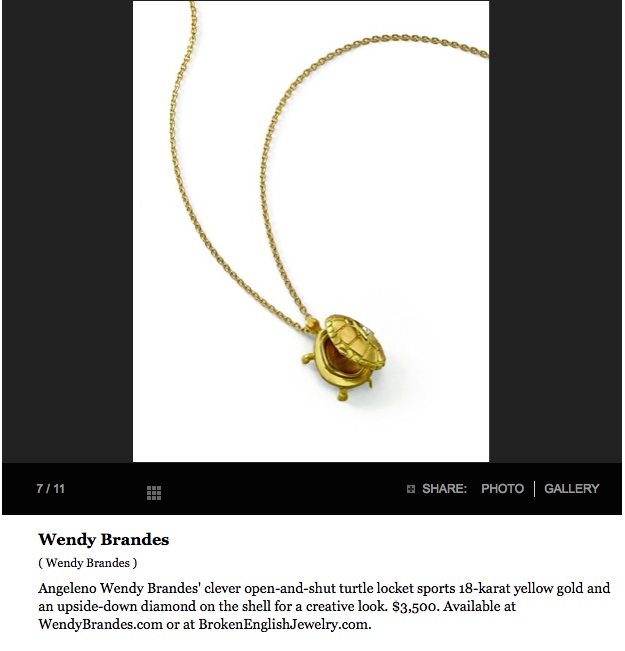 I’m amused that I’m called an Angeleno in that caption. People who see my jewelry before they meet me tend to think that. I think it’s because of the line’s casual-luxe vibe. My designs have always done quite well in L.A., so I’m pleased to be an honorary citizen.

There are two turtle necklaces left. I have one on my website. Well, I called it a tortoise there but I also refer to it as a turtle when I’m talking to people about it. You can call it what you like — in fact, you can skip categorizing it at all and just name it Churchy La Femme. That’s a good turtle name. 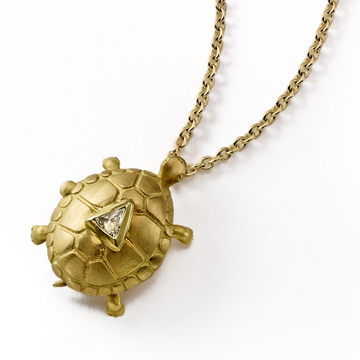 Also, if you’re a real Angeleno, you can try on the other turtle locket in person by going to Broken English at the Brentwood Country Mart in Santa Monica. The turtle, which has an upside-down diamond set in its shell, is priced at $3,500. I’m delighted to report that that’s a bargain compared to some of the options in the L.A. Times gallery. I don’t get to say that very often!

After these two turtles are sold, I won’t be making any others, so if you love turtles (or tortoises) get one before it’s too late.

I feel very strongly about sea creatures, even though I’m scared of a lot of them. Jaws traumatized me at a young age, plus, much later, a friend of mine nearly lost a leg to barracudas. And there’s something about sea urchins. I don’t trust them. I know they don’t swim around biting people, but they make me nervous anyway. Despite all that, I want all sea creatures to have a good, clean ocean to live in. I’ve been looking for the right ocean-loving organization to support, and I think it might be Oceana. Let me know if you have any experience with Oceana or any other ocean-related group.