Everywhere I look, I find examples of my “Never is the next new thing™” observation. People switch from “loathe” to “love” so quickly!

Last Thursday, the Wall Street Journal had a story on the latest comeback of the miniskirt, citing its representation in the fall collections of Hedi Slimane for Saint Laurent; Giambattista Valli; Raf Simons for Dior; Isabel Marant; Frida Giannini for Gucci; and Nicolas Ghesquière for his debut at Louis Vuitton. The last paragraph — about how the mini started reappearing in 2013 after several years of longer hemlines — caught my eye.

“The pendulum began to swing the other way about a year ago when Mr. Slimane put miniskirts and short baby doll dresses on Saint Laurent’s runway in March 2013. They looked so short that critics shrugged and predicted they would never sell. A few months later, the dresses could be seen disappearing into the dressing rooms at the trend-forward boutique Maxfield in Los Angeles.”

Oh, those shrugging critics! They never know what’s coming down the line, do they? Well, they might be right about me. I’m not sure I’ll have to do any skirt buying because, as you can see from the outfit I posted the day before the Wall Street Journal story ran in print, I’m already well-supplied with fall-appropriate minis. 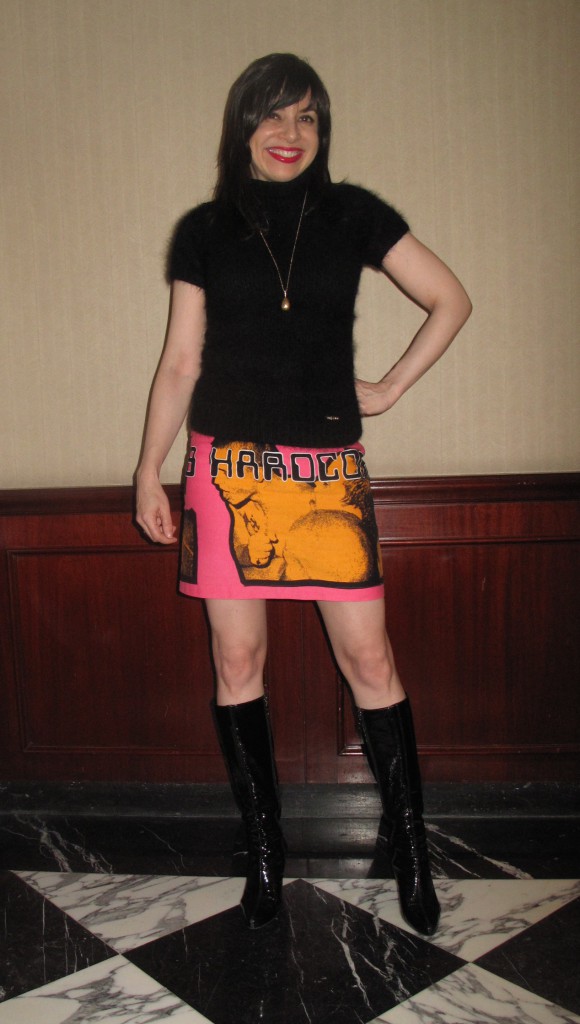 I spotted another “Never is the next new thing™” anecdote in a New York Times story last Friday. The article, which was reporting on an exhibit at the J. Paul Getty Museum in Los Angeles, was about how Queen Victoria was quick to hop on the new technology of photography in the 19th century. The story said:

“Fame may seem a 20th-century phenomenon, but Queen Victoria was the first public figure to exploit its promotional potential and the earliest — and least likely — international celebrity of the photographed world.”

The “Never is the next new thing™” paragraph dealt with Victoria’s behavior after her husband, Prince Albert, died in 1861 at age 41.

“A year after Albert died, Victoria had [William] Bambridge photograph her in mourning poses, dressed in black, standing next to monumental statues, either alone or with her children. When she released the first public ‘mourning picture,’ the press declared it beneath her dignity. Yet it started a trend; throughout England, bereaved men and women had their own mourning pictures made.”

Is the Victorian mourning picture the ancestor of the funeral selfie? Perhaps!

It’s amusing to me that the Victorian press was horrified by these photos initially, considering this was the era of mourning jewelry woven from the hair of the deceased, a concept that many people nowadays find revolting. I’m not one of those people. My acorn and squirrel necklace was directly inspired by hair jewelry. When another company knocked off my design and tried to deny it initially, I asked, “Oh really? So where did you get the idea for that particular woven look?” The company representative had no answer for that. I eventually got a tiny percentage of their revenue from their acorn sales to compensate me. See? It pays to know your history.

The Getty exhibit called “A Royal Passion: Queen Victoria and Photography” runs through June 8. Don’t forget to take a museum selfie if you go!