In my paean to Elizabeth Taylor’s relationship with jewelry, written after the star’s death in 2011, I mentioned that celebrities today are sometimes paid to wear jewelry, unlike Dame Elizabeth, who owned her own diamonds.

March’s Vanity Fair — the Hollywood issue — has more information on the price of red-carpet representation. Here is a passage from the Vanessa Grigoriadis story on stylists called “Slaves of the Red Carpet”: 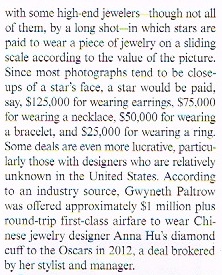 In other words, don’t expect to see any Wendy Brandes jewelry right outside the Dolby Theatre (formerly the Kodak Theatre) before the Oscars this Sunday night!

After that, it was reassuring to read in the New York Times yesterday that jewelry designers who are smaller but relatively high-profile also see themselves at a disadvantage compared to establishment jewelers such as Cartier, Bulgari, and Van Cleef & Arpels. In any business, it’s always tempting to look at what someone else has and think, “They have it made.” In reality, that person — who could be the client of a top-notch publicist, or the winner of a CFDA award (fashion’s Oscars), or heavily promoted by Barneys for a decade — still can’t write the fat check that would guarantee visibility.  Even designer Jennifer Meyer, the daughter of NBCUniversal vice chairman Ron Meyer and wife of actor Tobey Maguire, can’t compete that way. The Times quoted her:

Without the ability to commit a philanthropic act in order to convince an actress to wear a necklace or earrings (does that kind of demand seem to fly in the face of the concept of charity, or what?), Meyer “takes a more circuitous route, forging ‘girlfriend’ relationships with a handful of power stylists,” the Times said.

Of course, some girlfriends are better than others. Designer Irene Neuwirth said that one top stylist recently asked to be given a $40,000 piece of jewelry. I don’t know what’s funnier: the stylist asking for something that extravagant from Neuwirth, or the B-list celebrity who asked me for a piece worth a mere — comparatively speaking! — $750. One was aiming for the moon, the other was saying, “I’m not opening my wallet for anything.”  The latter reminded me of my friend, “Mrs. Moneybanks,” whom I wrote about here:

“Years ago, my wealthy American friend — let’s call her Mrs. Moneybanks — suggested a tricky way I could save money on a purchase and, to encourage me, said, ‘That’s what I would do!’ I said, ‘But Mrs. Moneybanks! You wouldn’t have to do that. You’re rich!’ She retorted, ‘How do you think I got so rich?'”

You can read the whole New York Times story here. If the direct link doesn’t work for you because you don’t have a subscription, try getting in the “side door” by searching for “boldface gems for oscar night.”

You might also like
I Can See Clearly Now
Get Smart (About Manufacturing)
Jewel of the Month: Queen Min Earrings
Previous Post: « Throwback Thursday: Eurythmics and Courtney Love
Next Post: What Wendy Wore: Zang Toi for a Pre-Oscar Party »