Fashion at the Grammys is so much more interesting than at the acting-oriented awards shows. Personal style is part of the package for musicians. They don’t have to be “pretty” or “appropriate.” They only need to make a statement about themselves — the more distinctive, the better.

This means, naturally, that my Best Dressed/Wear What You Want combo award for the night goes to Pharrell Williams and the big ole hat by Vivienne Westwood* that quickly got its own Twitter account. (A rival Twitter is this one.) 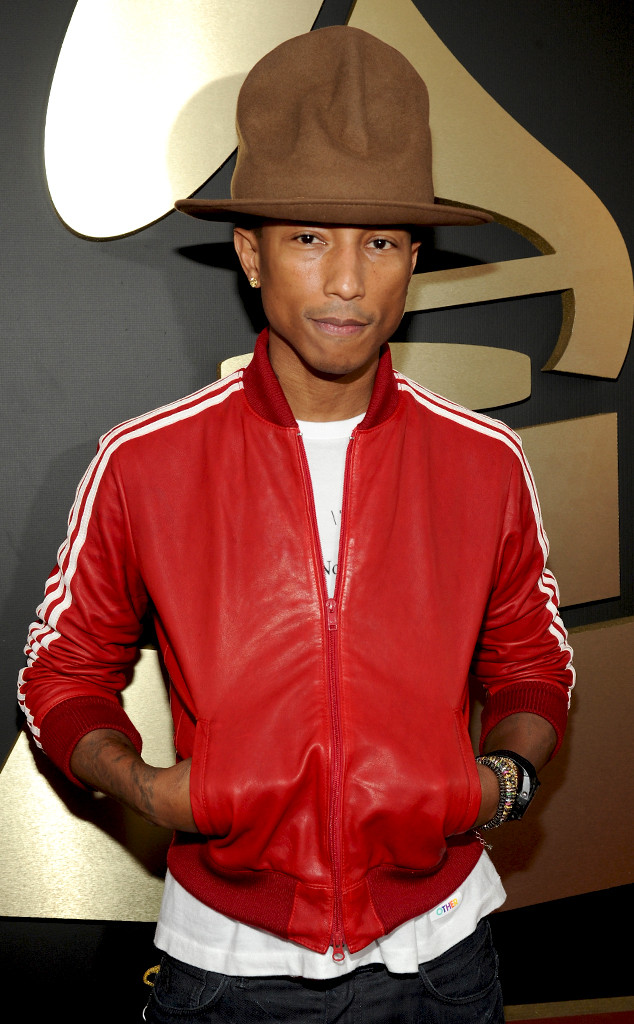 The hat was the hot topic of the night and, in my opinion, that makes you a fashion success at the Grammys. The hat was compared to hats worn by Canadian Mounties and Smokey the Bear, as well as the logo for roast-beef-sandwich chain Arby’s.

That was funny, but Pharrell KILLED when he replied:

Speaking of dudes with interesting headgear, I have to give props to Pharrell’s “Get Lucky” collaborators — the robot men of Daft Punk. They wore their signature helmets in black … 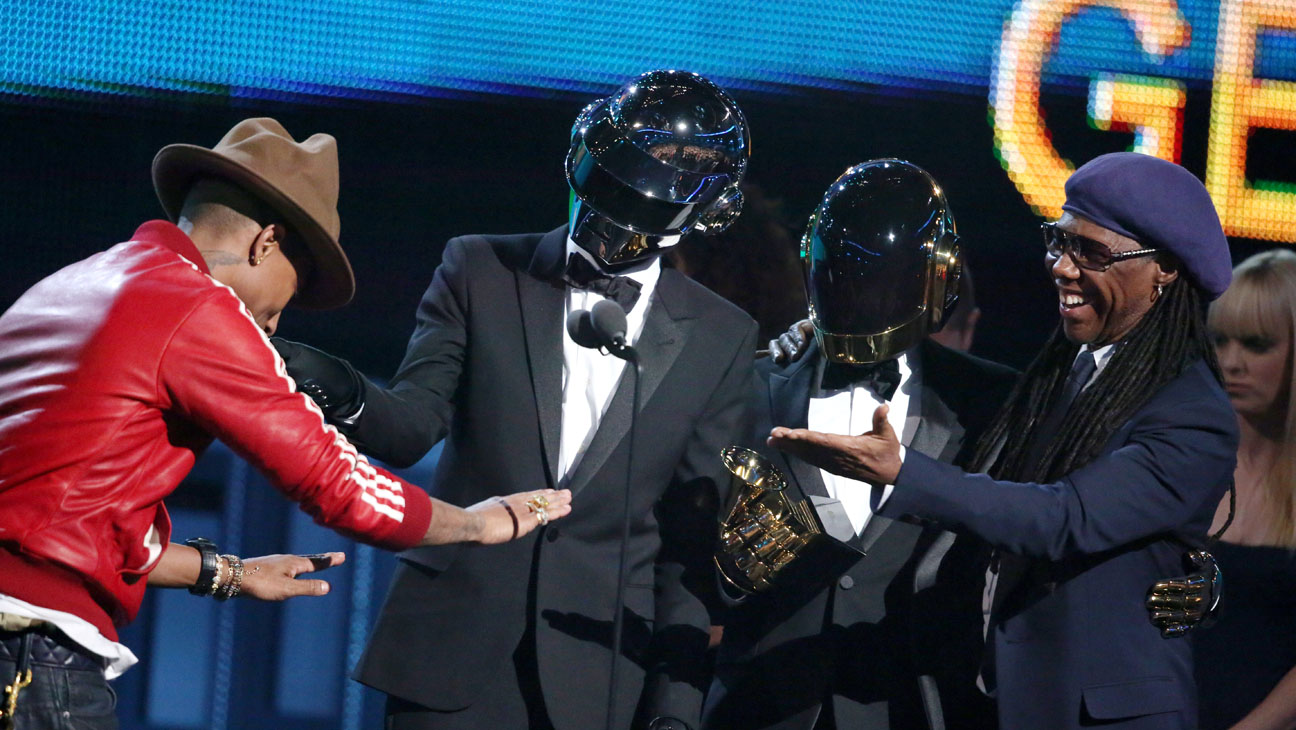 Pharrell and Nile Rodgers with Daft Punk. Click for source. 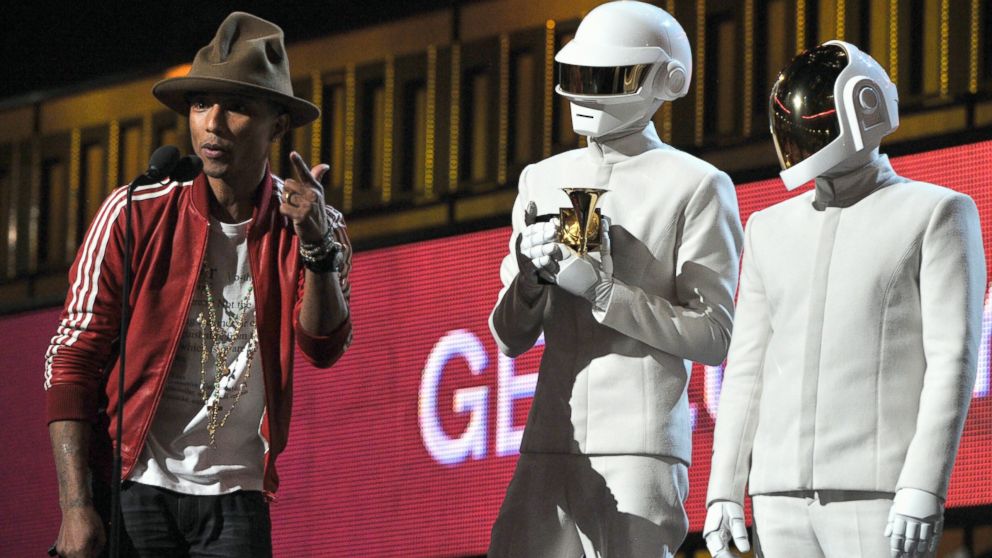 I wholeheartedly approve of their commitment to the helmets on stage. (To see the French duo of Thomas Bangalter and Guy-Manuel de Homem-Christo sans helmets, click here.) To learn more about the helmets’ origin, check out last May’s Wall Street Journal story about fans building their own Daft Punk helmets. If that link doesn’t give you the entire story, do a search for “wsj Daft Punk knockoff” and you might be able to read the whole thing that way.

Madonna in her pimptastic pantsuit was also well-accessorized last night. She told Ryan Seacrest that she was wearing her gold grill because “it pisses everybody off,” which is always a great reason for wearing anything. Her sparkling glove and letter rings made bold statements too.  I melted a little when she came out to sing “Open Your Heart” as Queen Latifah married off 33 gay and straight couples during the Macklemore, Ryan Lewis and Mary Lambert performance of “Same Love.” As I’ve said before, Madonna spoke up for people with AIDS at a time when very few did, so it seemed perfect that she would be the go-to woman for this moment. Another lady rocking a pantsuit was Yoko Ono, who at 80, served up impressive décolletage. It was great seeing her dance while my almost-husband Paul McCartney and connected-to-everyone Ringo Starr performed. (Yoko doesn’t get the recognition for style that she deserves; you can check out some of her looks in a post I did in 2010.)

Finally, I believe in jumping on any excuse for theme dressing, so I appreciated Katy Perry’s choice of a right-off-the-runway tulle Valentino gown with musical notes on the skirt for the Grammys. (The concept reminded me of a dress I wrote about for the Huffington Post, which honored a Nobel Prize winner for medicine. That skirt was printed with the cells the Nobel winner had discovered.) Katy previously caught my eye by wearing a much different musical-note dress in 2010. 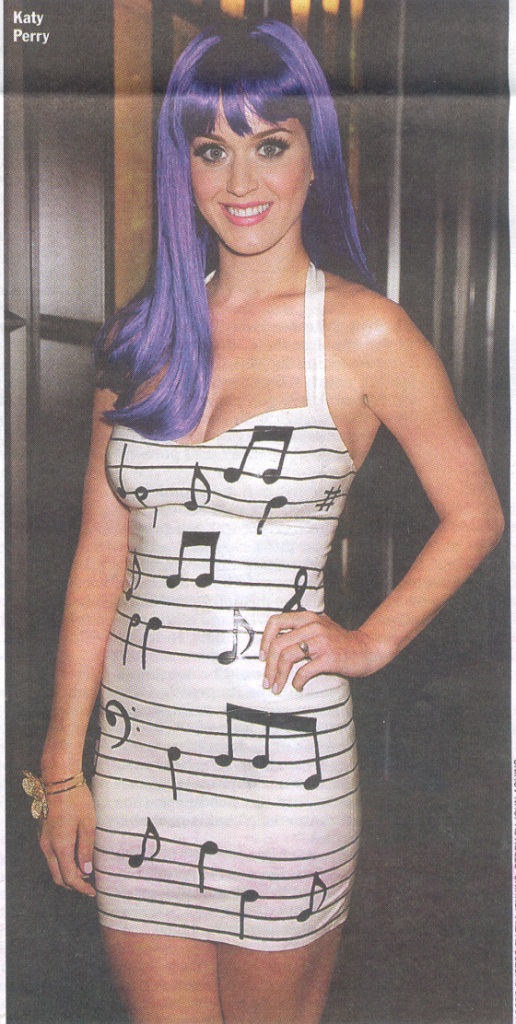 And now I realize I totally missed my chance to wear my vintage Patrick Kelly musical-note blazer while watching the Grammys last night!

Dammit! I was too busy working on my pre-Grammys post about the six degrees of Ringo Starr to consider my outfit.

*UPDATED TO ADD: Thanks to commenter Marguerite for pointing out that Pharrell’s hat was from Westwood. It has an interesting history — check out Malcolm McLaren wearing the hat design in a video for his 1982 song “Buffalo Gals.”

UPDATED AGAIN TO ADD: How could I forget how pleased I was to see Bruno Mars and Macklemore wearing bolo ties? I got very excited about bolos in 2010 and now I’m excited again!

You might also like
The Coveted's Candid Camera
A Cautionary Tale
Posh in PVC
Previous Post: « For Grammy Night: Six Degrees of Ringo Starr
Next Post: Step Aside, Heisenberg Hat! Pharrell’s Hat Has Taken Over »