Nelson Mandela — anti-apartheid activist, South Africa’s first black president and a worldwide icon — died yesterday at age 95. In July, on his 95th birthday, I reflected a recent trip to South Africa in a post inspired by my rediscovery of a giant anti-apartheid Keith Haring poster from the mid-1980s. 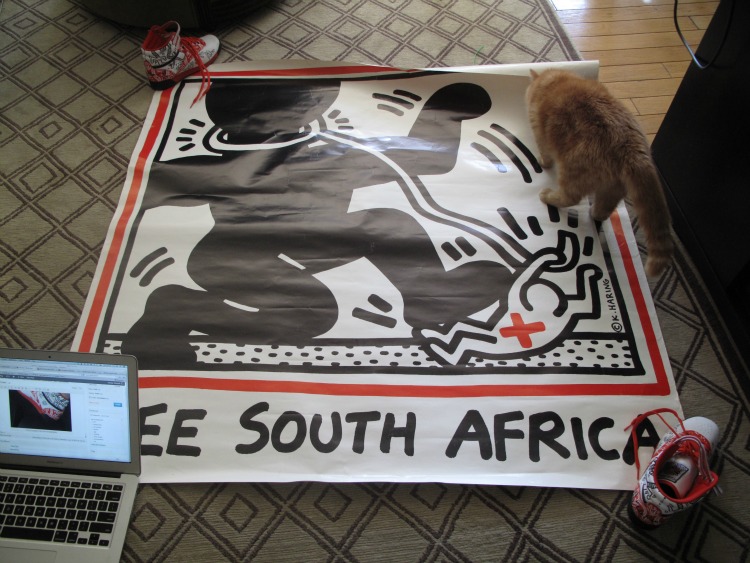 For size perspective, the poster is held down by two sneakers, a MacBook Air and a cat.

The anti-apartheid college campus protests are some of my most vivid memories from that time. I clearly remember my awe when I first heard the protest song “Free Nelson Mandela” by the Special AKA in 1984.

That song educated me about South Africa the way Neil Young’s “Ohio” enlightened me about Vietnam. You can learn more about “Free Nelson Mandela” from this June BBC America post.

Another song that has always stuck with me is 1985’s “Sun City,” written by Steven Van Zandt (Little Steven of Bruce Springsteen’s E Street Band) and performed by a group of musicians under the name Artists United Against Apartheid. The song declared the musicians’ intent to avoid performing at South Africa’s Sun City resort, which was then located in an “independent state” that the apartheid government created for a forcible relocation of blacks. Rolling Stone has called the song “one of the most fervent and forceful political statements to emerge from Eighties pop music.”

Mandela inspired numerous other songs — you can hear some of those on Mother Jones — but these two had the most profound effect on me. Great music for a great man.

You might also like
Stuck a Feather in Her Hair and Called It ... Over in 5 Minutes
My Best Dressed at the 2018 Grammys Is ...
Usher Was at the BET Awards; Nick Rhodes Is an Icon
Previous Post: « Throwback Thursday: December 2001 Hair
Next Post: Kiss Kiss Bang Bang: New Gun Emoji Stud Earring »