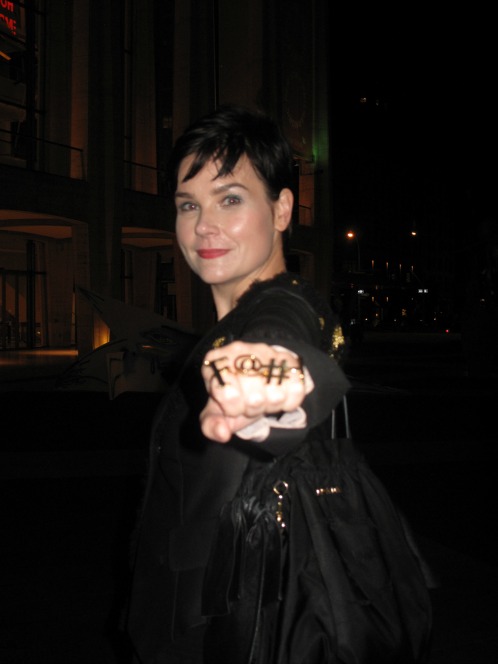 Rosalind shows off her rings after dinner.

Rosalind’s blog is The DIY Couturier and she lived up to her reputation by DIY-ing a jacket to go with her new rings. And look at her boots! 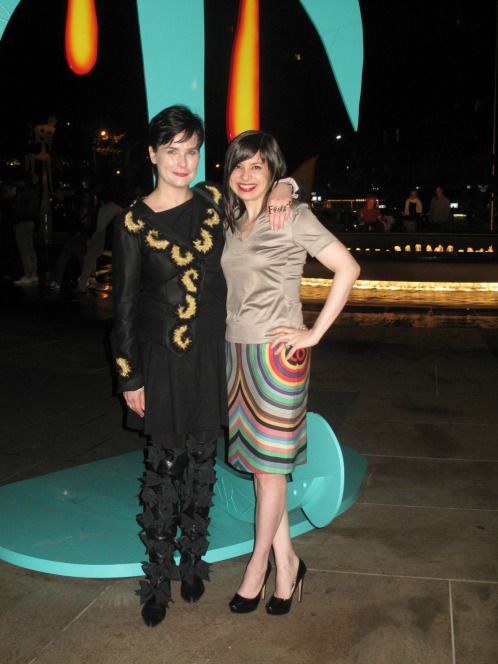 Look closely at Rosalind’s hand on my shoulder for another shot of the swear rings.

I like to ask customers what attracts them to a particular design. In this case, Rosalind is passionate about swearing. She wrote me:

“I’m really sweary. Some people breathe. I swear. It started a bit as a dare, when I was in TV and radio and around open microphones all the time. … I should have copyrighted FucketyFuck.”

“And speaking of copyright … no sooner had I started coveting your swear rings than, lo and behold, that bastard company started knocking them off. Suddenly they became important and full of meaning.  Independent small designers are being abused by these giant companies — it’s not like you can make up for it in perfume sales while you send a team of seventy LVMH top lawyers to beat the crap out of them. It’s not like they don’t have record profits to pay you for the design. Having the real deal became really important to me.”

As you can see, Rosalind really understands the issues involved when a big company knocks off an independent. For more on that issue, here’s a 2010 Wall Street Journal story by Christina Binkley that I’ve linked to before.

I’m glad that Rosalind is happy with her new jewelry and has already picked out her next purchase:

“They’re amazing. I can’t keep my paws off of them. They’re heavier than I had expected, and much smoother. I’m tactile and a fidgeter and I love the feel of them. I also love that I can pop the F off if I’m in, erm, Mixed Company. Or wear them one at a time. Now I have my eyes on the IDGAF necklace, because you had it on and it was so subtle and so flawless… Next trip.  Of course, if there is a lottery win, I want the whale.”

Having fun with Rosalind and her husband, Vijay, took my mind off my displeasure with my outfit that night. 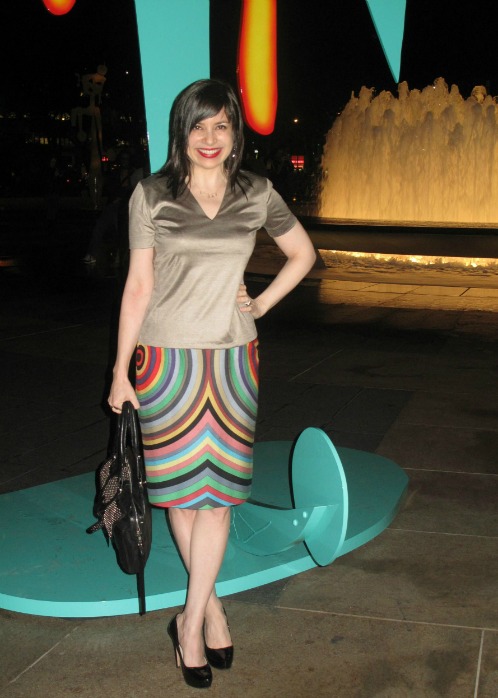 I’ve previously worn that rainbow skirt with a black t-shirt and it looked pretty bad. Earlier this year, in an effort to get out of the black t-shirt rut, I looked for a neutral to match one of the stripes. The Akris shirt matched perfectly, so I got it even though I wasn’t crazy about the boxy cut.  I liked the top with shorts in the summer, because the shorts added some sex-ay-ness, but I felt totally dowdy in the skirt outfit. It should be impossible to feel dowdy in a rainbow skirt, but I managed it. I think a thin black belt would have helped. Unfortunately, I don’t have one. This is why I don’t like “separates.” They’re so damn needy all the time. They always need a belt, or a very specific shoe, or an extra layering piece. Get over yourself, separates! You don’t deserve that much attention. I prefer dresses, suits and anything I can wear with jeans. So much easier.

You might also like
Have Dust Ruffle, Will Travel
The Royal Baby Boy
What Wendy Wore: Versace Dress From 2004 New Year's Eve
« Cyber Monday Sale Is December 2! Plus, the Week in Review
It’s Like Inception for Cheap Suits »