This weekend, MrB and I went to Tampa, Fla., for the Poynter Institute’s Bowtie Ball. The Poynter Institute is a top resource on journalism for working journalists, people who teach journalism, students, and consumers. As the Poynter website says, “We teach leadership, ethical decision-making and fact-checking; we teach editing, writing, reporting and digital media skills; we teach those in broadcast, print , online and mobile; we teach those trying to remake their organizations and those trying to remake their journalistic skills set.”

The Institute was founded by and named for Nelson Poynter, who produced newspapers in St. Petersburg, Fla., including the  St. Petersburg Times (now the Tampa Bay Times). He wore a bow tie every day. MrB, who received Poynter’s Distinguished Service to Journalism Award, wore a bow tie to the ball. I made do with a party favor. 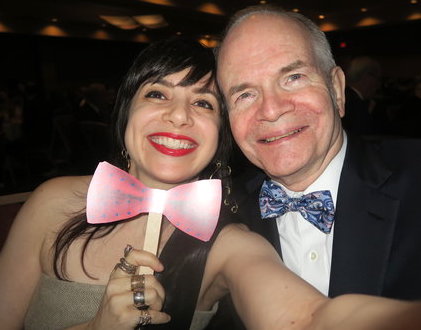 Here’s what the program had to say about MrB … 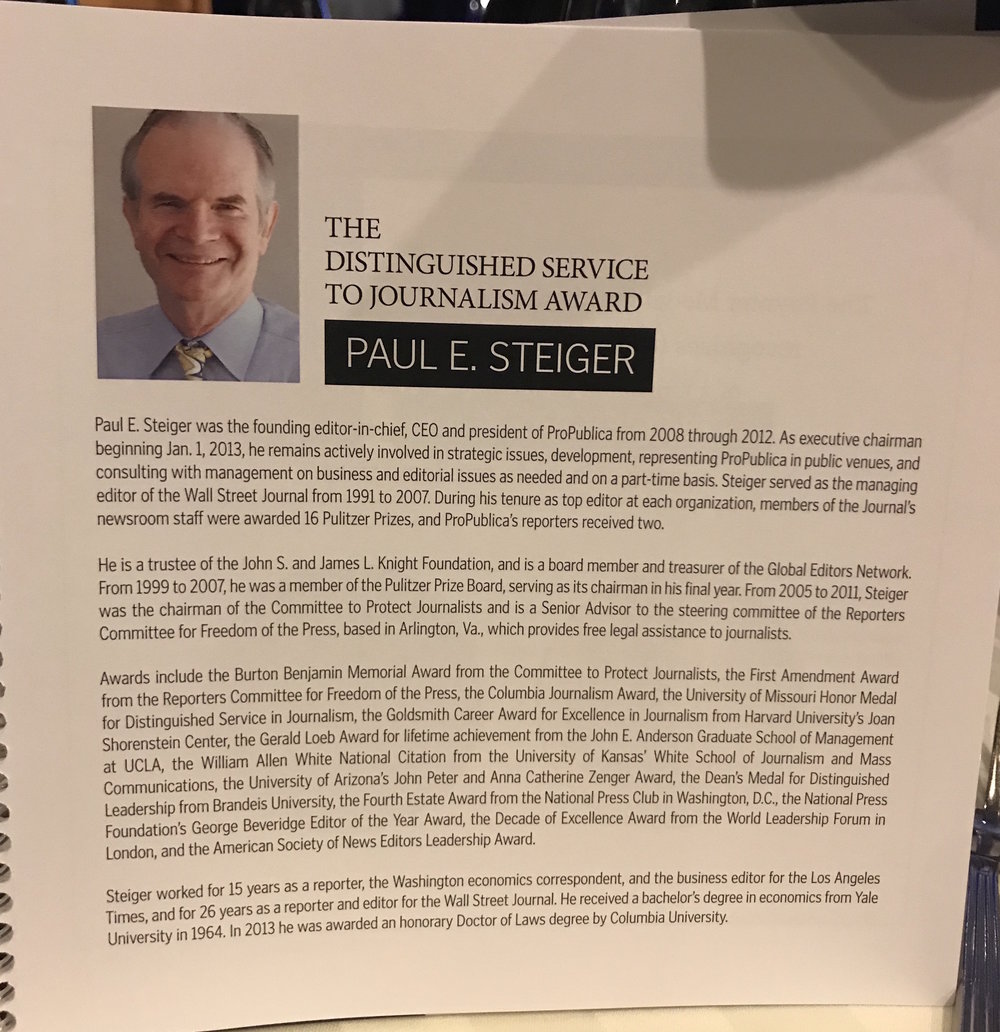 … and here’s what he had to say for himself in his acceptance speech.

Paul Tash, the chair of Poynter’s board of trustees, gave MrB a nice introduction and presented the award, which, thankfully, is being shipped to us because it is glass. I’m out of the glass-award-caretaking business after babysitting this award this summer.

The other honoree of the evening was broadcast journalist Judy Woodruff, who received the Poynter Medal for Lifetime Achievement in Journalism. 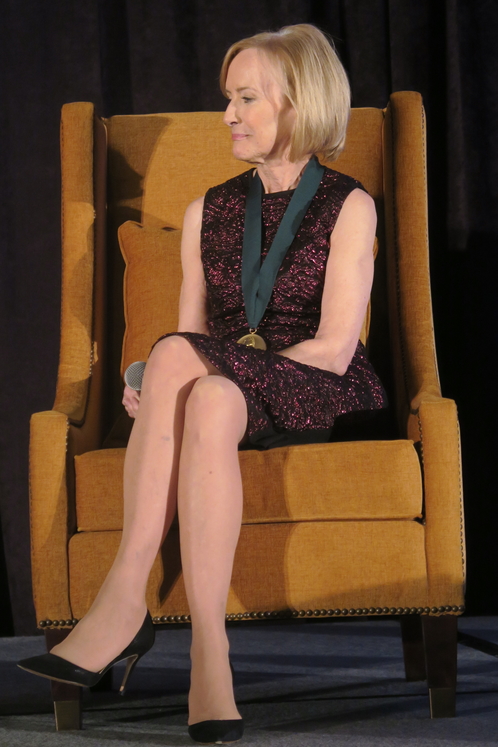 Judy was interviewed on stage by Indira Lakshmanan, an incredibly high-achieving journalist in her own right. Of course, Indira asked Judy about the recent exposure of media-industry sexual harrassers. She said journalists should strive to be better than those they cover. She also told some of her own stories from the 1960s, including one about the guy who didn’t want to hire her “because we already have a woman reporter.” Then there was the manager who did hire her as a newsroom secretary who said, “How can I not hire somebody with legs like yours.” I was oddly relieved to learn that even Judy Woodruff, like so many of us, didn’t have a comeback to such an unexpected statement. “The truth is, I just slumped my shoulders and slunk out the door,” she said. Of course, we know that Woodruff overcame the obstacles to become part of the first all-female team to head a major network newscast with the late Gwen Ifill at PBS. (As a bonus, last year, the pair moderated the Democratic presidential debate between Hillary Clinton and Bernie Sanders.)

I took advantage of being in Florida and wore a warm-weather dress I didn’t get to wear this summer. 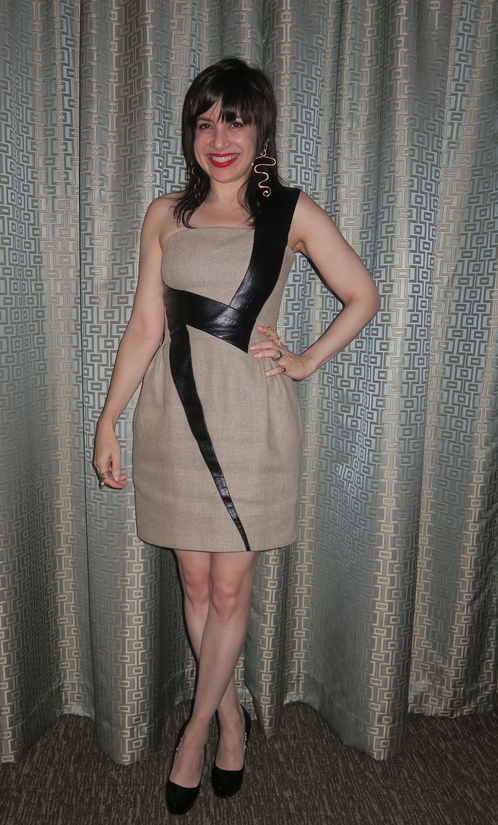 MrB also spoke at another journalism-related event last month: the annual Knight-Bagehot dinner. The Knight-Bagehot Fellowship offers full-time journalists the chance to spend a year doing a deep dive into business, economics and finance at Columbia University’s journalism school. AS you can see, MrB is all about education!

For that evening, I wore a dress I bought secondhand.

My friend Reg checked out my shoes and was surprised. He said, “Hey, I’ve seen those before.” I was surprised by his surprise, and said, “Dude, you should read my blog sometime!” You readers know that I’m all about slow fashion! I even did a YouTube video specifically about keeping shoes for years.

I told Reg I was going to send him a link about all of this. Reg, here’s your link! This whole blog post is dedicated to you.

You might also like
Wednesday's Video: Vintage Clothing FAQ
What Wendy Wore: Red Lips for Our Anniversary
Happy Birthday to Paul McCartney; Outfits for Ringo
Previous Post: « The Week in Review
Next Post: It’s Election Day. Do the Right Thing. »