Gorgeous friend and client Jane emailed me last week to point out an Alexander McQueen poison ring on Net-a-Porter. “You were ahead of the poison ring curve!!!” she exclaimed.

Here are pictures of the McQueen ring. If you want more information about it … well, find it yourself! I ain’t gonna link to someone else’s jewelry. I will say that the ring is made out of silver-plated brass (not actual silver). 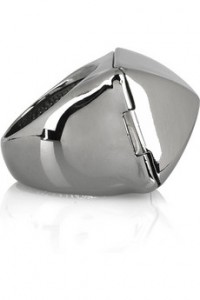 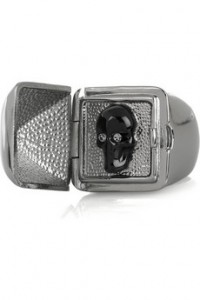 Here’s my Juana Peekaboo Skull Ring, which I designed in 2006, using nearly an ounce of 18K yellow gold, diamonds and white sapphires. I was inspired by vintage memento mori that I had researched. 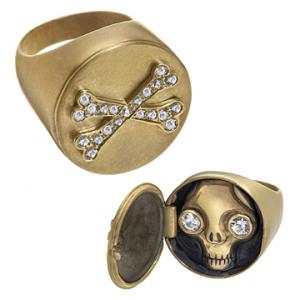 My Juana Peekaboo Skull Ring, shown both open and closed.

And here’s what I wrote about my ring in 2007, after the Juana appeared in L.A. Confidential’s Do column because skulls were “in,” then appeared again in the Don’t column five months later when skulls were supposedly “out.” (And that, kids, is why you should wear what you want and not worry about what other people think. You’re in, you’re out, you’re in, you’re out … it’s ridiculous. Don’t even sweat it anymore.)

The Juana ring was inspired by Juana La Loca. I have matching lockets here, here, here and here. You can also buy just the skull or crossbones in gold. My thriftiest version of the Juana is a sterling silver skull necklace with white sapphire eyes. It was made in New York by a great guy who works on all my most complicated mechanical pieces. This necklace is normally $500, but since I don’t want you to have to settle for piece of brass jewelry by another designer for financial reasons,  I’m putting the silver and sapphire Juana necklace on sale for a week. Enter the promo code to get the special price at checkout.

For the dudes, I have cufflinks here.