For a couple of weeks, I was so fixated on seeing Skylar Grey perform at Le Poisson Rouge that I hardly know what to do with myself now that the show is over!

I’ve been a big fan of Skylar’s since “Love the Way You Lie” came out in 2010. The song was performed by Eminem and Rihanna, but I quickly found out it was Skylar who wrote the haunting hook. (I love tracking down moody-sounding female vocalists.) Skylar’s excellent debut album, Like Blood Like Honey, came out in 2006 under her real first and middle name: Holly Brook.  I downloaded that album as well as song collaborations with other artists, including “Coming Home” by Diddy (2010) and “I Need a Doctor” by Dr. Dre and Eminem (2011), while I waited for a full album by the artist now known as Skylar Grey. (Skylar explained her new stage name in a Wall Street Journal story that I blogged about last December. This article from last week’s Milwaukee Journal-Sentinel — Skylar is originally from Wisconsin — is another good telling of the tale.)

I was also waiting for a full concert. After missing Skylar at Lollapalooza in 2011 while I was otherwise engaged, I caught her doing a couple of songs at Cyndi Lauper’s Home for the Holidays concert a few months later. I was excited to finally get a full album and full show in the same week. Don’t Look Down came out last Tuesday. It’s been as high as #2 on iTunes, topped only by Jay-Z’s new album. The concert followed on Thursday. Le Poisson Rouge has table seating, so I gathered up five lovely wimmins — Jen, Amanda, Stacy, Alyssa and Alice — and we got a table to ourselves, right next to the stage. During the enjoyable opening act, a duo called TeamMate that covered Madonna’s “Causing a Commotion,” we all had Prosecco and … Tater Tots. The dinner of champions. What?! I love Tots! Napoleon Dynamite was not wrong about the desirability of Tots.

We were finished with all of that by the time Skylar came out. Look at the great view we had! 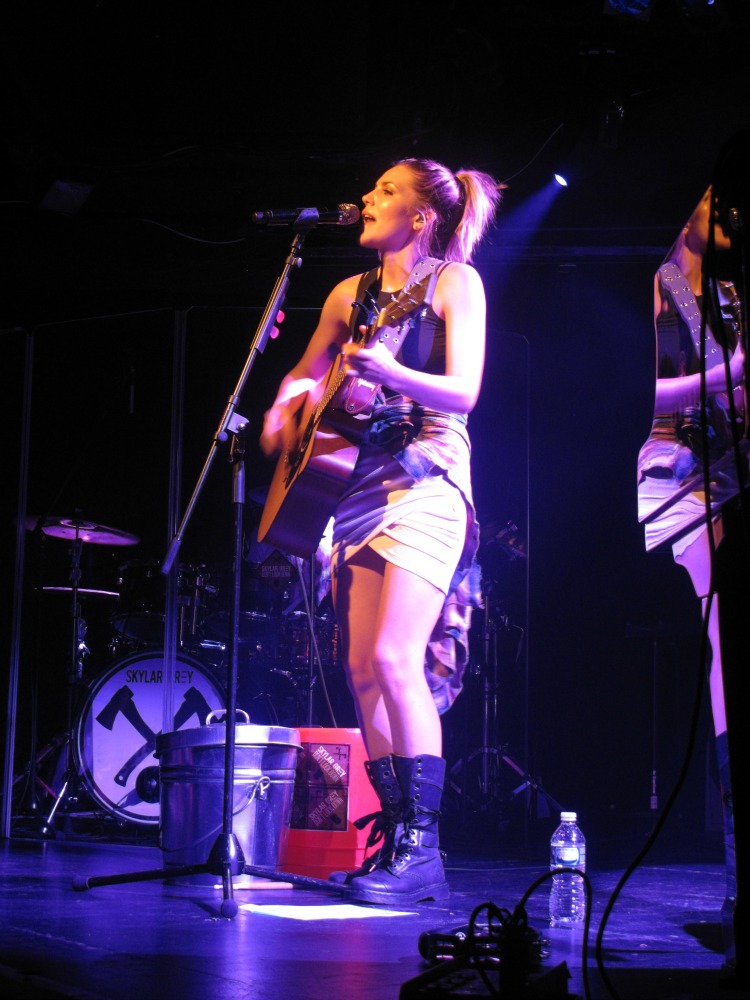 Because I didn’t have people jumping around in front of me and I was so close, I recorded two entire songs. Here is “C’mon Let Me Ride” …

… and “Final Warning,” which I already raved about here.

After the show, Skylar patiently stayed at her merchandise table till everyone had gotten an autograph or a photo. I was one of the last ones. 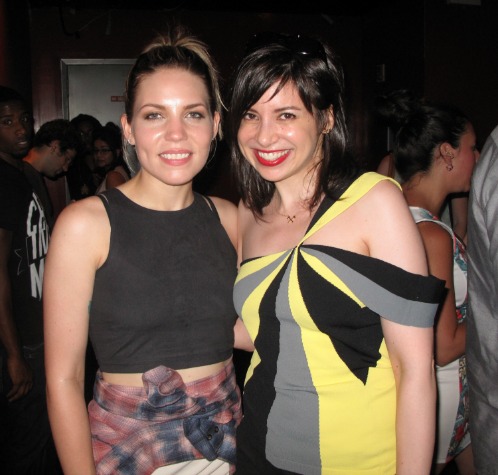 If you look closely at my necklace in that picture, you’ll see it’s Skylar’s double-ax logo — the same image that’s on the drum set in my photo of her on stage. I first saw the logo when the official “C’mon Let Me Ride” video came out in December. I immediately thought, “That would make a great stud earring … and why not do a matching necklace too?”  But I didn’t want to do it unless I knew I could get the designs to Skylar. While my general “gifting” policy is #phuckyocelebrity these days, it is her logo. I wouldn’t feel right about making a jewelry version if she didn’t have it herself. By the time I sorted out the logistics, Skylar was on the road but her earrings and necklace will, hopefully, catch up with her shortly. I didn’t give them to her at the show because her pieces are 18K gold with diamonds, and it’s not a good idea to hand over things like that in a hectic environment. But I wore the gold-plated silver samples so I could point to them and say, “This is what you’re getting, kinda!” Here’s a closer look at the earring samples. I saved the diamonds for the gold versions; that’s why you don’t see any in this photo. 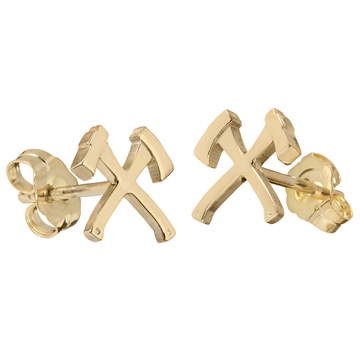 Here is the necklace sample. 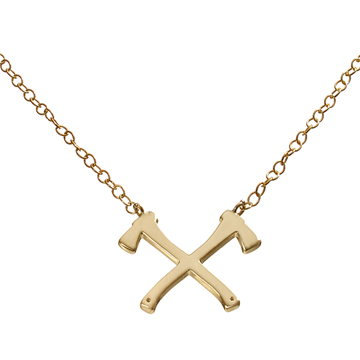 Before, during and after the show, people were asking me where they could get the necklace but it won’t be for sale on my website unless Skylar decides she’s into that. She hasn’t even seen her own pieces yet! But you can console yourself with these single ax stud earrings in 18K gold … 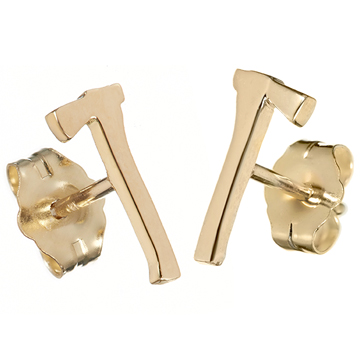 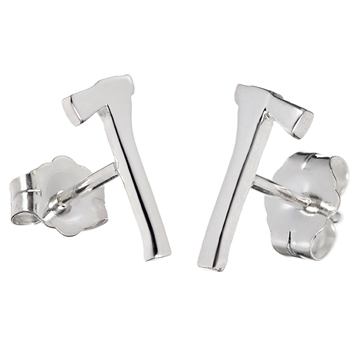 Here’s the rest of my concert outfit. 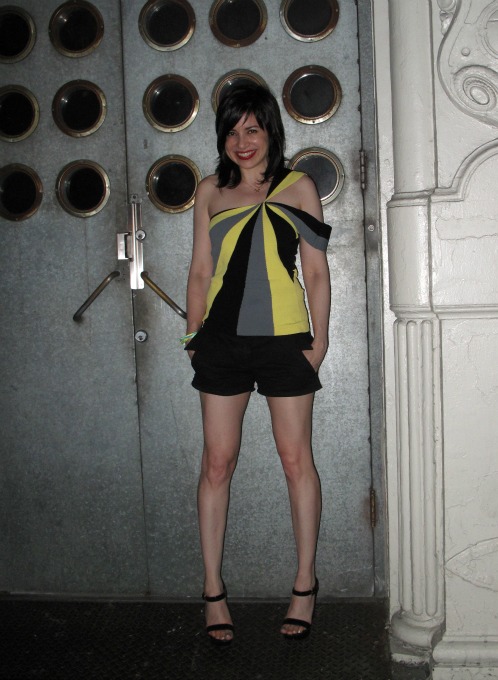 Earlier in the evening, I wore the Sunpocket sunglasses I got in London last month. They go well with the top, no? You can see my gorgeous friend Alyssa in one of the lenses, as well as the guy on line behind her. You also get another look at the logo necklace. 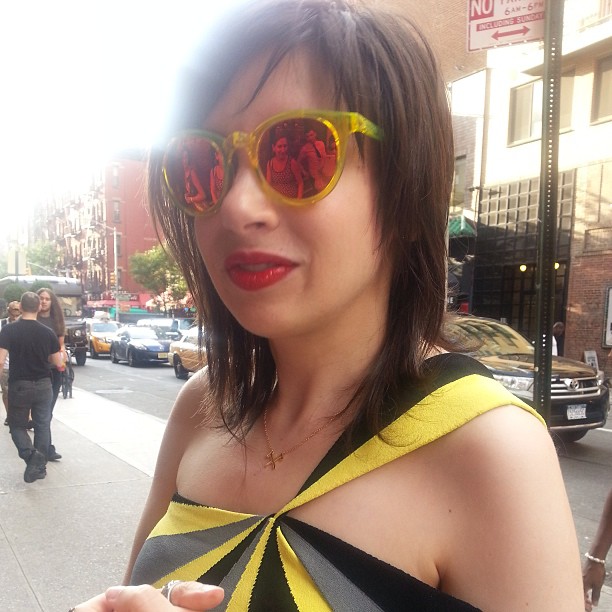 It looks like my next musical experience — before going back to Le Poisson Rouge to see Laura Mvula — will be seeing my friend Jen perform with Stranded at the famous Bitter End on July 24 at 8 p.m. If you’re in New York City that night, join us! Jen has performed on and off for years. She was one of the peeps who came to the Skylar Grey concert and I was pleased to get an email from her in the middle of the night on Friday, after the show, saying she was up watching Skylar’s videos on YouTube and was “so inspired!” Yesterday, I got an email saying, “So inspired by Skylar. Actually sang for several hours yesterday. And I am finally buying a new keyboard.” Today’s email announced the show at the Bitter End. Isn’t that cool? Good music inspires more music. And jewelry, of course. Never forget the jewelry!

You might also like
What Wendy Wore: Terrible Outfit Photo of the Day
Let's All Stare at Rihanna's Chest
Proud as a Peacock
Previous Post: « The Week in Review: In the News and on the Blog
Next Post: Telling It Like It Is: Stylist Lysa Cooper in Vogue Italia »