Rolling Stone Keith Richards turns 69 today, thanks to an indomitable constitution that has survived everything from heroin to a mean coconut tree. His rock ‘n’ roll sartorial flair is intact too: when MrB and I saw the Stones on their 50th anniversary tour at Barclays Center on December 8, I was thrilled to see that Keef was wearing a très WendyB turquoise motorcycle jacket. Here’s a front view of that, along with Mick’s sequin jacket … 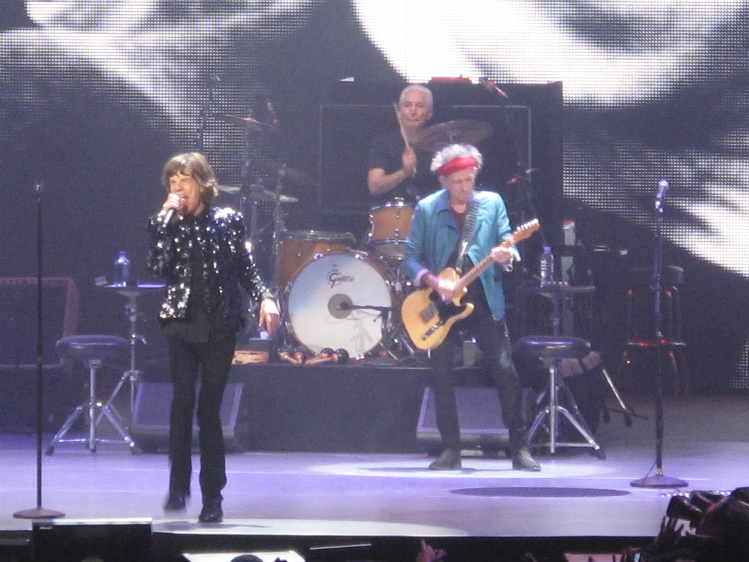 … and here’s the back view. 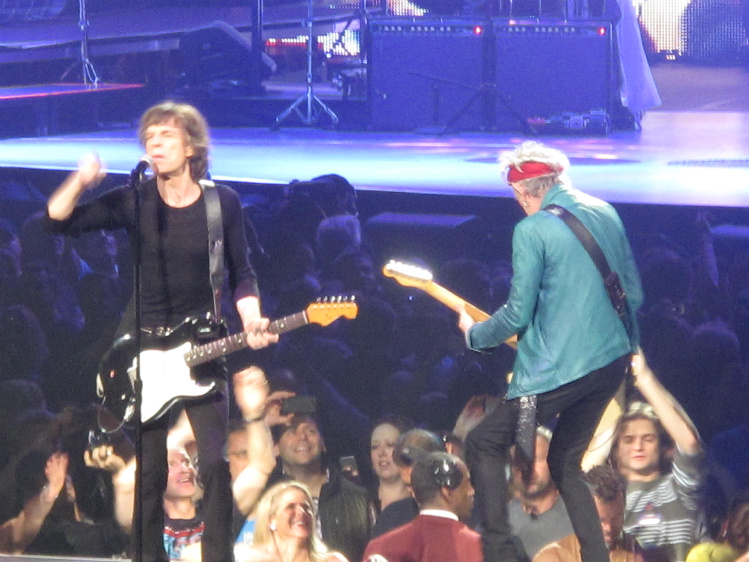 I missed getting a clear shot of Mick in the long, black, Mongolian lamb jacket he wore at the start of “Sympathy for the Devil.” Same with the ombre sequin tailcoat he wore for the encores. But I did get photos — including this one of Mick singing “Gimme Shelter” with Mary J. Blige — showing that Mick, like his bandmates, has kept his skinny ’60s rock-star physique. 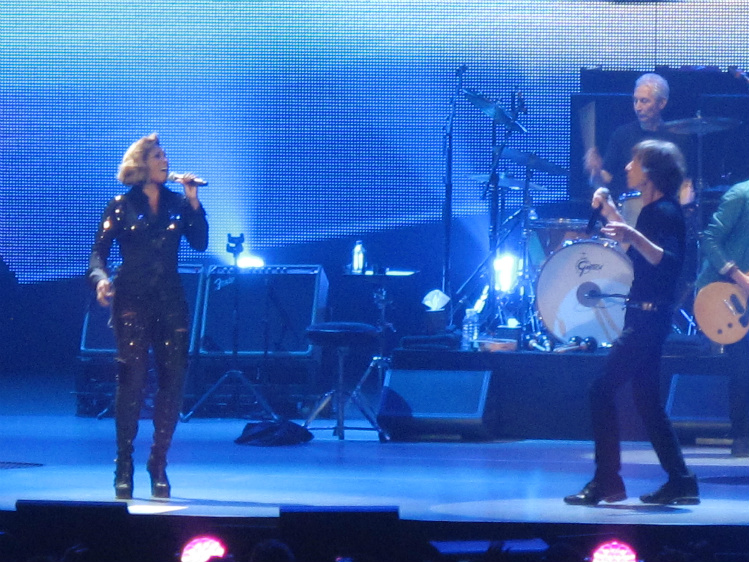 Seriously, his entire body is the size of one of Christina Aguilera’s thighs … one of her 1999 “Genie in a Bottle” thighs, obvs.

A few years ago, I got to shake Mick’s hand at a party and exchange a few words with him about designer Ossie Clark, but I hadn’t seen the Stones live since they played Giants Stadium in 1994. That show was a pretty bad experience, because I loathe Giants Stadium as a concert venue, so I’m glad I got another chance. (Barclays, by the way, is an amazing venue for sound and seating, but the ticket-taking and merchandise-selling departments were woefully understaffed that night.) 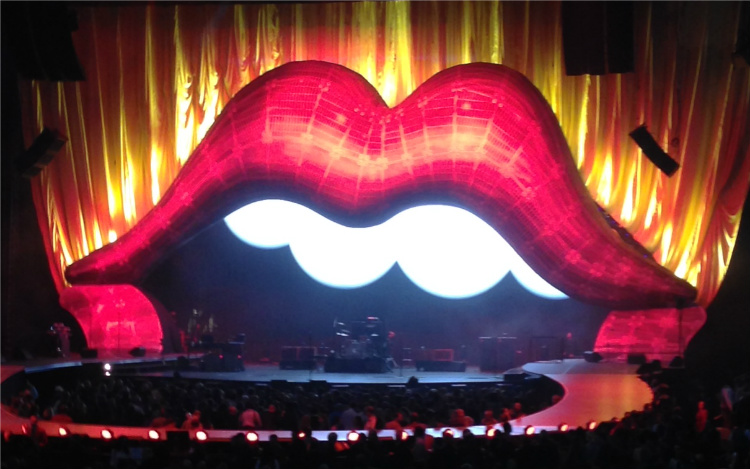 The stage at Barclays.

You really have to see Mick in action to believe him. Watch any clips of him dancing in days gone by — whether during the ’60s or in 1985’s gayest video of all time — and trust me when I say that he still dances exactly like that, the entire time he is on stage, at the age of 69. Damn! He still got the moves like Jagger! It’s mind-blowing and inspiring. 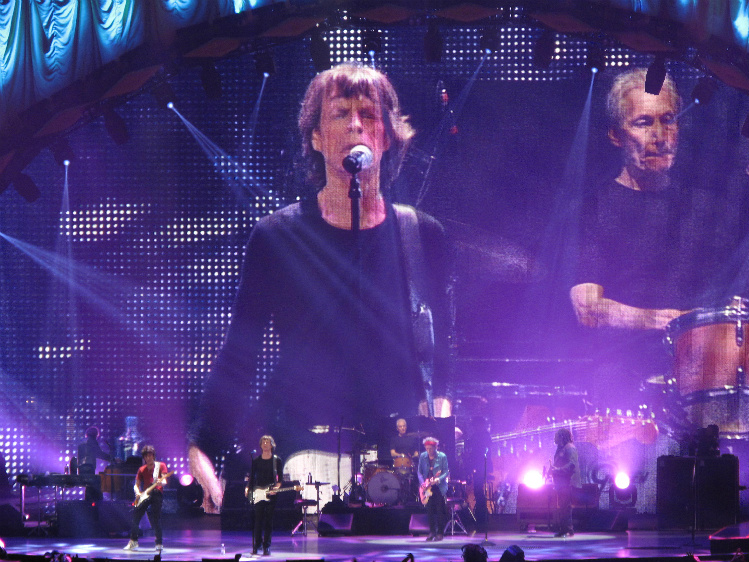 Mick, larger than life, at Barclays.

This September, I decided I wanted to have moves like Madonna when I’m 54, but now that I’ve seen the Stones, I’m aiming higher. I want to wear ombre sequins and skinny jeans and dance like a maniac when I’m 69. It pisses me off when people say the Stones and other musicians of their generation should hang it up. Why? They’re having a great time, the all-ages audience is having a great time (my entire subway car was singing “Woo! Woo!” from “Sympathy for the Devil” all the way home)  … 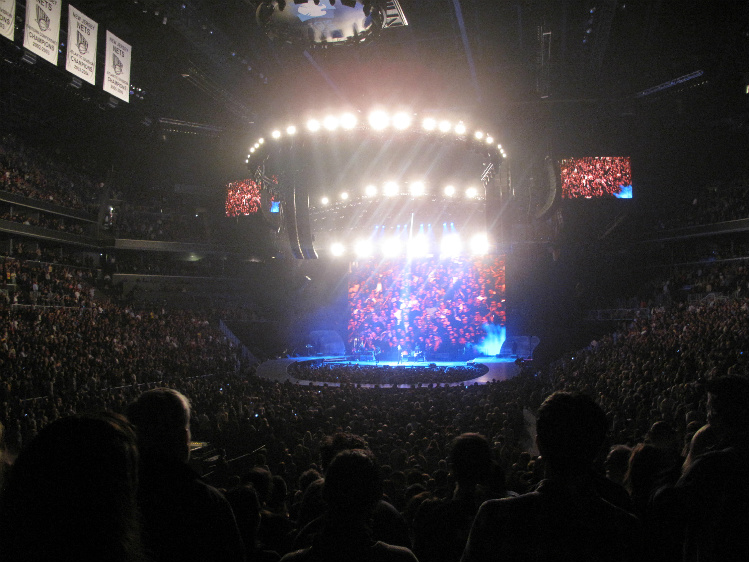 … who the fuck is it hurting? If you don’t want to have a great time with us old folks, get off of our cloud. Stay home. If you’re old, you can hang out in the rocking chair I won’t be needing on concert night. If you’re young, you can keep yourself busy reblogging soft-porn gifs and photos of self-harm scars to your Tumblrs. Oh yeah, I see what you kids are doing and I wouldn’t relive those miserable teenage “forever alone!” years for all the money in the world. The good news is you’ll grow out of it. Hang in there!

UPDATED DEC. 20, 2012, TO ADD: Today’s New York Times style section has a story by Alex Williams mocking the appearance of the “retirement-age rock icons” who were kind enough to get off their asses and perform at the 12-12-12 concert to raise money for victims of Hurricane Sandy. It says their aging is “more tragic since they toil in a business built on youthful rebellion, and contrasts so sharply with our shared cultural images of them, frozen in youthful glory.” Apparently, hair dye and sequins are offensive and, as for an unbuttoned shirt, “…when these flesh-baring rockers are men of Viagra-taking age, that’s a visual most people could do without.” Admittedly, it’s interesting to see men persecuted for their appearance and urged to become invisible the way women of a certain age usually are, but two wrongs don’t make a right. I say there’s nothing more rock ‘n’ roll than saying “fuck you” to the expectations of the New York Times and the snarky Twitterati it quotes. I hope Paul McCartney dyes his hair till he’s 105 just to annoy them.

You might also like
The Week in Review
What Wendy Wore: Music at Sidewalk Cafe
The Final Friday the 13th Earrings!
Previous Post: « Gwen Stefani on Vogue’s Cover
Next Post: For the Holidays: Wendy Brandes Jewelry Gifts Under $100 »