Actress Jean Stapleton, best known for playing Edith Bunker on the iconic ’70s television show All in the Family, died yesterday at age 90. 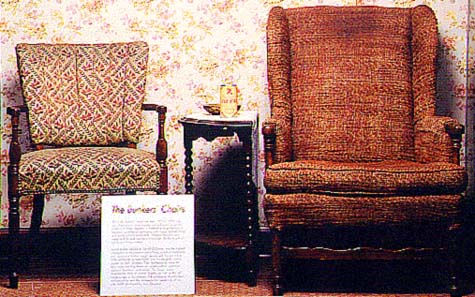 The chairs from All in the Family are in the Smithsonian. Click for source.

Back in February, I described how much that show affected me.

CLICK HERE TO READ ABOUT MY ALL IN THE FAMILY MEMORIES.

I admired Stapleton for refusing to play an Edith Bunker type for the rest of her career. This Washington Post obituary is well worth reading for some insight into her personality. For instance, in 1972, a year after All in the Family went on the air, she made it clear that Edith was a character to play — not a PART of her — when she told the New York Times:

“What Edith represents is the housewife who is still in bondage to the male figure, very submissive and restricted to the home. She is very naive, and she kind of thinks through a mist, and she lacks the education to expand her world. I would hope that most housewives are not like that.”

Compare that to Zooey Deschanel, who strikes me as too smart to be putting on an “adorkable” persona even outside of her show, New Girl. These days, I’m sure living your character makes the job of one’s brand managers/publicists/agents so much easier, but, really, is that your goal in life? To simplify the work for people who make money off you? Please! Stapleton didn’t play that game. The Post obit has a quote from a 1979 interview Stapleton did with the AP, shortly before the character of Edith Bunker was killed off in Archie Bunker’s Place, the successor show to All in the Family.

“My decision is to go out into the world and do something else. I’m not constituted as an actress to remain in the same role…. My identity as an actress is in jeopardy if I invested my entire career in Edith Bunker.”

And check out Stapleton’s last television appearance with Carroll O’Connor, who played Edith’s husband Archie Bunker, in 2000. She was brought out as a surprise to O’Connor. When she came out, she reorganized all the seating. Then she praised O’Connor’s new movie, giving him her highest compliment by emphasizing how different his work was from his All in the Family role  — “the mark of a fine actor,” she said. Then, at 4:45, when the hosts of the show asked both actors to do their All in the Family voices, she instantly said, “No.” When they persisted, she said, “In the first place, I only do it for pay … secondly, one does not go back …” A sharp, funny, tough lady!

The character of Edith Bunker died offscreen during Archie Bunker’s Place. The episode “Archie Alone” explained her death and showed Archie grieving. I think the final few minutes of that episode are a fitting send-off for Jean Stapleton, a woman who wouldn’t stifle herself.

Oh, fuck it. That’s too sad. Let’s watch the final minutes of the last episode of All in the Family,”Too Good Edith,” in which Edith hides a painful case of phlebitis from Archie while helping him prepare for the St. Patrick’s Day festivities at his bar. Archie, shaken by her illness, declares his love.

And we must sing the theme song together one more time. Remember, the difficult line is “Gee, our old LaSalle ran great“!