My recent musings on 1980s painted denim jackets drew the attention of my high-school classmate, Karen D. Karen told me she still had her painted Jim Morrison/Doors jacket and, within moments, sent me a photo. I could hardly believe my eyes! It looks brand new.

Jim Morrison, the lead singer of The Doors, died in 1971, but he had a second coming of sorts in the ’80s. (Sadly, while I was working on this post yesterday, it was announced that The Doors keyboard player, Ray Manzarek, died of bile duct cancer at age 74.) No One Here Gets Out Alive, the Morrison biography by Jerry Hopkins and Danny Sugerman, came out in 1980, its cover featuring a gaw-juss photo of Jim taken in 1967 by Joel Brodsky. I personally read that book at least eleventy times even though I didn’t understand most of the sex and drug references. 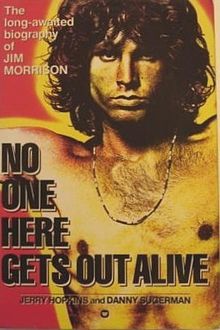 Click to purchase on Amazon. I won’t get any money for that. Just being helpful. 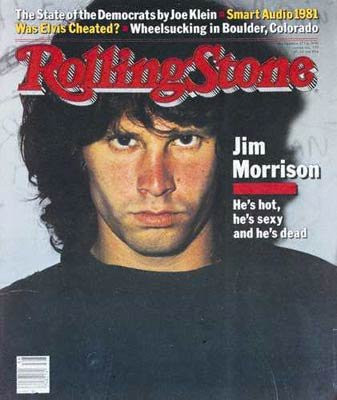 Jim’s bare chest adorned a hell of a lot of denim jackets. 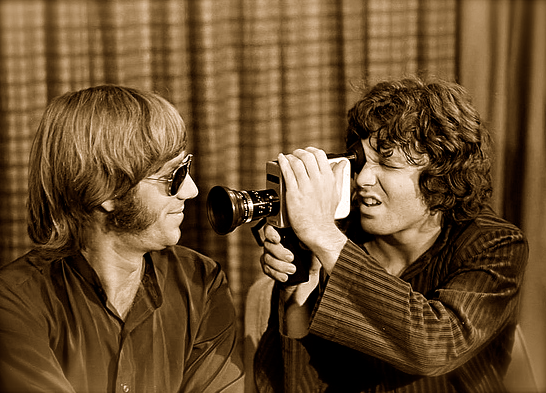 By 1969, Morrison had gained weight and the chubbier look didn’t get painted on anyone’s jacket a dozen years down the road. But Jim — perhaps mellowed out by the excessive amount of alcohol he consumed — said he was okay with his avoirdupois. While I was looking up the 1981 Rolling Stone cover, I came across this adorably animated video of a real Morrison interview in which he talked about the joys of being fat and eating lots of starches.

After Karen wowed me with her Morrison jacket, she blew me away with her official Madonna Desperately Seeking Susan jacket. It’s pristine — it still has the tag on it! 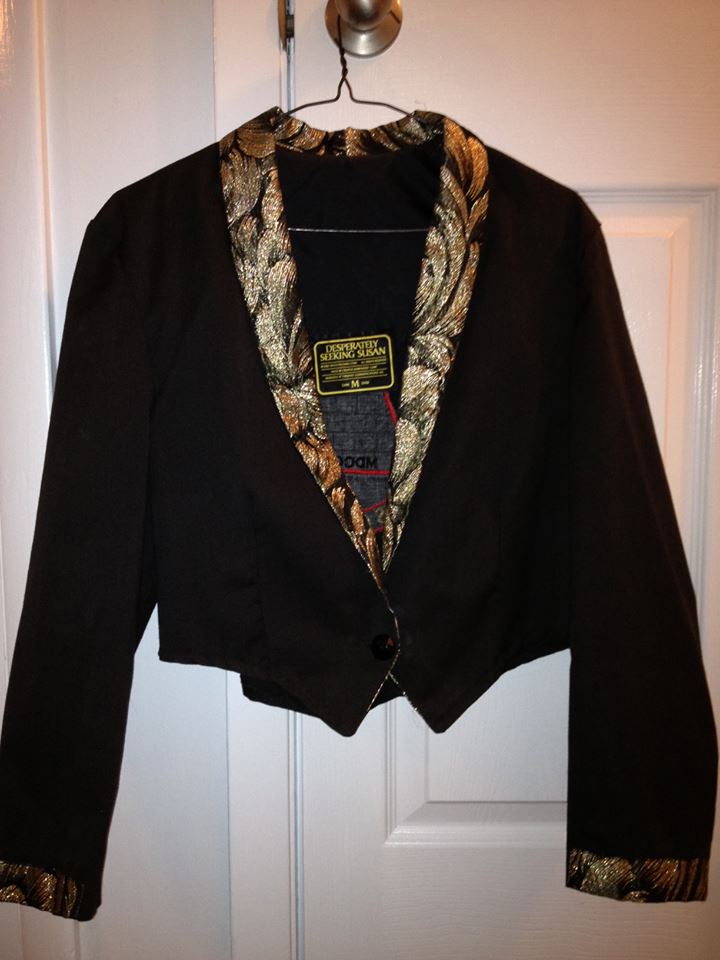 I’m considering having a child just so I could offer Karen my first-born in exchange for this jacket. 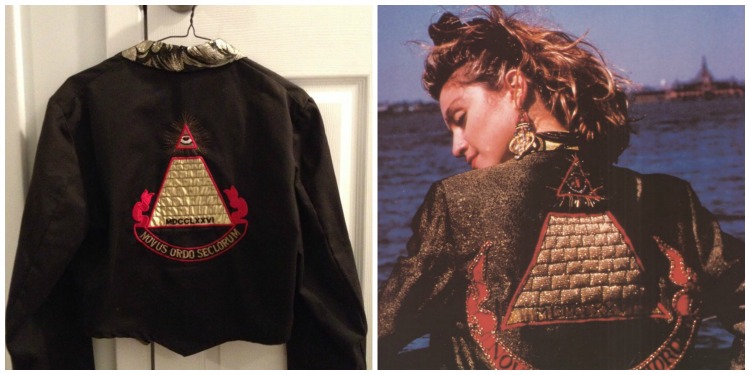 Karen’s jacket on the left; Madonna in Desperately Seeking Susan on the right. Click to enlarge.

Karen no longer has her Desperately Seeking Susan rhinestone boots. That’s good because if she still had those, I would lose control and burglarize her home of all her great ’80s stuff.  About the jacket, she wrote, “I think I got it in Paramus Park [the mall we all went to]. Can’t remember which store. There were three stores I always shopped in during the 80’s … Merry-Go-Round, Chess King and I can’t remember the name of the third one. I got the boots from The Wild Pair.”

Ah, Chess King! The source of my friend Jim’s still-desirable turquoise leather jacket. I asked Karen about her thoughts on ’80s fashion in general. She replied:

“I miss ’80s fashion and it doesn’t deserve the bad rap it so frequently gets today. I admit some of it was tacky but at least it was always exciting and took chances. Today’s fashion seems stale in comparison. It saddens me to think that there are people today that mistakenly think Hot Topic is the epitome of edgy fashion! I’m still a ‘rock chick’ at heart after all these years and this tends to influence my taste along with my love of the macabre. I favor Victorian Gothic fashion with a bit of PVC in the mix.”

Karen needs to check out my Juana skull necklace. I bet it would be right up her alley. And, naturally, I agree with what she says about ’80s fashion. Sometimes I wonder if that’s just run-of-the-mill nostalgia and that everyone believes the fashion of his or her teen years is the best. Then I think, “Maybe everyone believes that, but we’re actually right. Ha!” The fashion industry of the ’80s and early ’90s really was so fun and much less corporate than it is now. How could you not love Maripol’s rubber jewelry? And the house model for Stephen Sprouse’s black, graffiti, and neon designs was transgender model Teri Toye — 25 years later, people STILL get worked up about transgender models. (Teri is the fierce blonde in this footage from a 1984 Sprouse show.)

The industry people I talk to agree that it was easier for a small designer to get started then, especially if s/he attracted the attention of the supermodels, who might walk the runway for clothes. The supermodels were THE big celebrities and they owned the magazine covers, unlike now, when nearly every cover features an actress trying to give good face. As for the average gal, she could wear a bandage dress — if she could afford an Alaia like Grace Jones — but lots of us dressed in boxy layers with shirts buttoned up and fastened at the neck with a brooch and we felt FABULOUS. 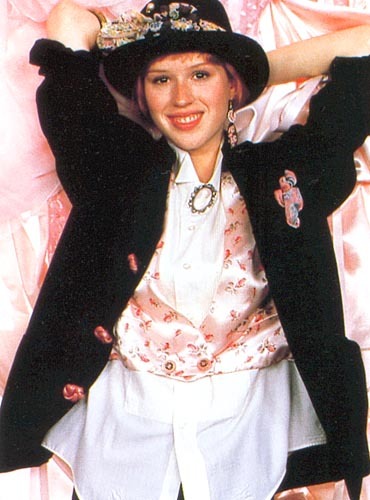 Molly Ringwald wore the look in 1986’s Pretty in Pink.

All of this was years before fast-fashion retailers like Topshop, Uniqlo, H&M and Zara came to the U.S. or even became available online. If you needed something cheap, you got it at the thrift shop or the dollar store. I knew people who dressed spectacularly thanks to the dollar store. Or you could go the DIY route. I spent plenty of time hanging out in people’s bedrooms waiting for them to finish gluing feathers onto their club costume for the evening. Nowadays, when I look at the people waiting to get into a club, all I see is bandage dresses from Bebe, and you know how I feel about those.

All of this reminded me that I do have some Madonna relics I haven’t posted: two issues of Vanity Fair with Madonna on the cover. Both were photographed by Stephen Sprouse collaborator Steven Meisel. Here’s 1991 … 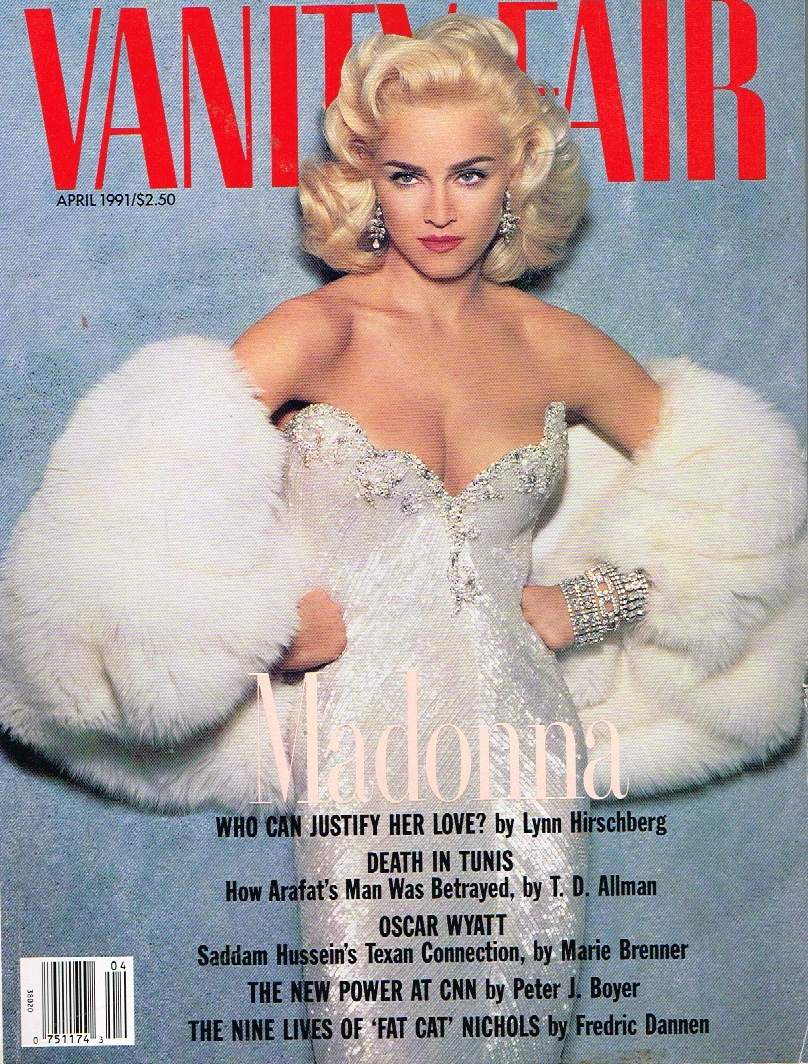 … and here’s 1992 (the issue also includes a good interview with Linda McCartney). 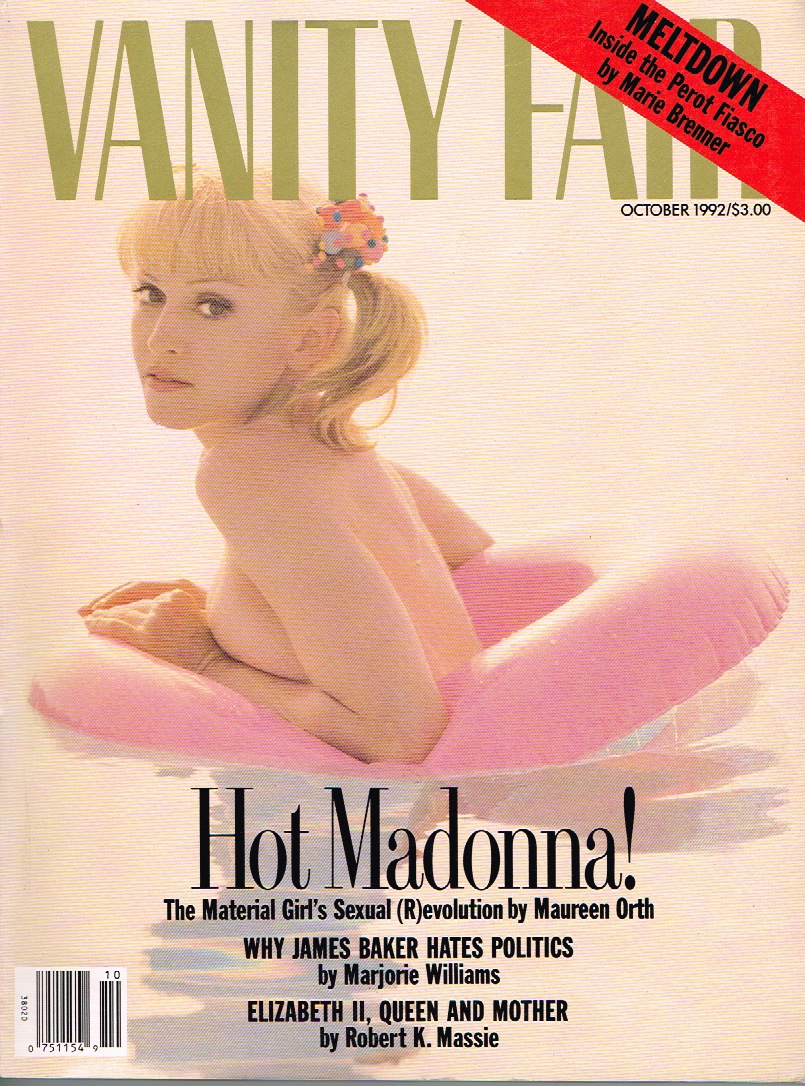 The 1992 article was done to promote Madonna’s Sex book. I still adore the pastel-tinted, Lolita-themed photographs. I can’t decide which is my favorite. Is it this one? 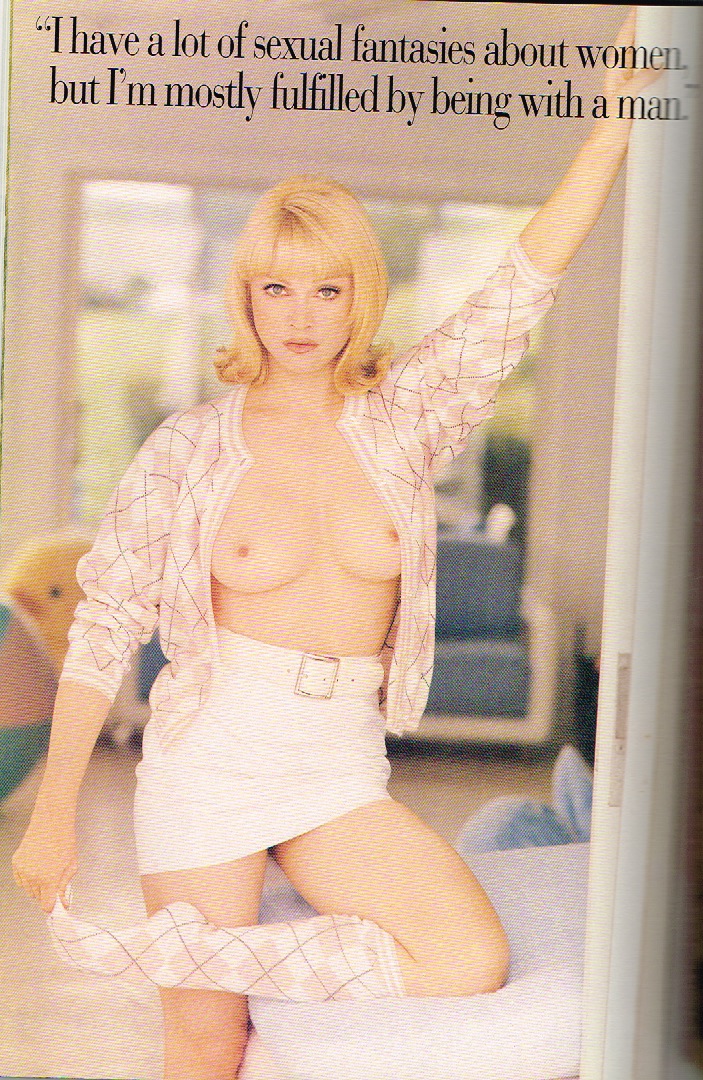 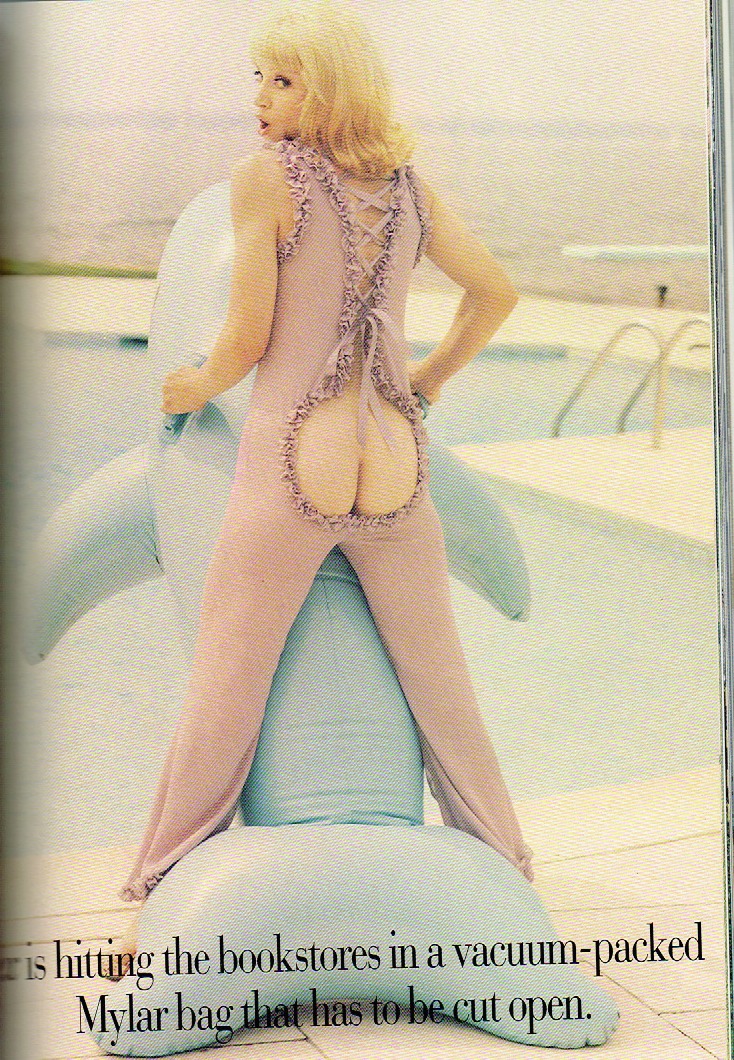 Feel free to ponder that for a while!

UPDATED TO ADD: The Wall Street Journal is pondering the fishnets that Madonna wore to the Billboard Music Awards on Sunday. She received the Top Touring Artist award for her 88-show MDNA tour (I went twice!), which grossed $305 million. Naturally, there was an outcry on Twitter about whether a woman of her age should be allowed to wear what she wants. I say she’s got 305 million new reasons to say “Fuck you” to society’s expectations. I’ve written about this before, and I’ll repost the video of a 34-year-old Madonna predicting how things would go down.

This makes me think of legendary actress/singer Elaine Stritch. I saw her perform at the Carlyle Hotel a couple of years ago, and she gave her final show there last month, at the age of 88. She had a signature look she wore for all her performances — white shirt and black tights. 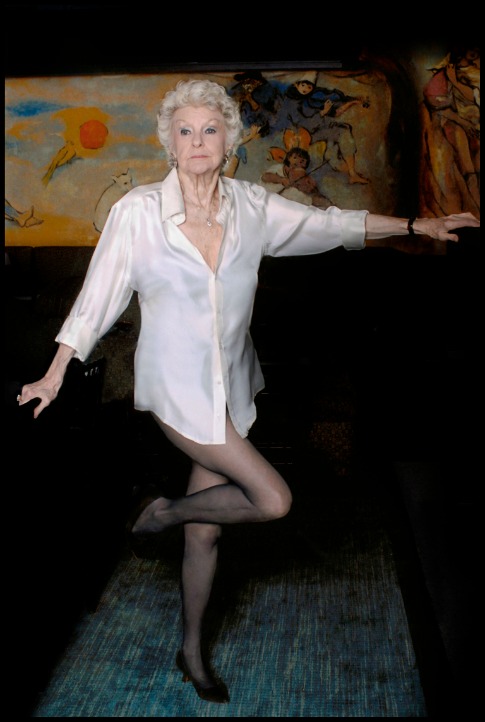 You’d have to have a hell of a lot of nerve to tell the great Elaine Stritch what to wear. I hope Madonna follows in her tights-wearing footsteps, just to piss the world off.

You might also like
On the Town: Macklemore at the Theater at MSG
Throwback Thursday: What Wendy Wore in Europe in 1989
Recommended Reading: The Children of Strangers
« What Wendy Wore: Modernizing Psychedelia
It’s “Jif,” Bitch! »