I love that Steve Wilhite, the inventor of the GIF, got a lifetime achievement award at The Webby Awards. (If you don’t know what a GIF is, click here.)

What I love even more is that Wilhite is adamant about the often-disputed pronunciation of his file format. The New York Times quoted him as saying:

“The Oxford English Dictionary accepts both pronunciations. They are wrong. It is a soft ‘G,’ pronounced ‘jif.’ End of story.”

Does anyone have a GIF of Marshall McLuhan’s famous line from Annie Hall? I’d like it combined with the Family Guy version: “You know nothing of my work!” It seems to apply to the situation.

Speaking of honors, I’m thrilled to say that MrB is receiving an honorary Doctor of Laws degree from Columbia University today. He’ll be a Columbia alum like me and his youngest daughter. There was a festive dinner last night to celebrate the honorees. All the honorees were fascinating, of course, but philanthropists Herbert and Florence Irving really stood out to me. They were married a few days after the attack on Pearl Harbor and will be celebrating their 72nd anniversary this year. And microbiologist Stanley Falkow is receiving an honorary Doctor of Science degree. He has been fascinated by bacteria since the age of 11. He said that he used to tell his mother about honors he got and she’d say, “Still with the germs?” When he said “yes,” she’d say, “Well, better you than some stranger I don’t know.” Ha! We all have that relative, right?

The other honorees were biographer Arnold Rampersad; Constitutional law scholar Laurence Tribe; and Professor Emerita Zena A. Stein, who was a pioneer of HIV prevention for women.

We took an outfit picture of me last night, but MrB will be the focus of all photography today! 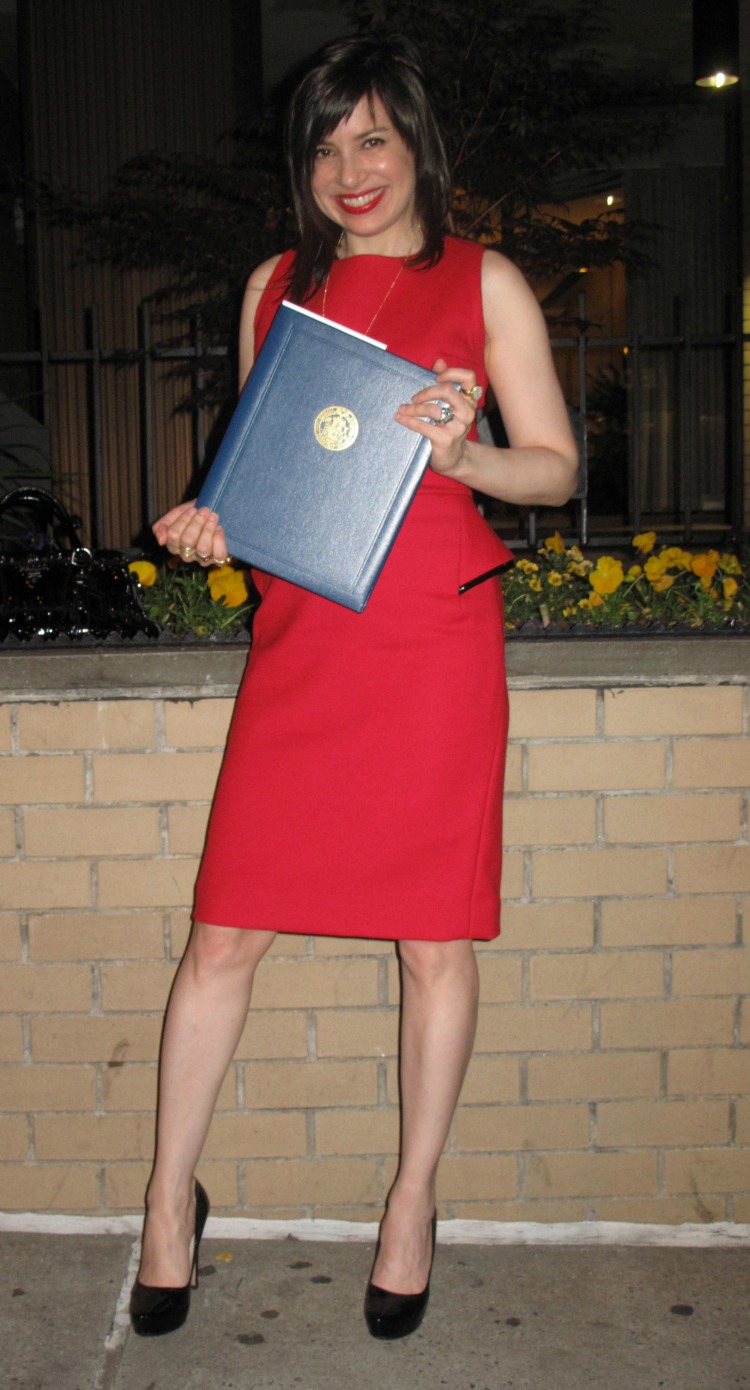 What Wendy Wore to Dinner
Dress: Stacy Lomman (2012)
Shoes: Prada (2010)
Jewelry: All my own designs
Clutching: MrB’s citation in its case, which FitzRoy sat on as soon as we got in the apartment