I first saw the singer Kerli at Lollapalooza in 2011, and I was very taken by her sound and her alien/anime/Lolita look.

I downloaded her music that night and I’ve kept an eye on her ever since so I was very interested when, this Monday, she posted two photos on Facebook. One was Beyoncé striking a pose in a spray-painted Amato Haute Couture for a just-released tour book; the other was an image of a very similarly styled Kerli wearing the same dress earlier this year. 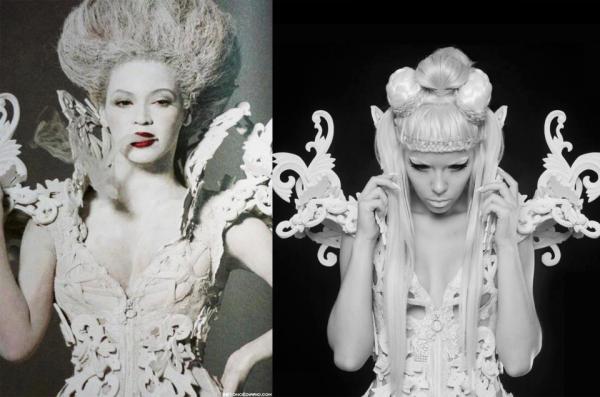 The day before Kerli posted that, I posted pictures of a costume-jewelry acorn necklace that was strikingly similar to a design I introduced in 2008. 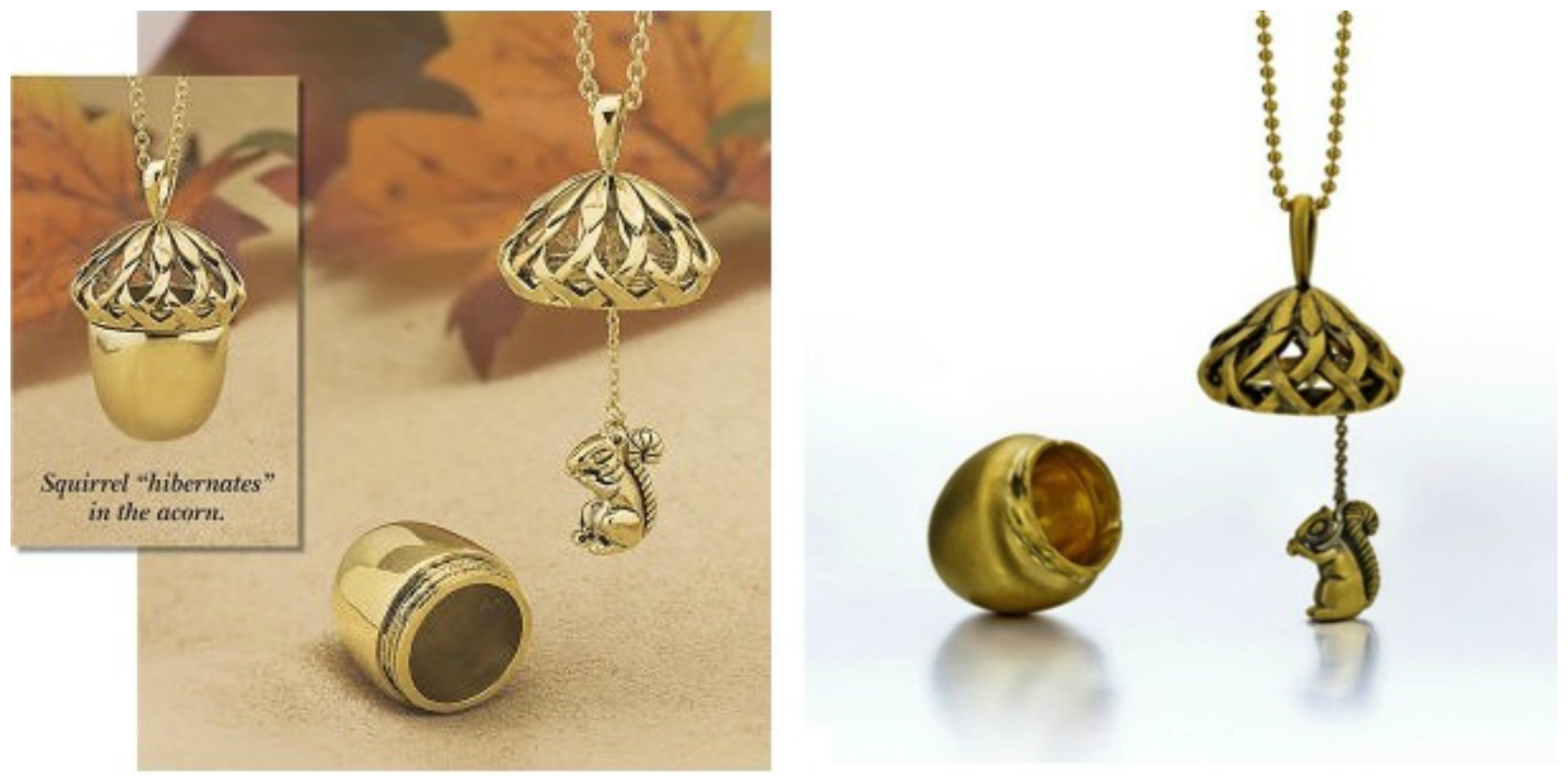 Theirs on the left. My original on the right.

The retailer has since removed the design from its website, and I’m chatting about next steps with the Rhode Island-based factory that produced the piece. Gotta say, I was surprised it was a U.S.-based manufacturer, but I wasn’t so surprised that he suggested that he did his acorn before mine. Maybe we were both studying Victorian mourning jewelry at the same time? Because that’s what inspired me. 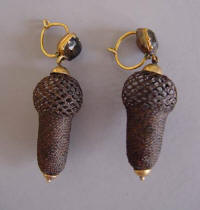 In creative fields, people are always taken inspiration from others. (There are also lots of examples of “great minds think alike.“) But at what point does inspiration become imitation? Billboard reviews several examples of Beyoncé’s inspirations while pondering the question in this op-ed piece.

One line in particular about Beyoncé jumped out at me: “…she’s playing off the risks that other artists have been brave enough to take…” That’s what makes it all so annoying. You take a chance and do something unusual and, once you’ve paved the way, someone else sweeps in and snatches up that idea without having to experience any of the pushback you got. The Billboard article claims that the artists who have inspired Beyoncé have been “appropriately praised for” their original ideas. I wonder if they feel that way. I never feel that way when I’m imitated. I’ve gotten love from my blog readers and my customers — and I greatly appreciate that — but where’s the “appropriate praise” from the stores and mainstream media that could lead to enough sales to keep me in business? The problem with being an underground success is that you’re still underground. In a Wall Street Journal article that I’ve mentioned before, “The Trouble With Being a Trendsetter,” scarf designer Elle Sakellis spoke about how her Otrera evil-eye scarves were knocked off by Raj Imports. She said,  “Everyone always says that imitation is the best form of flattery. But it happened too soon. I’m not Louis Vuitton. It’s not like when someone buys a Raj scarf that they know it’s an Otrera knock-off.”

At least Beyoncé’s inspirations get belated recognition if nothing else, because people love to call out Beyoncé and identify her source material. (I do think her Josephine Baker-inspired banana skirt was true inspiration/homage, and not imitation.)  By the way, I’m a Beyoncé’ fan and I’m going to see her Brooklyn show in August. She’s got so much going for her; would it be that hard to add a little more originality?

UPDATED TO ADD: I’m happy to say that the manufacturer of the acorn pendant has agreed to pay me a small royalty on sales. I expect it will amount to less than $200 for the year, but I’m pleased to get the recognition.

You might also like
Jennifer Aniston and Her Big Diamond Engagement Ring
Let WendyB Rate Your Shame
RIP, George Michael
Previous Post: « NYC Vice: Rings and Rap
Next Post: I Knew I Should Have Made That Ass Jewelry »