I already blogged about a lot of the concerts I went to this year — including Rihanna, Beyonce, Paul Simon, and Paul McCartney — as well as the music festivals Coachella and Desert Trip. However, there were a few performances that I didn’t get around to sharing.

One of those was Royce da 5’9″, whose album release party at S.O.B’s I squeezed in the night I flew to California for Coachella. If I recall correctly, I didn’t get home till after midnight from that show, and I had to leave for the airport at 4 a.m.! No regrets. 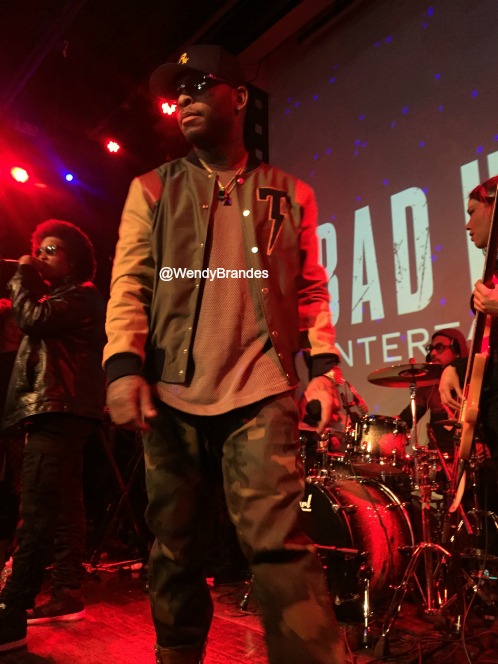 In May, I saw ’80s pop star Gary Numan, who had a huge hit with the song “Cars” in 1979. I only knew the robotic persona he assumed in the “Cars” video, so I was surprised when he turned out to be a rather sinuous dancer. 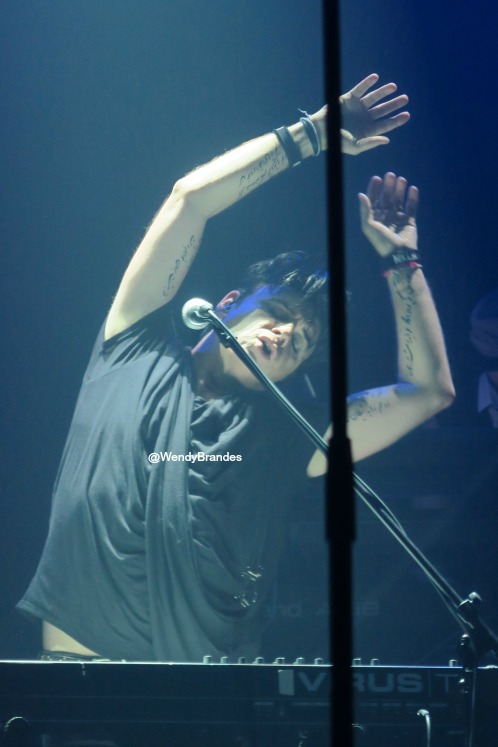 My friend Alyssa has a knack for winning tickets to random concerts at Madison Square Garden. Last year, it was Ariana Grande. This July, it was Radiohead. 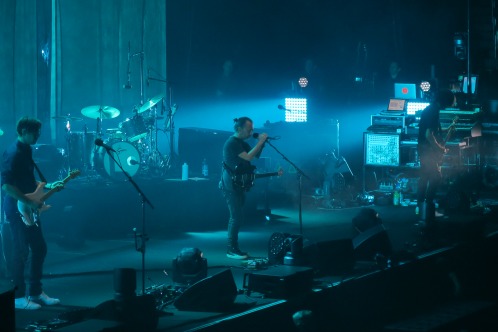 Thom Yorke of Radiohead is in this picture, I swear.

Also in July, my friend Stacy took me to see She Wants Revenge at Irving Plaza. They were good, but we agreed that their opening act, Raw Fabrics, was great. Jack Bruno, the charismatic lead singer, reminded us of a baby-faced Michael Hutchence. And we loved it when he plunged right into the crowd.

Very up close and personal with @rawfabrics at #irvingplaza …great performance!

One big event that I didn’t say much about was September’s Global Citizen Festival in New York’s Central Park, though I did share the story of the straw-hat argument. 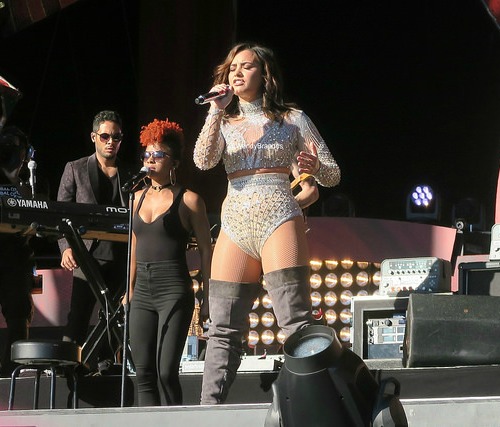 The acts were all excellent, but I didn’t feel like writing about the experience because I was so irritated by the crowd. Global Citizen is a free charity event to raise awareness of/fund programs to end extreme poverty. 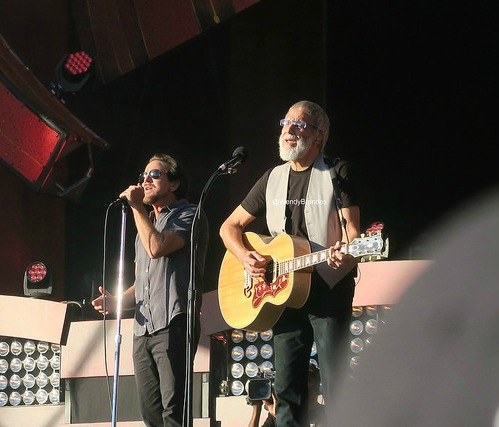 Eddie Vedder and Cat Stevens at the Global Citizen Festival.

When I went to the festival in 2014, the crowd was very pleasant. This year, the general-admission audience was rude and impatient, and waiting with a bunch of asshats from about 8 a.m. till the music started in the late afternoon was not fun. 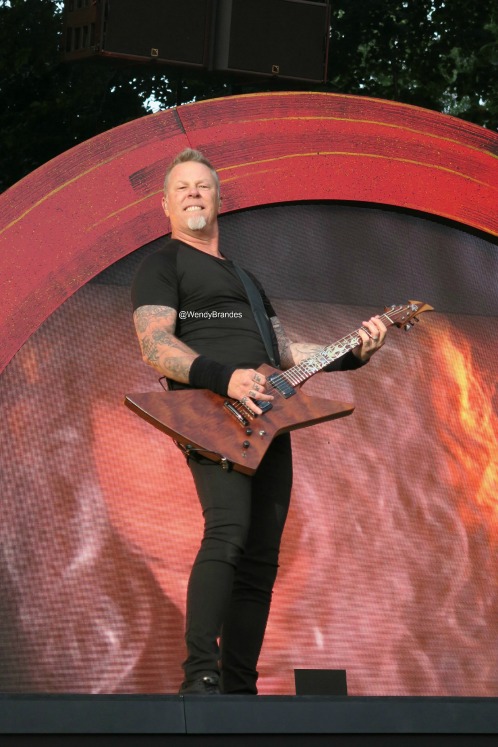 James Hetfield of Metallica at the Global Citizen Festival.

Celebrity and other advocates would come out and say something like, “Can I tell you about [XYZ issue]?”, people would yell, “NO!” At a charity event! Classy. 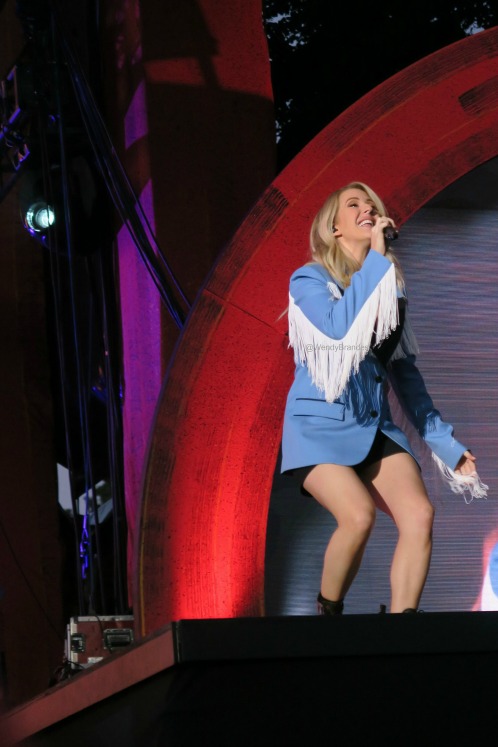 Early in the day, before the acts got underway, arguments were breaking out among people in the first couple of rows because because people in the first row insisted on sitting down on the ground and sprawling out, which pressed the rest of the crowd even closer together than they had to be. Some standing people were like, “You know, that’s inconsiderate!” and the sitting people said they were not being inconsiderate. It was their right to sit down. It was like having a debate with the gaslighting Donald Trump. At the end of the night, the view of the stage was blocked for me and a number of other people by a big straw hat. A woman next to me politely asked the hat wearer to remove her chapeau and that woman simply refused. Apparently, it was her right to wear that big hat even though it was now dark outside. 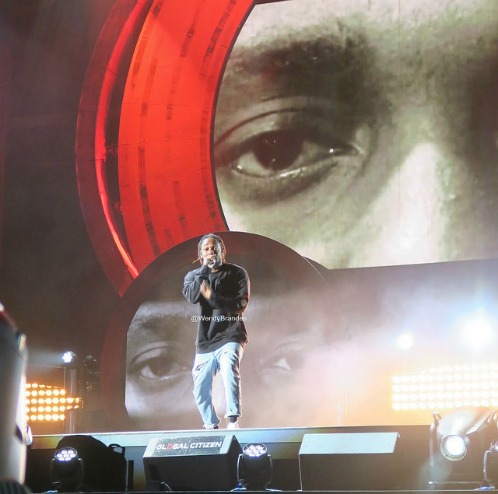 Rihanna, the headliner, was very late to the stage (especially for an outdoor event in the middle of the city) and that made the front-of-the-stage crowd even bitchier.  Props to Chris Martin for helping to keep the peace by coming out and improvising a song about Rihanna’s whereabouts. 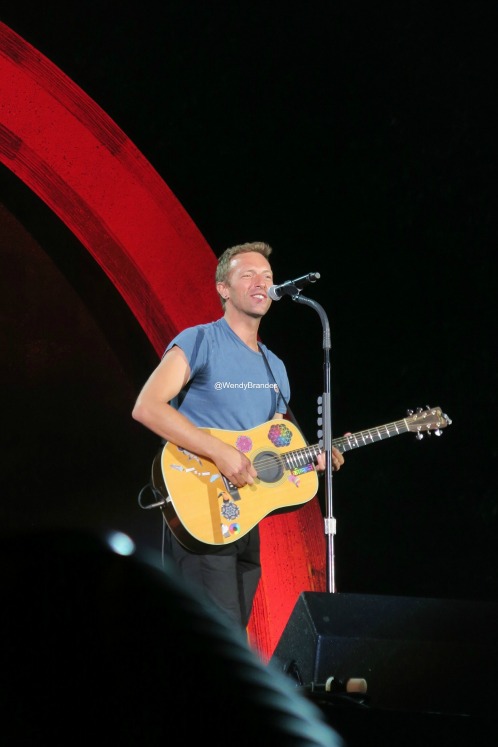 Chris Martin playing for time at the Global Citizen Festival. 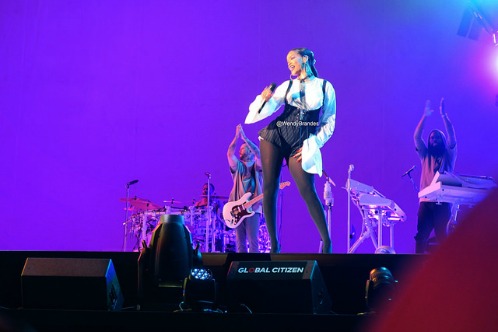 That blur in the right corner is the fucking straw hat.

… but I don’t know if I’d want to go to this festival again. There would need to be a performer that I’m utterly passionate about and can’t bear to miss, or a case of amnesia that would erase my memory of this year’s event. At least I got some good photos. You can see the rest of them here.

In October, when MrB and I returned from the much more enjoyable Desert Trip festival — held on the Coachella concert grounds in Indio, Calif. — I went directly from JFK to see my gorgeous client Skylar Grey perform at Le Poisson Rouge. 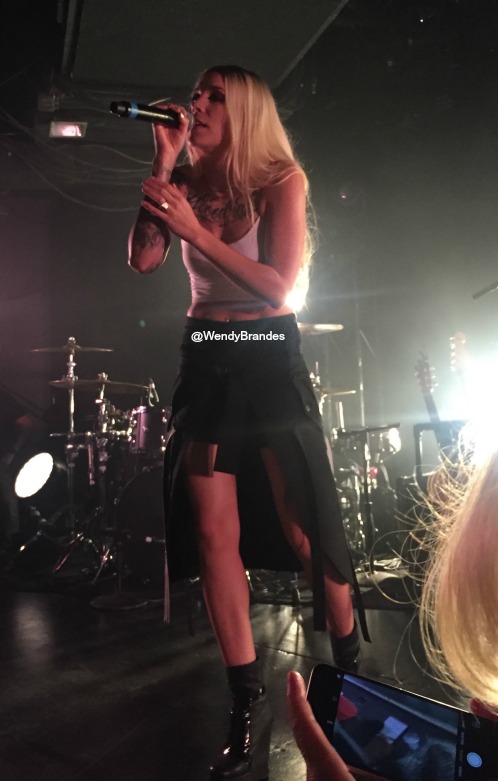 Later in October, I saw Sia hiding behind her giant wig at Barclays Center. I was so entranced by her April Coachella performances that I had to see her again. 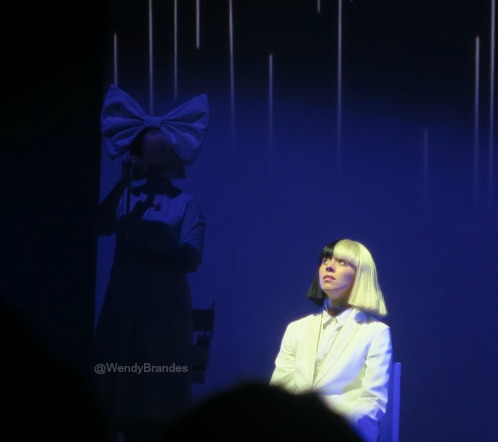 That’s the young dancer Maddie Ziegler in the front, while Sia can be seen lurking in the background.

I like Sia’s whole air of mystery. I think it works very well for her. And she has a cute sense of humor. The concert ended with a short video showing dancer Maddie Ziegler backstage, greeting all the people who worked on the show — dancers, crew, etc. — hugging them, saying “Great show!” and so on. Her last stop is Sia, sitting in a makeup chair, wearing her giant wig and acting totally unresponsive. As Maddie walks away, she shares an eye roll with Sia’s makeup artist … who is actually the real Sia, baring her face to the world and smiling.

I haven’t been to any concerts since November’s disastrous presidential election. My focus has been on political, rather than musical, events. Interestingly, all the concerts I’ve attended have prepared me for protests. I’m used to standing outside in all kinds of weather for 12 hours at a time, and singing/chanting at the top of my lungs. It’s strange how things work out sometimes!